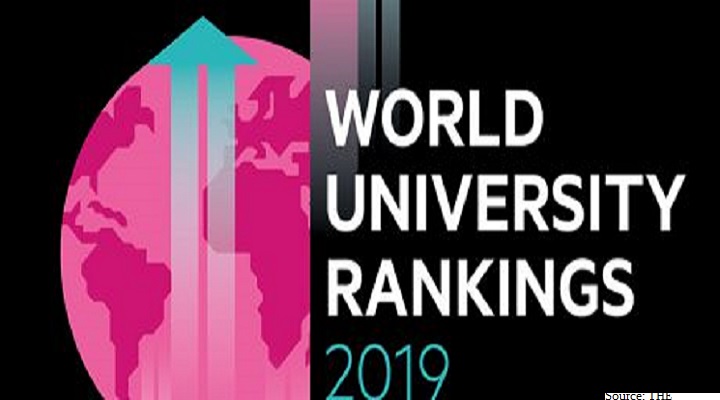 NEW DELHI, SEPTEMBER 26: As many as five universities from India have been ranked among the top 500 universities in the World in the Times Higher Education (THE) World University Rankings 2019. The Indian Institute of Science (IISc) Bengaluru is once again the best institution from India, which has been ranked between top 251-300.

The three public funded institutions recently granted Institutions of Eminence (IoE) status by the University Grants Commission (UGC), the IISc, Indian Institute of Technology (IIT) Mumbai and IIT Delhi with an aim to improve their international rankings have given the mixed response this year. The IIT Delhi has improved upon its previous year’s score but has been ranked between 501-600. While IIT Bombay has slipped from its previous year’s rank of 351–400 to 401-500 this year.

There are some surprises as well in the 2019 Rankings as the IIT Indore has been ranked in the range of 351-400 with an overall score of 41.7, the institute did not figure in last year’s Ranking. The IIT Roorkee has also improved its Rank and has jumped 100 positions from its previous years Rank to 401-500.

The UGC has also accorded IoE status to three private institutions, Birla Institute of Technology and Science (BITS), Pilani; Manipal Academy of Higher Education (MAHE), are the two institutions that are in existence. BITS Pilani and MAHE both have retained their previous year’s Rank with a slight improvement in their score.

Among the top universities in the world USA and UK dominate the top 10 places. While seven US universities take their rightful place in the top 10, University of Oxford and Cambridge top the list. Oxford retains its top position for the third consecutive year. University of Cambridge and Stanford University hold on to their second and third ranks.

The top 25 list remains more or less the same with two major exceptions; Tsinghua University improves 8 ranks to feature at number 22 and London School of Economics and Political Science which had previously featured at 25th position, is now ranked at 26th.

ETH Zurich, University of Toronto, Tsinghua University and National University of Singapore are the only non American and British universities which feature in the top 25 list.