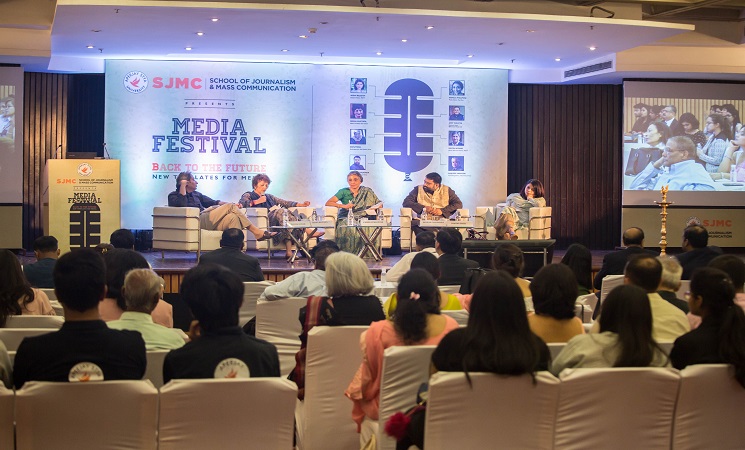 NEW DELHI, APRIL 26: The School of Journalism and Mass Communication at Apeejay Stya University Media Festival titled ‘Back to the Future’ concluded on a high note . The highlight of the festival was on the challenges facing media and how through interventions media could reclaim its lost ground. The festival brought under one roof media students, renowned media professionals and political party spokesperson.
The proliferation of social media, its misuse and the subsequent rise of fake news and the perils associated with it as well as the fact that mainstream media itself is going through a crisis were all highlighted during the course of the festival.

The event started with a token of appreciation from the President of the Apeejay group and Chancellor of Apeejay Stya University, Sushma Paul Berlia. She began by quoting lines by Patanjali “when you are inspired by some great purpose, some extraordinary projects, your entire thoughts break their bonds and you find yourself in a great new and wonderful world”.

Rajdeep Sardesai talked about how today news had changed from ‘informing’ to ‘viraling’. India today had over 400 news channel but ‘sense had been replaced by sensation’. Quantity is not quality and the news is being sold like movies. Social media is selling news like an echo chamber that could be actually propaganda of a party. To address the problem he suggested remedial measures.

This session was followed by a panel discussion on the topic on ’Does Media in India needs a surgical strike to get back on track?’ Moderated by Pamela Philipose, Public Editor at The Wire, along with, Editor-in-chief at The Citizen, Seema Mustafa, Rohini Singh from The Wire, Editor-in-chief at India News Deepak Chaurasia and Ravish Kumar, Senior Executive Editor, NDTV.

This was followed by a talk by Raj Chengappa, Editorial Director at India Today Group on the topic ‘Vision 2020: reclaiming the Fourth Estate’.

The festival concluded with a panel discussion on “Social Media: The New weapon of Politics,” moderated by Nidhi Razdan, Anchor and Executive Editor at NDTV, Spokesperson of Aam Aadmi Party, Ashutosh and Jaiveer Shergill, Spokesperson Indian National Congress took part in this discussion.

The festival concluded with all participants supporting the fact that media is changing and facing new challenges but there is still hope.  A journalist can still raise his voice and use social media platforms to effect change. And in doing so, they can still bring change and reestablish the influence of the fourth estate.