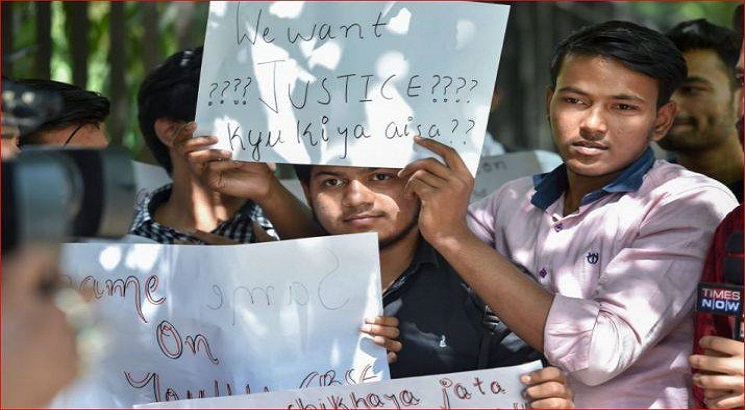 NEW DELHI, MARCH 31: The Union Government has clarified that the class 10 students of CBSE from the States and Union Territories other than Delhi and Haryana will not have to give retest in Maths. On the hand students and parents across the country have been demanding that there should not be any re-examination and if at all it is done it should be done for the whole country.

No re-exam of Class X except Delhi, Haryana

He further added that as far as Delhi and Haryana, where the police investigation is on, retest for Class-X Maths will be conducted only if investigation points to large-scale leak. There should be no confusion.”

The students and parents have been gathering in large numbers outside the Central Board of Secondary Education (CBSE) office in Delhi against the alleged paper leak as their anger is far from calming down. They have been demanding against re-examination as it would put undue pressure on students and might affect their final results. They have also been demanding the removal of CBSE Chairperson and other officials who failed to take necessary action on time.

One of the students Shubham Sharma who appeared for his Class 12 examination this year said, “Why should we suffer and face punishment of negligence of the board? We are protesting that either there should be re-exam of all the subjects or there should be no re-exam of only two subjects.”

Though the MHRD has clarified that there would be no re-examination of Class 10 for other states there have been reports of alleged leak reaching different parts of the country. A sample paper of Class 10 Maths surfaced in Bhopal which was almost similar to the leaked paper.

At the same time, Jharkhand police has registered an FIR in the paper leak case; Patna police has also detained several Class 10 students as they are likely to have received the leaked paper.

On the other hand, Delhi Police is also claiming that paper leaked through Whatsapp groups and would have got circulated across the country, thus raising a serious question on the recent announcement of re-examination for students of only Delhi and Haryana.

Reportedly, the Crime Branch of Delhi Police has identified 10 Whatsapp groups having as many as 50-60 members in each group through papers got circulated. The Police is also suspecting that the strings of paper leakage can also be linked to Sonipat in Haryana and Bulandshahr of UP.

Some of the experts and people formerly associated with the CBSE have also demanded that there should be re-examination for the two allegedly leaked Papers Economics (Class 12) and Maths (Class 10).  Earlier, the set of papers were different for different regions of CBSE, however, the Board discontinued this practice and started to have a single set of paper for the whole country. It is being said that had the previous practice being still continued the students from all over the country would not have to suffer in case of the leak from one region.