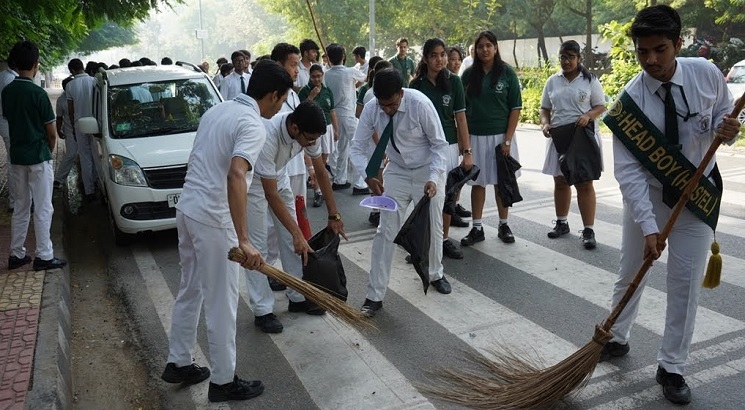 NEW DELHI, OCTOBER 3: On the occasion of Gandhi Jayanti, DPS RK Puram organized a cultural programme to commemorate the birth of the Father of the Nation.

The staff and the students cleaned the school area as a part of the scheduled Cleanliness Drive. The unparalleled zeal and enthusiasm of the participants was instrumental in helping to realise the dream of Mahatma Gandhi.

The event commenced with the administration of the Swachhata Pledge by the Principal, Vanita Sehgal following which she addressed the gathering. She emphasized the ideals of non-violence, Swachh Bharat as well as eradicating the caste-based system. She elaborated on how she considered Mahatma Gandhi to be the bravest and strongest man and expressed her admiration for his autobiography, My Experiments with Truth.

She spoke of his courage and conviction and his resolute beliefs which guided the freedom struggle and said that the country is what it is today, because of him. She also mentioned his staunch support of Women Empowerment as well as the abolition of the social evil of Untouchability. She concluded her speech with an enthusiastic Jai Hind which roused feelings of patriotism amongst the crowds gathered.