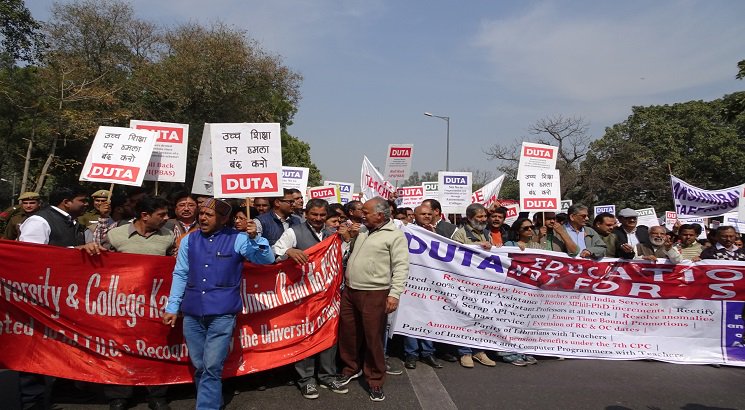 New Delhi: Over four thousand teaching and non-teaching staff of the University of Delhi marched from Feroz Shah Kotla to the University Grants Commission (UGC) protesting against the alleged negative recommendations of 7th Pay Revision Notification.

The teachers are alleging that as per the new funding formula to pay under the 7th Pay Revision the universities are being forced to generate resources to the tune of at least 30 percent.

The Delhi University Teachers Association (DUTA) said, “Teachers and karamcharis are anguished about the delay in disbursement of revised salaries as per the 7th Pay Revision. There is a growing fear it may get further delayed because of the 30-70% funding formula notified by the MHRD.”

As per the MHRD Office Memorandum (13.01.2017), the Central Universities are supposed to get only 70% of the enhanced financial burden on account of the Pay Revision, the rest to be met by the Universities through self-generation of resources.

“This is an unprecedented attack on the character of the public-funded institutions as it threatens to reduce funds to institutions of higher learning. Also State Universities have been allocated only 50% of Central assistance and that too for a reduced period of 39 months, i.e. till 31.03.2019, as opposed to the Central assistance of 80% for 51 months in the last pay revision,” DUTA alleged.

The teachers are of the view that withdrawal of public funding will push the burden of maintaining Central and State Universities on students, it will increase the expenditure of parents and students towards education manifold. Exponential fee hike will push a large section of students out of higher education.

The negative recommendations of 7th Pay Revision Notification have pushed teachers on a war-path. Withdrawal of advance increments for MPhil/ PhD will affect the career progression of teachers who will join the profession late but with higher qualifications.

The teachers association has claimed that it is also the first time that the report of the Pay Review Committee was kept in complete secrecy. The DUTA could get a copy of Chauhan Committee Report only recently through an RTI filed by a faculty member. However, even without making it public the Government had already set up another committee to look into the service conditions and it is not clear what the Government intends to do with promotional avenues for teachers.

According to them, teachers across the country have been denied promotions for the past 10 years because of the irrational API. Nothing short of a complete Roll Back of the API which has led to dilution of academic standards and downgraded teaching is acceptable. The retrospective implementation of API in Delhi University must be addressed and the issue of the counting of past services must be settled.

The DUTA has said that it now mobilise intensively amongst students and parents. The DUTA-DUCKU have now given a call of a Joint Rally from Mandi House to Parliament Street on 16 February, 2018.

The DUTA has started inviting students and students' organisations to join the movement. The DUTA will also mobilise Members of Parliament for the 16 February Rally. The DUTA warns the Government against anti-people education policies and negative service conditions.