Giving back to society through education 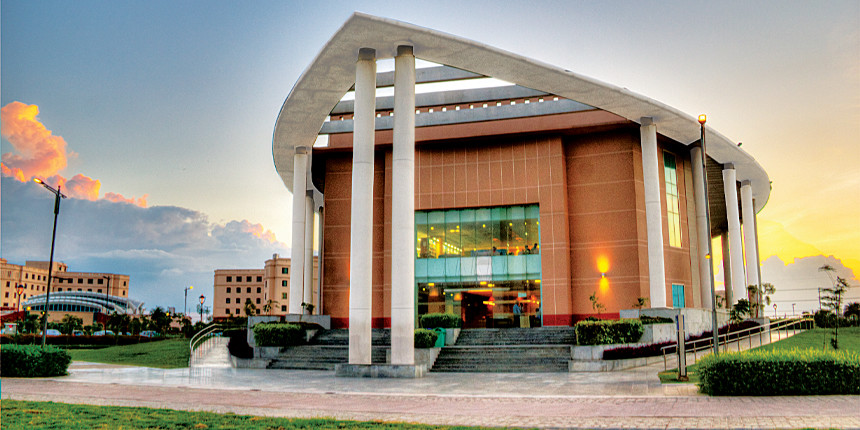 A multidisciplinary approach and research focus guide Shiv Nadar University, one of the leading higher education institutions built on philanthropy…

Less than a decade after its inception, the Shiv Nadar University (SNU) has already attained a respectable place in India’s higher education landscape. The fully residential university is located in Dadri near Greater Noida on a sprawling 265-acre campus. Within the green expanse of the campus is a well-structured and aesthetically-designed university that has built a unique identity of being a multidisciplinary and research-focused institution of higher learning that is developing and educating the path-shapers of tomorrow.

The SNU is founded on the principle that research, scholarships, and creative activity are fundamental sources of new knowledge that can contribute to the betterment of society and expressions of the human spirit. The university manifests an all-pervasive spirit of recognition and respect for the diversity of people and ideas, inclusiveness, a global perspective and a sense of community. 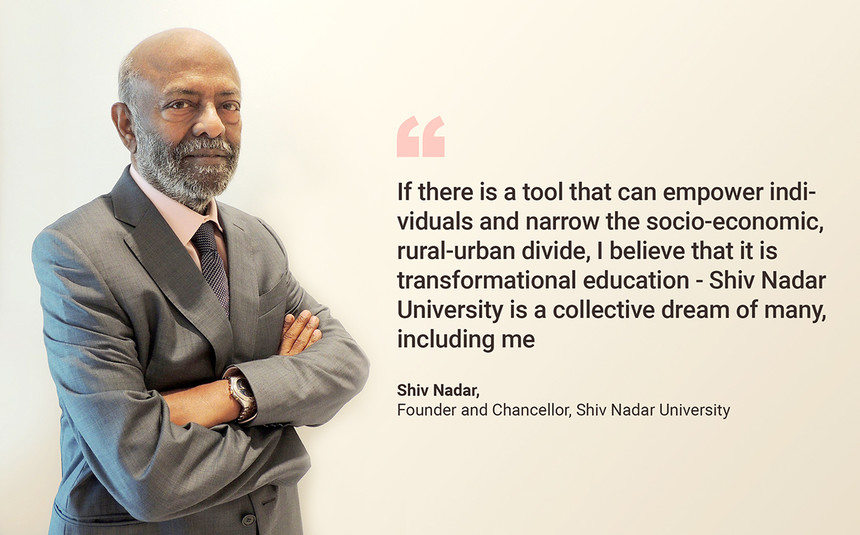 Established in 2011 by Shiv Nadar, the Founder and Chairman of the 8.6-billion dollar HCL Enterprise, SNU aims to drive transformative change in higher education in the country. The spirit of inquiry and intellectual curiosity coupled with critical thinking and a passion to solve societal problems characterise the thinking behind the creation of the university.

The SNU is one of the leading examples of personal philanthropy in India. It is completely funded from the personal wealth of Shiv Nadar, whose philanthropic arm, the Shiv Nadar Foundation set up in 1994, has so far invested Rs 1,838 crores in its operations. The creation of a new, modern, state-of-the-art higher education institution in Dadri is rooted in Shiv Nadar’s strong belief that many more institutions of higher learning are need to lead the country in the 21st century and beyond and that the private sector will have a significant role to play in the institution-building.

It was always going to take Shiv Nadar careful planning, a culture that he imbibed in the vast computing and Information Technology empire he built as a hallmark of modern India’s famed entrepreneurship in software sector to create SNU. Initially, he travelled to the United States and the United Kingdom with his two trusted colleagues -- his close friend Dr. Nikhil Sinha, the Non-Executive Chairman of the Board of Directors of HCL Infosystems (Dr. Sinha would go on to become the first Vice Chancellor of SNU) and HCL’s former Corporate Strategy President Saurav Adhikari -- to study different models of higher education.

In over a month of travel across the United States and the UK, Shiv Nadar was focused on finding out what is it that creates the alchemy of a great university.

First they visited the Oxford and Cambridge universities in the UK. The search for the right model for SNU continued in the United States where Shiv Nadar and his team went to Ivy league universities like Harvard, Yale and University of Pennsylvania, and Stanford University and University of California, Berkeley. “While visiting University of Pennsylvania, Devesh Kapur (who was Director of Centre for Advanced Study of India there) made a key point that a great university is one that creates more knowledge than it consumes,” recalls Sundar Mahalingam, Chief Strategy Officer of HCL Corporation and Shiv Nadar Foundation. Devesh Kapur’s words were to remain within Shiv Nadar, who also met the then Yale President and economist Richard C. Levin. Shiv Nadar also looked within his own environment, the SSN College of Engineering in Chennai, the first educational institution established by the Shiv Nadar Foundation in 1996, for inspiration. In 2011, the Shiv Nadar University was born with a multidisciplinary, research-based education model.

“Indian education has been about a set of curriculum and pattern with no exposure to other courses. He (Shiv Nadar) heard a lot about the multidisciplinary model when he travelled across the United States and United Kingdom,” says Mahalingam. The subsequent vision paper prepared by a vision group had two main elements: to make SNU a multidisciplinary institution and the need for research.

“I was amazed by the vision paper prepared by Shiv Nadar that had a multidisciplinary model with focus on exploration and guidance for young India. We don’t lack human resource in India. But our demographic dividend will become a demographic disaster if we don’t train our youth in the right way. The challenge of SNU was my attraction,” says SNU Vice Chancellor Prof. Rupamanjari Ghosh, a renowned physicist who was Dean, School of Physical Sciences at Jawaharlal Nehru University, Delhi, before she joined SNU.

Long before the birth of SNU, the best advice Shiv Nadar has ever received had come from his mother. Vamasundari Devi told her son, who had become a globally renowned industrialist, that he should get into philanthropy now that he had made some money. The hugely successful entrepreneur decided to follow his mother’s advice in letter and spirit.

“He wanted to give back to the society and the first thought was education,” explains Mahalingam. Shiv Nadar, who studied engineering at Coimbatore’s PSG College of Technology, carried the memories of his own learning. The philosophy behind the Shiv Nadar Foundation, which has also set up a string of schools, was his belief that the most powerful influence on an individual was their education. His decision to give back derives from the philosophy of ‘creative philanthropy’, a powerful model that envisages creation of institutions that go beyond the lifetime of its founders and continue to impact future generations for many centuries to come.

As of 2018, Shiv Nadar’s philanthropic efforts have seen him investing close to US$800 million through the Shiv Nadar Foundation, impacting over 25,000 students directly. The Foundation set up the SSN Institutions in 1996, comprising the SSN College of Engineering, a highly ranked private engineering college in India, in Chennai. In 2009, the Foundation set up VidyaGyan, a residential leadership academy for meritorious rural children at Bulandshahr and Sitapur in Uttar Pradesh. The Shiv Nadar School established by the Foundation is a network of progressive urban schools across India aimed to provide children with education that creates lifelong learners. In 2010, the Foundation set up the Kiran Nadar Museum of Art, India’s largest private philanthropic museum in modern and contemporary art with the vision to take art to the common public.

While philanthropy is a norm in the United States where big industrialists donate large amounts, India is yet to mature in personal philanthropy, says Mahalingam, who has been with HCL for the past 14 years. “In India, a lot of people, especially young entrepreneurs, have started donating their personal wealth and the trajectory of philanthropy is really increasing. Most of the focus is on education and healthcare. These are the areas where money is flowing in,” says Mahalingam. “As one of the first private universities built on philanthropy in recent times, the SNU finds itself in a good position. Our ambitions are large. We want to be the best in the world.”

Philanthropy initiatives are necessary for experimentation for excellence, says Prof. Ghosh. “Science and Technology research is extremely expensive. That is why the country needs philanthropy in higher education,” she adds. SNU’s ultra-modern research facilities and interdisciplinary centres are attracting the attention of students and teachers driven by the passion to solve the problems faced by the society. For example, SNU is focused on creating a network of water professionals to address the water crisis facing the country. “Academicians can’t stay insular to our societal problems,” says Prof. Ghosh, who is known for her pioneering work with American physicist Prof. Leonard Mandel in quantum optics and quantum information.

Research is built into SNU’s academic programmes from the undergraduate level. The four-year undergraduate courses by the university’s four schools -- School of Engineering, School of Humanities and Social Sciences, School of Natural Sciences, and School of Management and Entrepreneurship -- reflect the attention for research with programmes such as B.A (Research) in English and B.A (Research) in History. “Research is part of our vocabularly. If you find the passion for research, the likelihood of excellence is more,” says Prof. Ghosh. “We channelise the students in the country’s future.”

In the PhD programmes, an SNU student receives a monthly stipend of Rs. 50,000 for the first two years and Rs. 55,000 for the next two years. There are 176 students pursuing PhD programmes on the SNU campus, a high ratio compared to the total number of students (2058) at SNU. So far, 38 students have graduated with PhDs from the university.

The university has assembled the “right kind of faculty” with an industry, academia and international faculty mix. An international campus, residential facilities for students and teachers, and a greater faculty-student interaction combined with the passion of students to take up courses that would address societal problems has been the reasons for the university making a mark in the higher education sector in the country in a short time. Shiv Nadar’s vision to nurture the spirit of inquiry and intellectual curiosity in the students is also aimed at SNU becoming a campus where poets emerge from the field of mathematics and economists come out of the engineering department.

The SNU is among the 20 public and private universities across the country recommended for the prestigious ‘Institute of Eminence’ status by the University Grants Commission. When it is granted, it will be a recognition that is sure to spur the pursuit for further milestones for the university. In the National Institutional Ranking Framework (NIRF) rankings for 2019 carried out by the Ministry of Human Resource Development, SNU was ranked 52 under the ‘University’ category and 77 under the ‘Overall’ category.

The university has opted for inclusiveness and diversity on campus. Two kinds of scholarships -- one merit-based and the other for students from rural areas - ensure free tuition and boarding for students. Shiv Nadar himself has credited his success to the education and scholarships he received during the early years. At present, 27 states and Union Territories are represented on the fully residential campus where laboratories are open round-the-clock. The faculty comprises teachers
mostly from IITs, Indian Institute of Science, Bangalore, and post-doctoral Indian students returning from universities abroad. 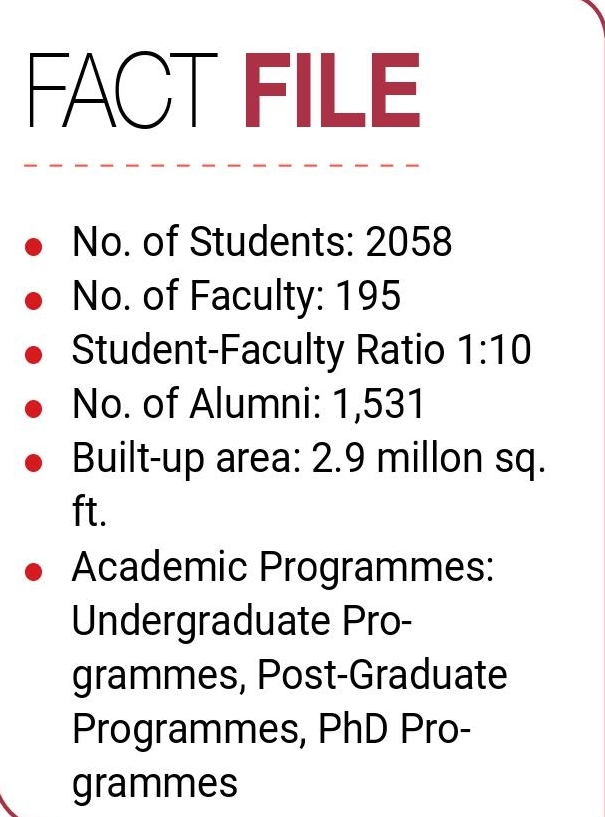 The university is also contributing to local development and sustainability. The Dadri village in Gautam Buddha Nagar district of western Uttar Pradesh, where SNU is located, is a cauldron of bio-diversity. In a committed outreach programme, the university aims to strengthen the local schools, giving a fillip to education in Dadri and surrounding areas. The university magazine is named after the teal bird commonly found in the region. The SNU has already published a book on the region’s biodiversity, titled ‘Illustrated Flora: Part of Western Uttar Pradesh and Delhi NCR, India’. Conservation of indigenous knowledge of the elderly in the region is another step. There will be a book soon on the folk music of the region.

There are several challenges too. “Getting the best faculty from the pool available in the country is a serious challenge. We also need more PhD students, the best in the country on our campus. The big story is research. That is our greatest challenge,” says Mahalingam. The good news is that the Shiv Nadar family is closely involved and keenly looking at the SNU for academic excellence. All the four trustees -- Shiv Nadar, wife Kiran Nadar, daughter Roshini Nadar Malhotra and her husband Shikhar Malhotra -- of the Shiv Nadar Foundation are driving the mission from the front. For an institution rooted in philanthropy, that is a big foundation for success.