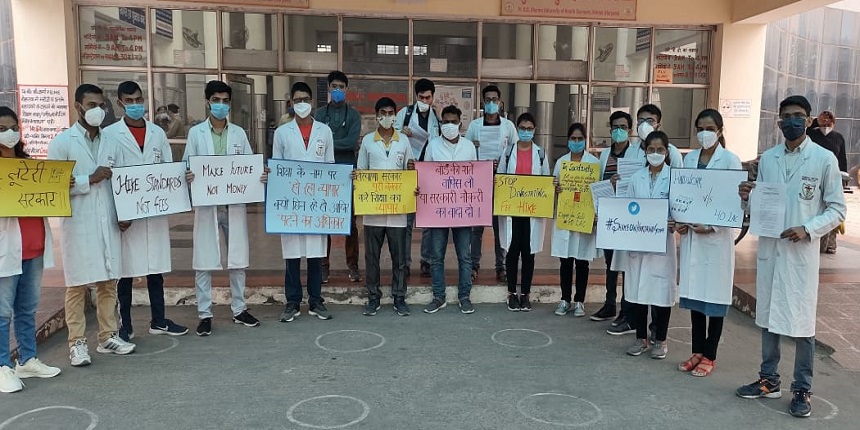 NEW DELHI: The recent fee hike announced by the Haryana Government has caused a huge political and academic storm in the state with opposition parties joining medical students and aspirants and protesting. The cost of studying medicine at a public medical college in Haryana has increased sharply. The fee itself has risen by over 40% and now, candidates have to also submit a “bond fee” annually, bringing the total cost to around Rs 10 lakh per year. Students and politicians are demanding that Haryana’s BJP government rollback its November 6 announcement.

Sahil Sharma, a student of Pt. BD Sharma Postgraduate Institute of Medical Sciences (PGIMS) Rohtak said: “Students sit for one of the toughest examinations to get into a good medical college, it also includes students who are poor and they score well to get into government medical college as the fee is nominal. But Haryana has increased the fee from Rs 56,000 to Rs 80,000 per year plus the bond fee. This will prove detrimental for students from economically weaker sections.”

As per the policy, the annual bond of Rs 10 lakh shall be paid at the start of each year. “Students can either take an education loan from banks/NBFCs for this purpose or pay the lump sum amount (loan plus annual fee) themselves,” says the notification. 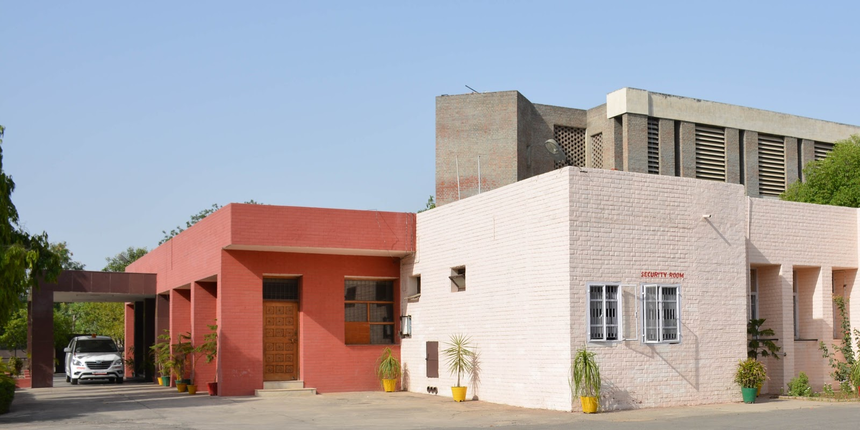 On completion of the course if a student gets a job with a state-run institution, the Haryana Government will pay back the bond amount in addition to the salary. However, the student has to work with the state-run medical institution for a minimum of seven years.

However, as students point out, despite placing a massive financial burden upon students, the government is not promising them jobs once they emerge from the programme.

The students are also miffed on the clause that when the government is not ensuring them jobs after getting a degree, why they are being forced to pay the bond. “As per the revised structure, if a student works in a government hospital after graduating, the state government will pay back the bond. But the government is also saying it will not take responsibility for a student getting a government job. In consequence, the student will only get into trouble,” argued Mohit Gurjara, a final year MBBS student. 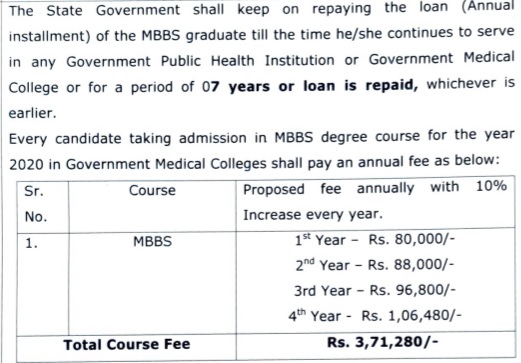 The national secretary of the Indian Medical Association’s youth wing MSN, Simran Kalra, has demanded that the government should cancel this new MBBS fee policy immediately and restore the “service bond” under which the state provides service stations to students after MBBS.

Ritanshu Sethi, state convenor of IMA-MSN told Careers360: “This is a completely wrong policy and due to this, talented students from Haryana will have to move to other states. Middle and lower-middle-class students of Haryana will not be able to give Rs 40 lakh for admission in government medical colleges as currently, 75% of the students belong to these classes. Only the rich will be able to study medicine in Haryana.”

On the other hand, the state government is defending its decision and also claiming that as the fee of medical education had not been increased for long the decision has been taken. Chief minister Manohar Lal Khattar has stated that compared to other states, the medical fee is still “very minimal” in Haryana. Khattar has said that the bonds are being introduced to increase the inclination of students towards working in the state.

Students also want the government to clarify its stand on what will happen to a student who is not able to get a loan after being admitted into a medical college. As the government notification does not mention any relief for students taking admission under the reserved categories for the historically marginalised communities.