How an electronics repairman became a scientist at a top university 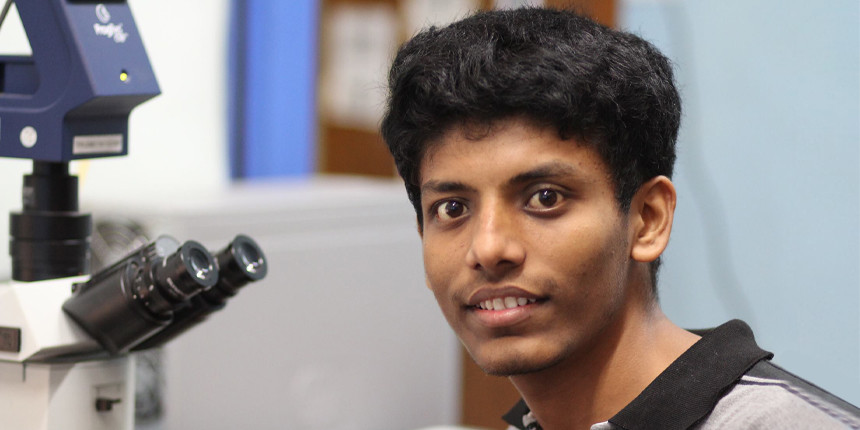 New Delhi : If Jayakumar Vaidya hadn’t stood up to adversity, it would have trampled him. Like it does to thousands of marginalised people everywhere, especially in sprawling Mumbai. But he survived. From the slums of Kurla in east Mumbai, he made it to the University of Virginia in the United States. He is now a graduate research assistant there, an enviable role even for the privileged.

“I lived in a slum in Kurla and was accustomed to the fast-paced Mumbai lifestyle,” Jayakumar, 24, told Careers360 explaining why he had no trouble fitting in at a well-regarded American university where every minute counts.

A ‘messed up’ house

Jayakumar grew up in a 10-by-10 shanty in Kurla with his mother Nalini and grandmother Sarla Harikant Trivedi. Nalini was a single mother and the only earning member. “My mother was struggling to make ends meet,” he recalled with a tinge of sadness. His mother did odd jobs in people’s homes and cooked rotis for a businessman to supplement her income.

“My mother is one of the strongest women I know,” said Jayakumar. “She single-handedly earned for me and my grandmother. She was always working hard to make ends meet, for as long as I can remember. The world is not kind to a single mother.”

There were no sanitation facilities near their shack. It was also next to a main road, filling his life with dust and noise. “I used to have breathing problems as a child. It would also get horribly hot in the summer and really cold in the winter,” he said. But the Mumbai monsoons were the worst. The Kurla slums were frequently flooded. “Our house would be all messed up,” he said.

Jayakumar’s earliest memories of school were of “getting into trouble for paying fees late”. He attended Michael High School, an English-medium private school in Kurla, that his family struggled to pay for. Many a time his mother could not meet the fee deadlines. “The school authorities would frequently pull me up, as I could not always pay the fees on time,” he said.

Financial hardships did not deter him. His brilliance showed in school examinations in which he excelled. In fact, he did so well, one year he was made class monitor.

But his school life was not all he attended to. As soon as he was old enough, he extended a helping hand to his mother. As a 13-year-old, he took up odd jobs to help her. “I started off by working in an electrical repair shop,” he said. He fixed old television sets and fans, earning Rs 4,000 per month.

When he grew up and entered college, it was time to use his education to earn. He became an online tutor and a popular one at that. “For the past few years, I have been supporting my family fully, and my mother is taking some well-earned rest!” he said.

His brush with electronics and electrical appliances to make a living influenced his academic decisions as well. “My early jobs induced a keen interest in analog electronics and robotics in me, which I am currently looking forward to pursuing,” he said. “During my college days, I managed to get some second-hand electrical appliances for the house. I would routinely fix them as we couldn’t afford to get them repaired by others.”

Jayakumar studied electrical engineering at KJ Somaiya College of Engineering in Mumbai. A private college, its programmes were expensive for him. But a bright student, he was able to secure multiple scholarships from various sources and keep going. “Thankfully, with a lot of searching and some help from very kind people, I could complete my engineering,” he recalled.

His friends' circle was limited but he forged strong bonds with the few he made and continues to be in touch with them. His singular goal, claiming all his energy and attention, was education. “I would forget to sleep and forgo meals, but made sure I studied. I thoroughly enjoyed what I was studying, so it felt natural. I would watch NPTEL video lectures to solve doubts I had and would study regularly,” he said. The NPTEL is an online learning programme run by the Indian Institutes of Technology.

Working in the robotics team, studying hard, and tutoring took up most of his time in college. “I barely had any time for myself (but) I made some well-cherished friends while I was working really hard,” he said.

After graduation, Jayakumar first interned with a major infrastructure firm. Later, he joined the Tata Institute of Fundamental Research (TIFR) as a researcher.

“I joined as a research assistant in the nanoelectronics group at TIFR,” he said. “I worked on crystals of ‘Weyl semimetals’. These are crystals that show some interesting properties and have very interesting electrons that behave differently from conventional electrons in metals.”

Eventually, he was able to make unique devices that could probe these systems well, a big step forward in understanding their behaviour.

Jayakumar credits his success at TIFR to his mentor, Mandar M Deshmukh of the Department of Condensed Matter Physics and Materials Science. “He is one of the most inspirational people I’ve ever met,” said Jayakumar. “His energy and love for science, and incredible kindness all made me want to work towards becoming more like him. He has helped me a lot, and I would frequently consult him for advice. I am very grateful for his guidance.”

Off to West Virginia

Jayakumar left Mumbai for University of Virginia, West Virginia, in 2018. “Life at Virginia is great!” he said. “The teachers here are very driven and dedicated to their work, and the facilities are exceptional.” He intends to use them to the maximum to improve his knowledge and skills. “The person I am currently working under is also very hard-working and motivating. I intend to learn a lot from him.”

He has big plans too. “One of my goals is to make India a superpower with cutting-edge technology and jobs for everyone and hopefully, even managing the climate crisis,” he said.

While he dreams big, he is also nostalgic about his childhood. “My earliest childhood memories involve being taken care of by my grandmother,” he said. “We were very close and she meant the world to me. She used to feed me, bathe me, put me to sleep. Even now, I miss her a lot. She would tell me a lot of stories about great heroes, people who have done great things, and always keep me engaged.”