How important is English for a career in law? 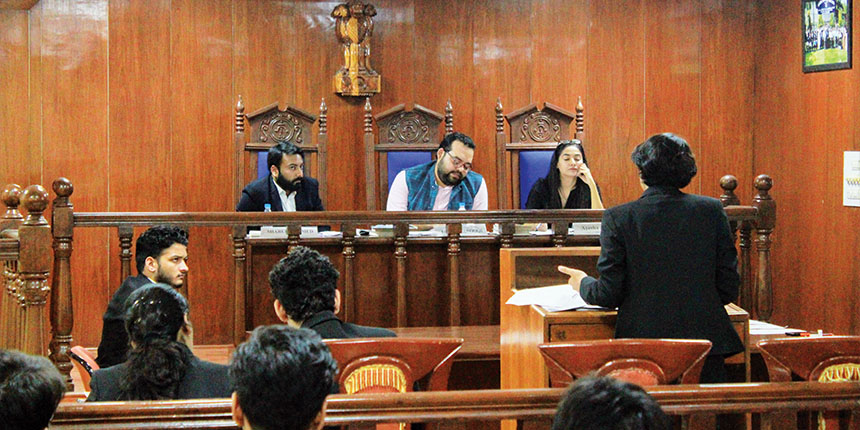 Sagar Pattanashetti’s dream is to become a judge but he fears his chances might be slim. The third-semester student of B.V. Bellad Law College in Karnataka’s Belgaum district is studying law in his mother tongue, Kannada. “I want to become a judge but I’m finding it tough,” he said. “I studied in Kannada medium all through but feel I need to know English well. Once I am through with my semester examinations, I will take coaching next year to improve my English.”

Pattanashetti’s concerns are valid. Without the basic skills in English, a lawyer who has studied in a vernacular medium can only go so far. While practicing law in the local language helps certain groups of clients, the lawyer himself has to be reconciled to spending his entire career practicing in the lower courts. For judges, knowing English is almost essential.

The most recent iteration of the draft National Education Policy 2019 suggests that state law colleges consider offering bilingual education for future lawyers and judges – in English and in the language of the specific state. The document says: “A host of measures will be undertaken such as, inducting teachers who are well versed in the regional language as well as English, making textbooks and study materials available in both languages, and allowing examinees to write their examination in either medium”. This, the draft education policy argues, will “alleviate delay in legal outcomes consequent to need for translation”.

Legal education has been imparted in regional languages by some colleges for over three decades. But opportunities for these students have not expanded.

India’s legal system and education are legacies of its colonial past. Legal education was formally introduced in India in 1857, in three universities – Calcutta, Bombay and Madras. Anyone who learnt English was eligible to study, qualify and practice law.

As India followed the British judicial system to a great extent, the Indian legal lexicon includes a range of terms in English.

The legal education regulator, Bar Council of India, requires English to be included as a compulsory paper in all courses in law, even though the course itself can be delivered, and students tested, in any medium. This holds even for the three-year LL.B programme.

Most professionals working in urban areas agree English is a better medium than a regional language to study law in.

“Those who practice in the judicial line, English is of utmost importance,” said Siddhartha Mukherjee, vice-president, Bar Council of West Bengal.

It is required “in the long run”, said P Ishwara, Vice-Chancellor, Karnataka State Law University. He added: “It has been seen that most of the students catch up with the English language pretty well as they successfully complete their respective courses.”

In the mother tongue

However, studying law in the mother tongue helps students who want to practise law in lower courts and in their native places. The litigants also benefit as they can follow the proceedings with greater ease.

At the same time, it limits the lawyer’s career prospects as litigation in the regional language is possible only till the district courts. “Practice at the lower level at the mofussil courts, it [in the local language] can be possible and this could be permissible,” said D Shankar, who teaches at the Tamil Nadu Dr. Ambedkar Law University. “After that it is not possible,” said Shankar. He also believes that it is “more appropriate” to use English while presenting cases to the judiciary.

There are other challenges as well. While there is an abundance of study material in English – judgments, analyses and other material – several teachers pointed out that there is a shortage of material in regional languages. “They [students] refer only to limited material and somehow pass the examination,” said BS Reddy, principal, RL Law College, Davanagere, Karnataka. “It does not help them in any practice. It is just examination-oriented, not practice-oriented.”

This impacts the quality of lawyers emerging from the vernacular system. “Law should be taught in English only as all the necessary materials are in English. Because of the language problem, so many advocates are incompetent and unable to conduct cases properly,” said Naik Krishnappa Bhimappa, chairman, Karnataka State Bar Council.

Students have felt the need for more study material in local languages and better translations. Lack of English skills leads to problems even for those who join English-medium law colleges from vernacular-medium schools. They face problems drafting legal documents, they said.

“There are students who face a lot of difficulties with the language but are scared to say it in the class,” said Arijit Gupta, a third-year student of Shyambazar Law College, Kolkata. “These students have a phobia of speaking out in class.”

Poor quality translations of reference documents mean bad performance in exams. “In the previous semester, we had Company Law. It was amended recently and suitable material was not available [in Kannada],” said Soham, a fourth-year student of RL Law College in Devanagere, Karnataka. He and his friends tried to get the material translated online but the quality was “pathetic”. In consequence, “they get low marks in exams and get depressed about the university evaluation,” he said.

Professionals agreed. “We must work on legal books in local languages,” said Patel Chelabhai Karsanbhai, chairman, Bar Council of Gujarat. “We don't have the books now but we should soon start working on that,” he said.

“The main problem is that students who come from Bengali-medium programmes tend to lose confidence near their English-speaking counterparts in the courts,” said Siddhartha Mukherjee, from the West Bengal Bar Council. “They may know the subject well but since they cannot counter [effectively] in English, they cannot excel. There is a gap, though they are educated. They cannot speak English well and, therefore, they get left behind.”

To be a judge in a district court or a sessions court, knowledge of English is still important because they need to refer to other judgments to follow
legal precedent.

“All of them [judges] know English because all the judges refer to judgments of the Supreme Court and state High Courts and those are primarily written in English,” said Ashwini Kumar, an advocate in the District and Sessions Court, Gurugram. “They [judges] are also well-versed in the local language. When they give the verdict, it can be in the vernacular language also.”

Shilpa Kambale, Pattanashetti’s classmate, wants to be a lawyer and later a judge. “I want to become a district and sessions judge,” said Kambale, who possesses just a smattering of English. “I know I will manage.”

Till 1986, the first law degree was a three-year professional programme. To be eligible to apply, candidates needed just a basic degree in any discipline. That changed with the birth of the National Law School of India University (NLSIU), Bengaluru, which introduced a five-year integrated programme that students could join after school. Now, all the National Law Universities — there are 22 across the country — offer five-year integrated programmes. These coexist with the tradition three-year LLB courses.

With the NLUs encouraging specialisation in certain disciplines of law, graduates emerging from them do not always follow the traditional course of becoming trial lawyers. They are in demand as policy planners, corporate lawyers, negotiators and business advisors. Students, too, are increasingly gravitating toward these roles and the generous salaries they usually fetch. “Of all the graduates coming out after five years, probably 80 to 85 percent is joining corporations,” said Karsanbhai.

This change, too, has resulted in English getting a collective thrust even though both practitioners and litigants in rural areas prefer the local language for the transaction of legal affairs.