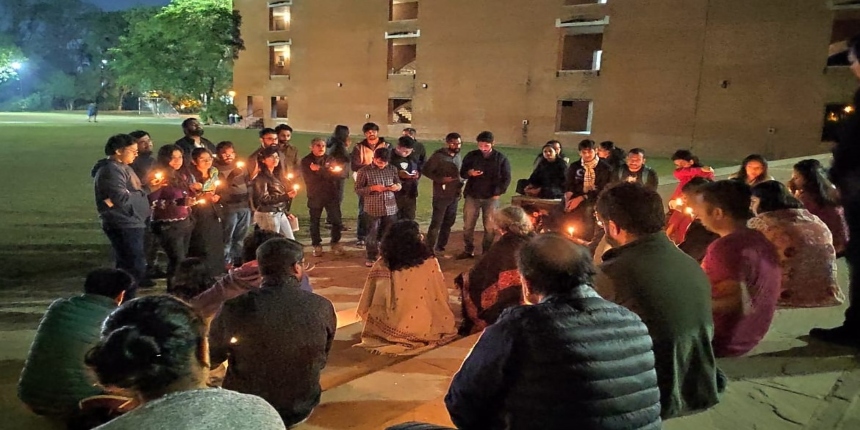 NEW DELHI: Over 100 students, research scholars, teachers and alumni of Indian Institute of Management – Ahmedabad have issued a statement “against the suppression of democratic expression of dissent”.

The statement, circulated on January 5 and 6 and made public on Tuesday, has criticised the “violence unleashed by police on unarmed students”, the practice of shutting down the internet in protest zones and the “arbitrary and continued imposition” of Section 144 of the Code of Criminal Procedure in various parts of the country, including Ahmedabad. The section prohibits the gathering of more than four persons at a place and has been used widely and over vast expanses of territory in an effort to quell protests against the Citizenship Amendment Act 2019.

Passed in December, the CAA makes the grant of citizenship contingent on the applicant’s religion and specifically leaves out Muslims. There have been dozens of protests – small neighbourhood gatherings and massive rallies – across the country against it.

The statement urged law enforcement authorities “to only use proportionate force to restore law and order in accordance with the established procedure, and not as a tool of intimidation against certain groups”.

Calling for police reforms, it says: "It is the duty of the state to protect and enhance our civil liberties not only in letter but also in spirit. We further encourage the State and Central government to carry out urgent reforms as outlined by the Supreme Court (of India), Bureau of Police Research and Development, the International Committee of the Red Cross and, Criminal Justice Reforms as outlined by the Law Commission of India, for better realisation of civil liberties in India.”

This is in reaction to police action, not only to students agitating against the CAA across campuses, but also to incidents on the IIM-A campus itself.

A campus that rarely sees any protest, IIM-Ahmedabad has seen an uncommon amount of activity since December 15. That Sunday, Delhi Police attacked protesting students in Jamia Millia Islamia University and Uttar Pradesh Police outdid their effort in Aligarh Muslim University the same night. On December 16, protesters at IIM-A, including several students were detained by the police.

Then, on January 5, policemen in civil dress allegedly entered the campus to “disrupt” a meeting of students and teachers who had gathered to discuss citizenship, democracy and dissent. A student told Careers360 that the police called a professor “told him that they cannot use the word democracy”. The students sang songs and read the preamble of the Constitution. The director of the institute was informed about it after which the police left the campus premises. The same evening, groups of men and women with their faces covered entered Jawaharlal Nehru University and beat up students and teachers. One of them, Sucharita Sen, a professor in the Centre for the Study of Regional Development, has filed a police complaint.

Another premier institute, Indian Institute of Technology-Bombay, criticised the violent attack on JNU students. The faculty of IIT-B released a statement on January 6 condemning the "systematic attacks on all institutions, including academic ones". The statement, which has received over 161 signatures, said: "We have watched with dismay the failure of universities and other academic institutes to protect their members, the cases are too many to be all listed here but, along with JNU we name Aligarh Muslim University, Banaras Hindu University, and even Jamia Millia Islamia University where the administration has vocalised its attempt to defend the students." Reiterating "the intellectual autonomy of academic institutions" the statement upheld the necessity of debate, dissent and the right to protest democratically.

The IIM-A statement has also criticised the practice of shutting down the internet at protest sites and, often, entire cities to frustrate efforts to mobilise. The statement said: “Digital freedoms constitute an important part of the fundamental constitutional guarantees of privacy, liberty, peaceable assembly and free expression.” It cites the findings of the non-profit Access Now, which “indicate that India saw 67% (134 instances) of all internet shutdowns in the world in 2018”.

It also pointed out that apart from the disruption of civil life and access to emergency services, there are "clear economic costs of such blackouts". The IIM-A is one of India’s premier business schools.