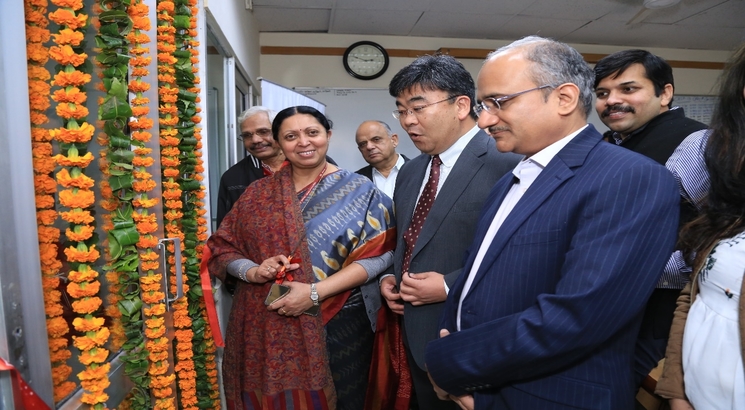 NEW DELHI, DECEMBER 21: To solve the challenges of power, space and compute requirements in the age of big data storage and analysis, IIT Delhi has launched the Green Data Centre. The machine, which has been hosted inside the Data Centre is based on Liquid Immersion Cooling system (LICS) developed by Fujitsu Japan and is first of its kind in Asia outside Japan.

The LICS machine at the supercomputing facility was launched by Dr. Renu Swarup, Secretary, Department of Biotechnology, Govt. of India and Prof V. Ramgopal Rao, Director, IIT Delhi. Along with LICS, a web portal on Bioactivity Information of Indian Medicinal Plants was also launched.

The web portal will be used to publish and discuss recent research on the effectiveness of the extracts of Tulsi, Turmeric, Neem and other Indian plants of medicinal value in a multitude of diseases and disorders. The main benefits of LICS machine as compared to conventional systems include 40% less Power consumption, 50% space saving, Installable anywhere (no need for a well-designed Data Centre), No Noise generation from the system because there are no moving parts and Easy to maintain.

Dr. Renu Swarup, Chief Guest on the occasion, was pleased to note that the new LIC technology would not only reduce the burden of maintaining a complex Data centre, but also the associated expensive air conditioning. She emphasized on the importance of sharing the resources with the student and scientific community across the country, which the SCFBio has been practising for more than a decade now.

Launching the web-portal on Informatics of Indian Medicinal Plants, she noted with appreciation the efforts of the Biocomputing group headed by Prof. Jayaram at SCFBio and wished that a collaborative model across the
various Institutes in the country would accelerate drug discovery from within the country.

Prof. V. Ramgopal Rao, Director, IIT Delhi, who presided over the function, called the LIC technology as a disruptive technology, which has the potential to revolutionize the HPC industry. While adverting to the collaboration between IIT Delhi and AIIMS, he appreciated the efforts of the SCFBio team for exploring various aspects of different medicinal plants in drug discovery.

Dr. Anil Srivastava, President, OHSL, USA, a Guest of Honour on the occasion, projected that India would take lead in the science and technology of drug discovery as it did in software industry three decades ago.