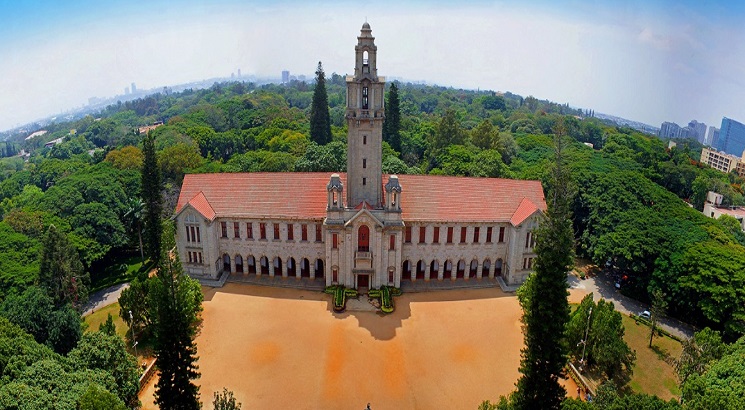 NEW DELHI, JULY 12: Many universities wanted to get ‘Institutions of Eminence’ (IoE) tag to overcome fee restrictions and courses that can be offered. A large number of public institutions suffer from ‘heavy’ governance structure and shortage of teachers and thus lost in the race to get the IoE tag. These were some of the observations were made by the Empowered Expert Committee (EEC) for selecting only six institutions as opposed to the previously proposed 20; 10 each from the private and public sector.

The EEC in its report has stated that it selected eight public institutions with a mix of technical institutions and universities, both central and state, as required under the IoE scheme but the government announced the names of only three as it wanted to keep the number of private and public institutions same.

Report of the Committee
The Ministry of Human Resource Development (MHRD) has announced the names of six shortlisted universities that include three public and three private institutions. Since the announcement was made, the EEC, as well as the University Grants Commission (UGC), have been hurled with criticism for being able to select only six institutions despite the country having such large number of high-quality institutions like the IIMs, IITs, TIFR, ICT, etc known all over the world.

Thus, to silence all the critics, the EEC has given a detailed review and recommendation of all the institutions that applied under the three categories, Public, Brownfield (existing private) and Greenfield (proposed private).

As per the report published by the UGC, a total of 114 applications were received, out of which 113 met all the eligibility condition. The one that did not fit the bill was ‘Maulana Azad Institute of Dental Sciences, Delhi’ as it did not submit the processing fee.

The UGC ‘Report of the Empowered Expert Committee’ states that the EEC carefully studied the proposals, verified the given information against national and international databases and other relevant data on their various achievements. It states, “The goal was singular: to assess the potential of an institution to be globally ranked among the top 500 in 10 years and eventually among the top 100.”

The Committee also studied carefully the criteria against which universities are ranked globally by reputed international ranking agencies and the expectations from IoE conferred institutions as detailed in the UGC guidelines.

Why over 100 applications were not selected

One of the major reason for application of many state institutions getting rejected was because there was a significant number of faculty positions vacant in these institutions and there was an embargo to fill vacant posts, as they were suffering from financial constraint. The universities are also facing other problem related to faculty shortage and as per the Report, “getting the right faculty was becoming difficult because the available pool was limited and all institutions vied for the same.”

As stated by the Chairman of the Committee, N Gopalaswami while talking to media that many of the universities that applied for the IoE status were focused more on teaching with less attention given to research activities. The report also states that many institutions were confining themselves to largely teaching, not having invested in research in any ‘significant way’.

Taking a strong view on many of the application submitted by the private institutions, the EEC without naming anyone observed that many seemed to be aspiring for IoE status ‘only to overcome restrictions in terms of fees that can be charged, courses that can be offered, etc’.

EEC noted that many institutions are suffering because of ‘heavy’ governance structure with apex bodies like Governing Boards, Senates, Syndicates, Academic Councils etc. having sizeable members, running to 100s in some cases. An urgent need, therefore, is to ‘reform’ governance structures so as to let them perform effectively. There is also a need to prioritize attention to the universities management and leadership.

Applications of some of the participating institutions were also not considered by the EEC as they violated the UGC guidelines. However, the EEC left the decision on considering their names to the MHRD and the UGC since the EEC was not fully aware of the type and extent of the alleged violations and their significance.

While going through the application process and during their presentations it was found that some of the institutions had not worked on ‘perception’ issues at all – whether in terms of student facilities, staff facilities, flexibility in curriculum design, courses etc. having given it a low priority.

As per the report, many institutions had a strong revenue model viz., dependence largely on student fees as income and so seemed to have expanded engineering education hugely. The expansion resulted in their lop-sided development and raising a question on the quality of students and teaching.

How some world-class public institutions lost the race

The EEC has selected eight public institutions and recognised the reputation gained by them in the area of academics and research. However, as per the report, “Many of these institutions have applied for recognition under the scheme most probably attracted by the financial dispensation and not because they stand a reasonable chance of achieving the stiff goal of being within 500 of world university rankings in 10 years.”

The report further added that the only consolation of this effort would be in these institutions becoming sensitised to the requirements for being highly acclaimed institutions. It states, “EEC would urge that their core competence is important to the country and should not be lost in their desire to attract funds under this scheme.”

The EEC received 11 applications under the category and out of that rejected 10, as they lacked vision, lacked financial back-up, with most of them bringing out more or less the same issues with very few of them ‘breaking new ground’.
The Report states, “Some appear to want IoE status only to leverage it to provide an advantage to their already functioning institutions. Some seem to be promoters and having started an
institution some years earlier have moved on to now proposing another Start-up.”

One of the applicants indicated that the land for the project identified by them is under prolonged litigation.

Highlighting why JIO institute was selected for the IoE status, the EEC Report states that of all proposals EEC found only one which appeared well thought out, well presented, and taking
an impressive multi-decade view of institution-building leveraging that promoter group’s known competencies in infrastructure building and the timely creation of new ventures.

It says, “EEC found only that proposal created confidence of the new institution meeting the rather stiff goal of being within the 500 of world rankings in a period of ten years and has therefore recommended it.”

As many as 29 institutions applied under the Brownfield category (existing institutions) of which eight are less than 10 years old, 14 are between 10 and 20 years in existence and seven are much older.

Committee found that most of those that have existed for less than 20 years have yet to find
their feet, with only two of them crossing a student enrolment of 3000.

The report states that for them to break into the top 500 in world rankings in the next 10 years seemed a tall order given their not-so-noteworthy record in the area of research activities.

While some perceived to be ‘good’ in popular view could not qualify for selection for the IoE status.

On the other hand, the report states that the older institutions had some solid achievements to show and were examined for their track record in terms of the level of student enrolment, transparency, research-bias, faculty levels and faculty output in terms of papers, citations etc. EEC could select only two institutions (BITS Pilani and Manipal Academy of Higher Education) that could convince the committee that they had the potential to be high achievers as required under IoE stipulations

The EEC has clarified that some of the top-rated institutions like the Indian Institute of Management – Ahmedabad, Kolkata; Institute of Chemical Technology, Mumbai; ICAR Delhi; TIFR Mumbai were not considered for the IoE status as the purpose of IoE is to create world-class universities that are measured against broader benchmarks and expected to produce diversified outcomes.

Recognising their achievements and unique contributions the EEC has recommend that the Government consider establishing a separate program to invest in them with a different set of defined goals and expectations. 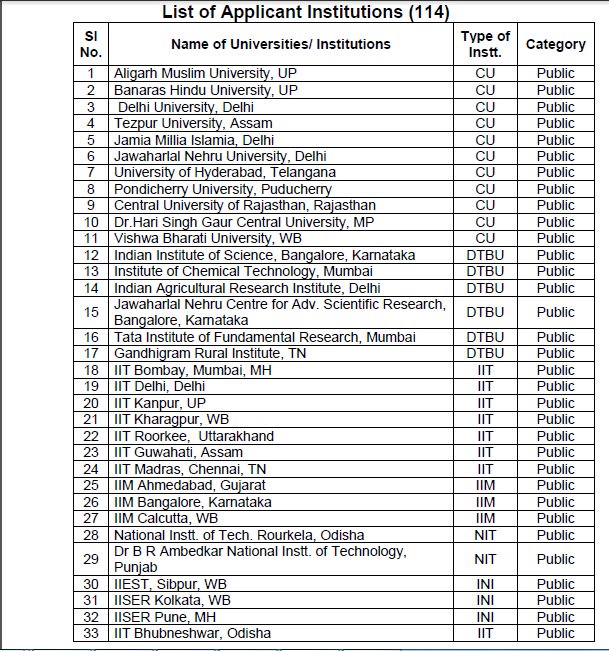 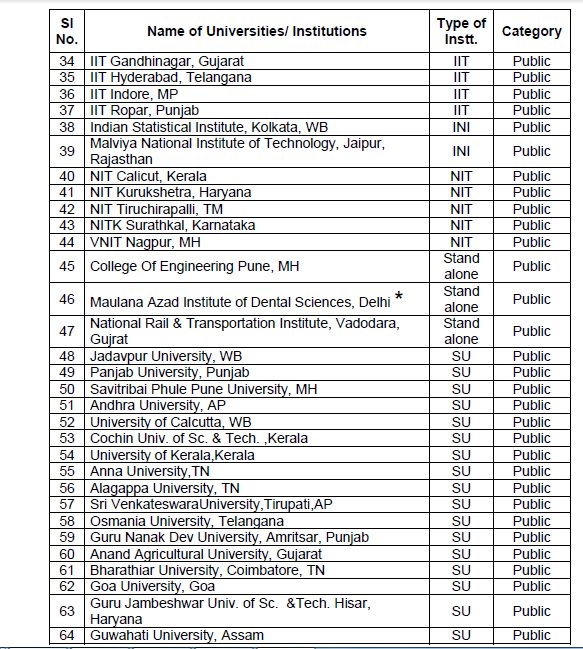 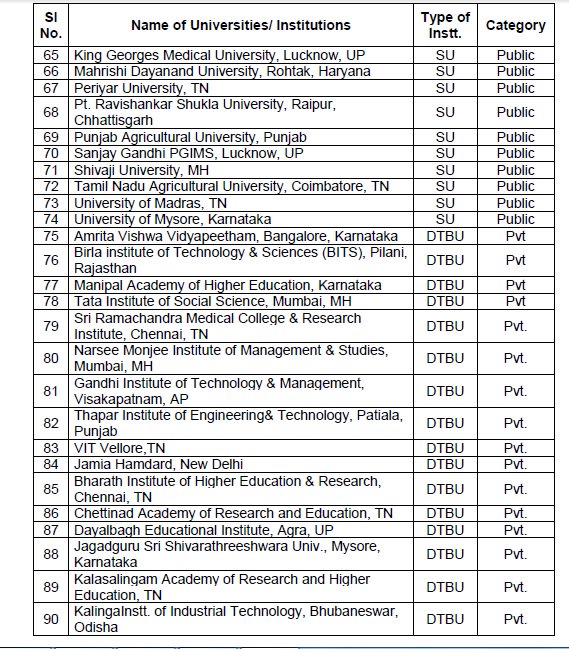 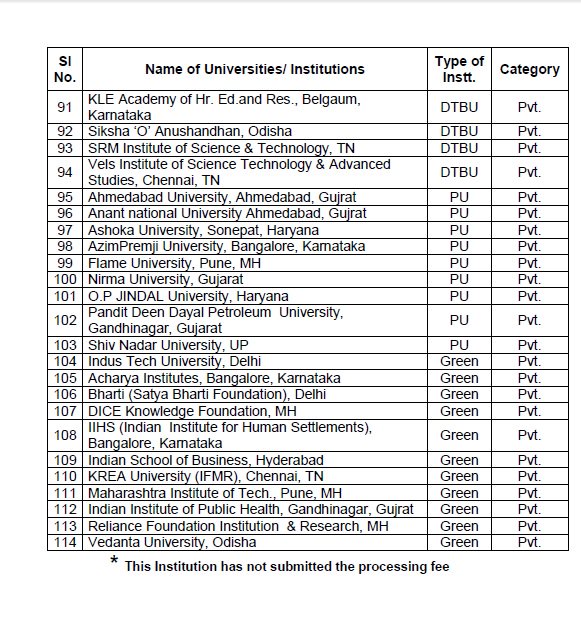