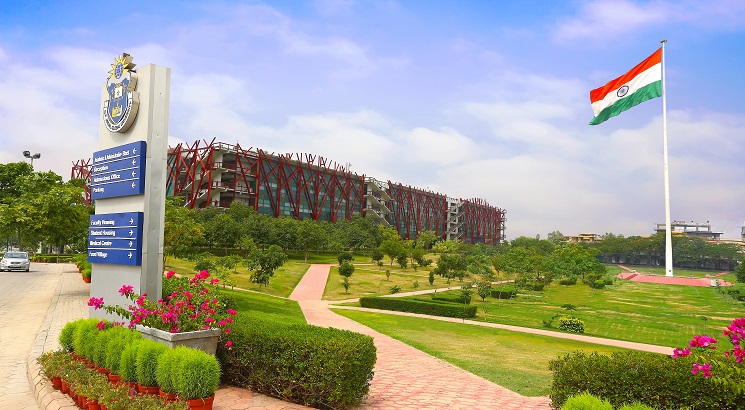 NEW DELHI, OCTOBER 24: OP. Jindal Global University (JGU) has broken into QS ASIA University Rankings 2019, an annual publication of university rankings that identifies the leading universities in the Asian continent. This is a huge achievement for the university, which in a short span of nine years, has been recognized as a world class educational institution. Having been ranked among the top 450 universities in Asia, it puts JGU in the top 3% of more than 13,000 universities in Asia.

In QS Asia University Rankings 2019, 505 institutions were ranked, out of which 92 are new entrants. The ranking process is quite stringent. QS uses eleven indicators (Academic Reputation, Employer Reputation, International Faculty, Faculty-Student Ratio, Staff with PhD, Citations per Paper, Papers per Faculty, International Research Network, International Faculty, International Students, Inbound Exchange Students, and Outbound Exchange Students) to compile the ranking, including a global survey of 83,877 academics and 42,862 recruiters to assess the reputation of universities. Over 13,000 universities in nearly 46 countries (and regions) in Asia are taken into consideration in the Asian Rankings.

On achieving this milestone, Founding Chancellor and benefactor of JGU, Mr. Naveen Jindal said, ‘This is a proud moment for India and for JGU. It is time for India to join ranks with world class universities and improve the academic environment for our students. It is a big stepping stone in JGU’s efforts as we relentlessly strive to build a world-class university. JGU was established less than a decade ago with the objective of promoting excellence in higher education. We are deeply humbled by this international recognition that will further motivate and inspire us to pursue the cause of institution building in India. To be recognized as the Youngest Indian university in a prestigious international ranking is a testament to the hard work and contribution of the faculty member, students and staff of JGU”.

Professor (Dr.) C. Raj Kumar, Founding Vice Chancellor of JGU said, “This is a fantastic recognition for JGU. It has always been our aspiration to achieve excellence, while benchmarking ourselves with the leading institutions around the world. This international recognition has come at the right time when JGU has also been conferred ‘autonomy’ by the UGC and Ministry of Human Resource Development. Breaking into QS Asia University Rankings in barely nine years since our founding is an unprecedented achievement for an institution in its quest for eminence. I would like to thank Mr. Naveen Jindal, our Founding Chancellor and benefactor, for the faith, trust and support that he has reposed in us. I hope our students and alumni are inspired by our Chancellor's philanthropy and commitment to higher education as they succeed in their professional pursuits and make a mark in their own careers and lives’”.

JGU’s performance in the QS Asia University Rankings is attributable to some of its core strengths, including (a) faculty-student ratio (rank is 191 in Asia on this parameter), (b) international faculty (rank 43 in Asia), (c) inbound exchange students (rank 168 in Asia) and (d) outbound exchange students (rank 81 in Asia). In faculty-student ratio, JGU's score of 7.9 is greater than the regional median value of 7.2 and very close to the Asia-wide mean score of 8.1. In the international faculty parameter, JGU's score of 17.9 (i.e. 18 international faculty members per 100 faculty members) is significantly higher than the Asia regional mean value of 8.9. Statistically, JGU sends more than 3 students on outbound exchange programmes per 100 students. On average, an Asian university sends 2 students for such programmes per 100 students. In these two parameters, JGU is one of the best-placed universities in the Asian region.