MBBS interns cry foul: It’s all work and no pay 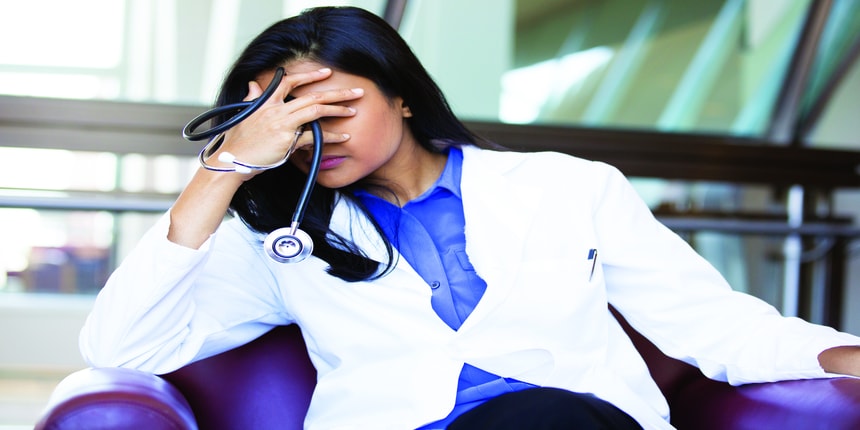 The month of June has been a tumultuous one for MBBS aspirants. The NEET result was followed by a high-voltage doctors’ protest condemning violence against them in Kolkata. Then came the token protest by resident doctors in Kerala’s government colleges against low stipends. The voices of the protesting MBBS interns of private medical colleges across India over a simmering issue got drowned in all this commotion.

With the poor doctor-to-patient ratio in the country, medical interns often function as cheap labour for medical colleges, sometimes forced to work continuously for over 24 hours. Not only are the working hours exhaustive, the stipends paid across states are also skewed. Assam and West Bengal offer stipends in the range of Rs. 20,000 to 21,000 per month while in Uttrakhand, it comes down to just Rs. 8,000.

Except for those interns in a few states in north India where the doctor-patient ratio is satisfactory, medical interns in the rest of the country can barely catch their breath. Those who wish to pursue their postgraduation often have to take a year off to prepare for their entrance exams, since studying during the internship is almost an unthinkable task. The skewed doctor-patient ratio of 0.62 doctors to 1000 people according to the National Health Profile 2018 and the lack of resident doctors in some colleges add to the workload of the interns.

Compared with their relatively well-off peers in the government colleges, private college students are paid a bare minimum. Unlike government colleges, private ones mostly do not follow the rules as well and the payments are often delayed by months. Private colleges often delay stipends citing lack of funds, administrative lapses and other excuses. “We used to get paid Rs. 5000 but even this was not paid on time. We protested for a bit as the payments were delayed for 3-4 months. But the college said they lacked the funds to pay on time and the protests gradually stopped as it was pointless,” said a former student of a medical college in Uttar Pradesh, who did not want to be named.

Protesting against such practices is unthinkable for the students as they are usually met with draconian measures. “If we protest the authorities will not sign our logbooks, or they can put a week of extra duty by giving petty reasons. That only further wastes our time. Due to such threats, not many people raise their voice and this practice continues to be,” says Aathul Anand, a medical intern of Amala Institute of Medical Sciences at Thrissur in Kerala.

This situation is not exclusive to any one state as students in private colleges across the country have been continuously facing similar problems. News of such unfair practices barely trickles outside the campuses as managements swiftly suppress any dissent. There are also cases where the students inadvertently sign on a bond during admission that they will take only a certain portion of the stipend and the rest will go to the trust that runs the institution.

During the last week of January 2019, a public notice was put up on the Medical Council of India (MCI) website that provided hope for these students. The notice addressed the lack of uniformity in the stipends of MBBS interns of private and government colleges of the same state. In the notice, MCI Board of Governors (BoGs) invited comments from the stakeholders on paying stipends to students pursuing a compulsory rotatory residential internship in private colleges on par with those paid to the interns of the state government medical institutions.

Private medical colleges students of Kerala remain sceptical about the efficacy of this move. This scepticism stems from their experience regarding a previous government order. In June 2015, the government of Kerala ordered an increase in stipends to Rs. 20,000 for all government, private and self-financed medical colleges of the state. This month marks the fourth year of that order and still, most private colleges in the state pay a quarter of that amount. “Yes, such an order was passed by the government, but it has no effect on the actual functioning of the colleges. Orders come and go but nothing changes,” says Aathul.

The private colleges remain adamant that they are under no obligation to pay the interns more than what they deem fit. “As far as interns are concerned, neither the university nor the government can dictate how much the stipend should be. The internship is part of the course, nobody can dictate us and say that (they should be paid a certain amount),” said Anil Kumar Vallil, Secretary, Kerala Private Medical College Management Association.

The issue though is a systemic one as even the state governments are unable to make the private colleges comply with their orders. Even before the governments of many states, including that of Kerala, ordered an increase in stipends, the issue was brought into the MCI’s notice which then commented that the Graduate Medical Education (GME) regulations have no clause regarding the stipends of MBBS interns. The recent change in approach by the MCI has brought the issue again to the limelight. But an answer to the vexing problem appears to be far off. The MCI, which finds itself entangled in many administrative problems, seems to lack the clarity and direction to find a solution to an issue that can only be solved through strict regulations.

With privately-run colleges continuing to flout government orders who will ensure that the medical interns get justice?