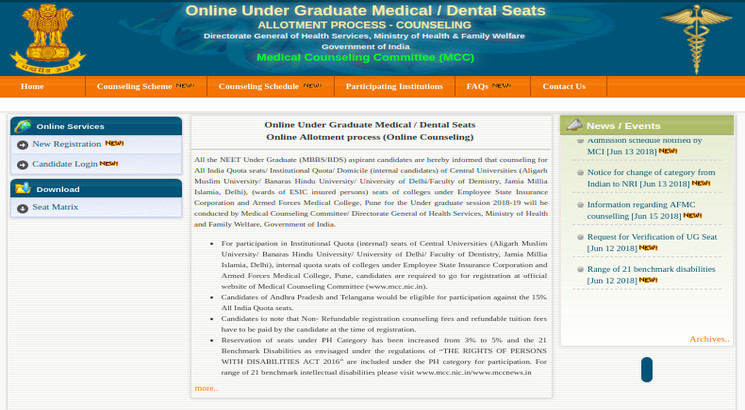 NEW DELHI, July 12: The Medical Counselling Committee (MCC) has stayed the counselling process for admissions to MBBS and BDS courses through NEET as per a notice issued on July 12, even as lakhs of candidates were awaiting the second round counselling result scheduled to be released on the same date.

According to the MCC notice, the result of the second counselling round, as well as the entire online counselling process will be “kept in abeyance till further orders”, in order to comply with the directions passed by the Madras High Court on July 10.

The notice released by the MCC can be seen below - 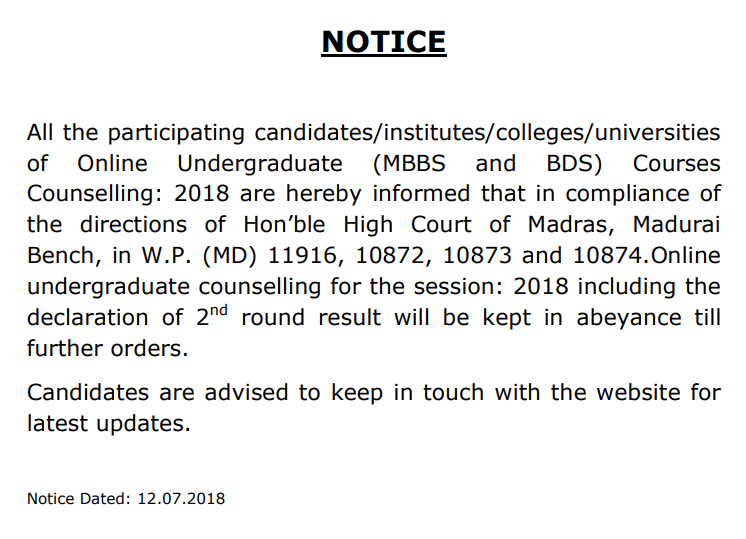 On July 10, the Madurai Bench of the Madras High Court passed its final judgment with regard to a petition filed by CPM MP TK Rangarajan demanding that students be compensated for 49 questions in the National Eligibility cum Entrance Test (NEET) question paper which were incorrectly translated in Tamil language. The court had ordered that each of the students who appeared for NEET in Tamil be awarded 196 grace marks. It also directed that the counselling process be suspended till the Central Board of Secondary Education (CBSE), regulatory body of NEET 2018, releases a fresh merit list within two weeks. The court’s decision stands to benefit 24,720 students who appeared for the exam in Tamil language.

Given that the first round of counselling for admissions to All India Quota seats as well as seats offered under State Quota across different states has already been concluded with students taking admissions to various allotted colleges, the introduction of a new merit list with the addition of these 24,720 students is quite likely to throw the entire counselling process into jeopardy. Many students could lose their seats which will open the possibility of the entire NEET counselling process being thrown open to further litigation.

As per media reports, the CBSE is now planning to approach the Supreme Court to appeal against the Madras HC order. According to the Board, all students opting for regional languages were given papers in their preferred language and English. And as per the NEET bulletin, the English version of the paper will be treated as final in case of any ambiguity in translation. It is understood that the CBSE will approach the Supreme Court on these grounds.

In a related development, TK Rangarajan has also filed a caveat on July 11 with the Supreme Court in order to pre-empt the CBSE’s expected appeal and to ensure that any stay on the Madras HC order is not granted without hearing him. As per Rangarajan, the Government should create more seats in government and private medical colleges and if the affected students end up securing seats only in the private colleges, then the difference in fees as compared to government colleges should be covered by the Government.