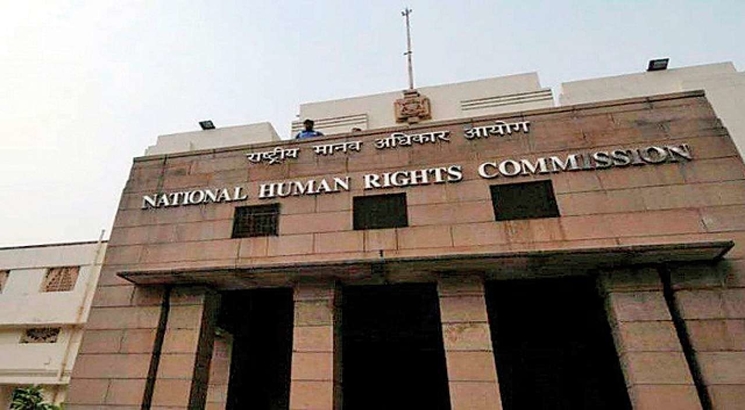 NEW DELHI, May 10: The National Human Rights Commission (NHRC) has issued notices to the CBSE and the Government of Tamil Nadu asking for detailed reports on the alleged hardships faced by students with regard to exam centre allotment and security checks for NEET 2018.

In the first notice, dated May 7, 2018, and addressed to the Chairperson, Central Board of Secondary Education (CBSE) and the Chief Secretary, Government of Tamil Nadu, the NHRC states that it has taken “suo moto cognizance of a media report alleging a lot of hardships to the young students, who had to travel across their State” to appear for the exam which was conducted on May 6, 2018.

As reported earlier by Careers360, numerous candidates from Tamil Nadu were allocated test centres outside the state, in distant locations in Kerala and Rajasthan. A Writ Petition around this issue had been filed by affected candidates before the Madras High Court, which had directed the CBSE to reallot such candidates centres within Tamil Nadu itself. However, the CBSE was able to successfully obtain a stay order from the Supreme Court on the Madras HC oder, meaning that the candidates were required to appear for the exam in the centres allotted to them.

The issue further spun out of control and created a huge furore on the NEET exam day, when the father of a Tamil Nadu candidate who had accompanied his ward to the allotted centre in Ernakulam, Kerala, passed away while the candidate was appearing for the exam.

Taking note of this incident, the NHRC in its notice has proclaimed it as a “serious issue of violation of human rights”. Accusing the CBSE and the TN Government of adding to the tremendous pressure already faced by aspirants appearing for the exam, the NHRC notice states that “the State Government and the CBSE authorities have failed to provide examination centres to the aspirants within the State, resulting in hardships not only to the students but also their parents”.

Accordingly, the CBSE and the TN Government have been asked to submit a detailed report on why students, allegedly 3685 in total as per media reports, were required to travel across states to appear for the exam and why steps were not taken to create additional centres within Tamil Nadu itself. The Commission has also asked to “know as to what steps are being taken by both the authorities to ensure that such incidents do not recur in future”.

Check the press release of the NHRC in this regard below - 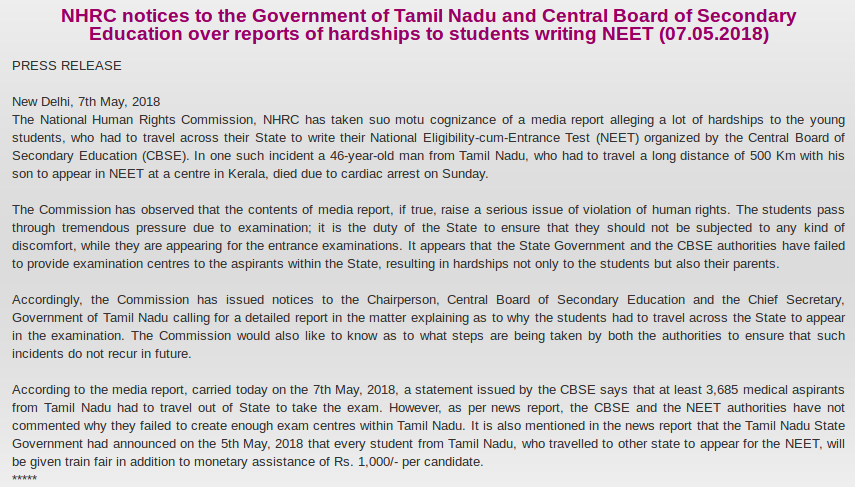 In the second notice issued by the NHRC on May 8, 2018, and addressed to the same authorities, the Commission has highlighted media reports “regarding the alleged harassment and convenience caused to the aspirants in the name of the security checks”, a controversy which had plagued NEET last year as well.

As per media reports, candidates appearing for NEET across different centres were required to cut their sleeves, remove buttons, shoes, jewellery and even inner wear before being allowed to appear for the exam. Infact, in an eerie reminder of an incident reported from Kannur last year, a NEET aspirant from Palakkad in Kerala has even lodged an FIR against an invigilator who she claimed was repeatedly staring at her chest after she had been forced to remove her brassiere before entering the exam hall.

While noting that it was necessary to conduct appropriate security checks before conducting an exam so as to prevent cheating, the Commission clarified that putting candidates through such a “vexatious” process was “tantamount to harassment” and amounted to “violation of the right to dignity of the aspirants”.

Asking authorities to rethink their approach towards security checks in order to ensure that they are conducted in “a dignified manner so that wastage of time and inconvenience during manual frisking of the aspirants could be reduced”, the Board has given a time period of six weeks to the CBSE and the TN Government to submit its detailed report on the matter.

Check the press release of the NHRC in this regard below - 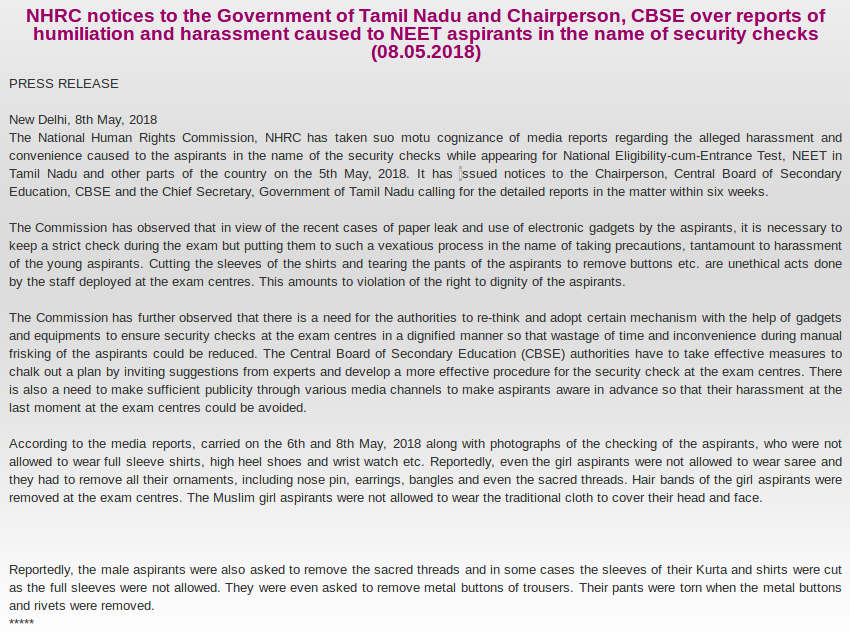 After last year’s fiasco, in which the Principal of a school in Kannur was suspended after invigilators at the centre asked female candidates to remove their innerwear before entering the exam hall, the CBSE had taken numerous precautions this year to ensure all candidates were informed about the dress code and took appropriate measures to adhere to the same.

As per an official notice of the CBSE, dated May 7, 2018, “candidates were informed about the rules and regulations, conduct in examination, etc. every day by sending SMS to individual candidate. Accordingly, nearly 1.33 crore SMS were sent to the candidates. Further, their parents were also communicated through various modes requesting them to ensure that their ward is following the instructions issued by CBSE”.

In addition to this, the CBSE also organized a radio programme on May 5, a day before NEET was to be held, in which it issued last-minute instructions and exam day guidelines for the benefit of all candidates.

With regard to TN candidates being allotted exam centres in other states, the CBSE refuted the highly publiched story of one candidate having to travel all the way to Udaipur to appear for the exam by stating that “his online application records show that the child had himself opted for Udaipur as an option for exam centre”. Similarly, the Board also said that the news published with regard to TN candidates being deprived of the chance to appear for the exam in Tamil was also incorrect. As per the CBSE, “all candidates who had opted Tamil as medium were given centres within Tamil Nadu, and were given question papers in Tamil”.