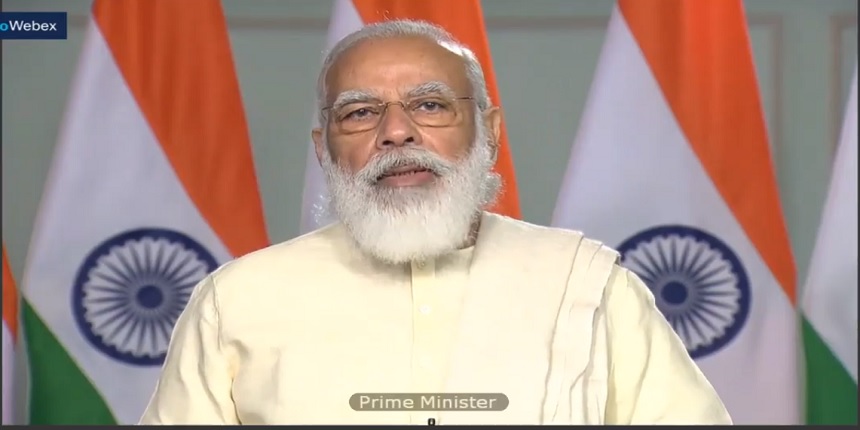 NEW DELHI: Prime Minister Narendra Modi on Wednesday urged the youth to develop the qualities of self-confidence and introspection, saying this was the goal of the New Education Police announced earlier this year by his government.

"The aim of the new National Education Policy is that the youth of the country gets to know itself,” he said at the centennial celebrations of University of Lucknow. In his address through video conference, the prime minister also took an indirect dig at the previous governments, finding fault with the functioning for years of the rail coach factory in Rae Bareli.

He did not, however, name Congress or its president Sonia Gandhi, who represents Rae Bareli in Parliament. “Self-confidence comes when there is freedom to take one's own decision, and when there is flexibility. A mind and body which are in chains can never be productive,” he said.

The prime minister urged the teachers and the students at the university to thoroughly discuss and argue over the NEP, and also work on its speedy implementation. “By the time the country completes 75 years of Independence, the NEP will become a part of our education policy in letter and spirit," he said. Modi talked about the Modern Rail Coach Factory near Rae Bareli, while arguing about achieving one’s potential.

"For a long time the problem has been that we have not utilised our potential (saamarth) to the fullest. The Rail Coach Factory in Rae Bareli is an example of this,” he said. “Years ago, investments were made there, resources engaged, machines installed, and big announcements made that rail coaches will be made there. But for years, only denting and painting were done there,” he claimed. "The factory which had the capability to build rail coaches did not work to its full capacity," he said.

"After 2014, we changed our thought process, and the result was this that within a few months, the first rail coach rolled out from here. And today, every year hundreds of coaches are rolling out." "The example of how potential is used in the right manner is next to you, and today the world is seeing this. UP will feel proud of the fact that after sometime, if there is any discussion on the biggest rail coach factory in the world, then it will be of Rae Bareli rail coach factory," he said.