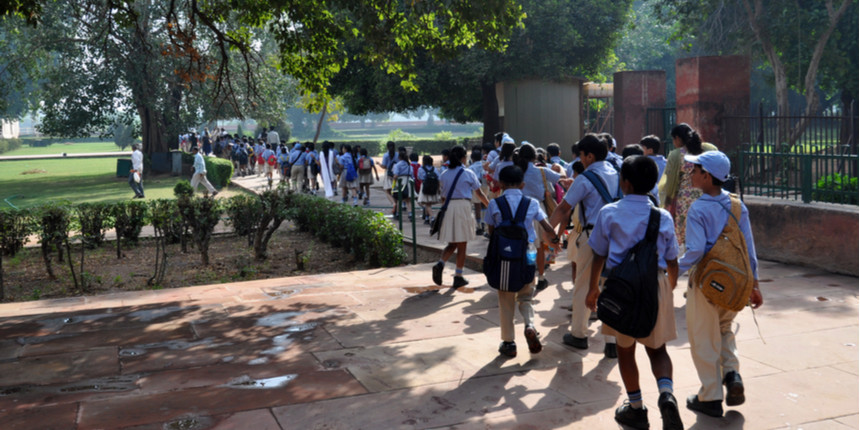 NOIDA: Students from Class 9 to 12 returned to classes on Monday as schools reopened in Uttar Pradesh's Gautam Buddh Nagar after a seven-month hiatus due to COVID-19 outbreak, officials said.

There are 153 schools in the district -- 53 of them government and government-aided while remaining self-financed -- that reopened in adherence to COVID-19 norms like social distancing, face covers and sanitisation of hands, District Education Officer Neeraj Kumar Pandey said. “Government and aided schools had an average attendance of 39 per cent on the first day, while it was 11 per cent in private schools.

The teachers' attendance was 100 per cent,” Pandey told PTI. “The atmosphere was positive and students looked happy,” he said, adding that the low turnout, especially in private schools, was due to initial challenges of confidence building between schools and parents.

The education officer expected the attendance to go up to 70 per cent in all schools in a week's time and around 100 per cent after Dussehra holidays. “The government's decision to reopen the schools is a courageous step. There is no alternative to classroom teachings. Online classes are fine, but not absolute substitution for schools and classes,” Pandey said.

On issues faced during the first day, he said cameras installed in four or five schools were not working properly and these institutions have been asked to get the problem rectified soon.

“All schools are equipped with cameras and can be monitored real time. The same way we monitor classes during examinations. Today, we visited some schools to assess the situation and for many we reviewed the situation by real-time monitoring through cameras,” he added.

Another issue, he said, was miscommunication between schools and students because of which all students of Class 9, 10, 11 and 12 reached their school in the morning while the instruction was to have 50 per cent students in the morning shift and the remaining in the afternoon shift.

“We wanted Classes 9 and 10 to be present in the morning and 11 and 12 in the afternoon shift. At some places, all students reached the schools in the morning. But this appears to be a miscommunication error which will be worked out over the next couple of days,” Pandey said. However, a major advantage of the low turnout was a near-ideal student-teacher ratio in classrooms, the officer said. “There were 20 to 24 students in a classroom instead of the usual 40 or so. Student-teacher ratio is where government schools would earlier come secondary to private institutes and coaching centres.

So in a way, the low turnout provided teachers and students also a more convenient atmosphere for classes,” he said. Pandey said all COVID-19 related guidelines were followed and morning assemblies have been cancelled in schools to keep away from gatherings that can be avoided.