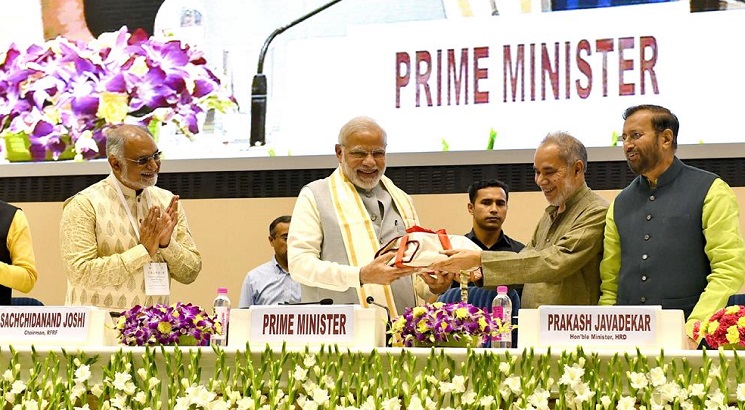 NEW DELHI, OCTOBER 1: The Prime Minister has the heads of higher education institutions to set goals for themselves and try to fulfil them within their tenure at the office. He has also asked the universities to develop new methods of teaching and also asked them to strengthen the teaching system by using new technology.

Prime Minister Narendra Modi speaking at the Conference on Academic Leadership on Education for Resurgence said, “the tenure of most people is four to five years. While working during these years, you should also set some goals for yourself.” He said that from the very first day the Vice Chancellors, Directors need to think that when they finish their term, what they are leaving behind as the legacy?

The University Grants Commission (UGC) has recently granted graded autonomy to 60 universities and colleges that include academic and financial autonomy. Prime Minister talking about the development said, “It is an unprecedented experiment and this decision has to be taken forward to us and the institute. Recently, the UGC has also released the Graded Economic Regulation, which gave autonomy to universities and colleges. Its purpose is to improve the standard of education and it will also help in making them the best. Due to this regulation, 60 higher education institutions and universities have got grade autonomy in the country.”

Recalling the ancient Indian texts, the Vedas, the Prime Minister said that we cannot imagine our society, our country, and even our lives, without knowledge. He said that our ancient universities such as Taxila, Nalanda and Vikramshila, gave importance to innovation, besides knowledge.

He urged students to link their classroom learnings to the aspirations of the country. He also mentioned Atal Tinkering Labs which have been set up to encourage children to innovate. He mentioned the RISE – Revitalization of Infrastructure and Systems in Education -programme for improving education infrastructure. He mentioned the steps taken for higher education.

The Prime Minister emphasized the importance of preparing good teachers for society. He also said that scholars and students can take responsibility for spreading digital literacy and generating greater awareness of government programmes that can improve the ease of living.

The Prime Minister said that the youth has given “Brand India” a global identity. He mentioned schemes such as Start Up India, Stand Up India and Skill India, which are aimed at nurturing young talent.