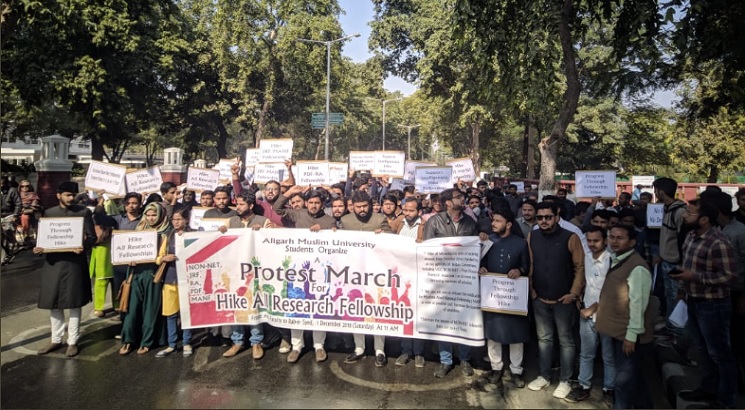 NEW DELHI, DECEMBER 20: Research scholars from leading higher education institutions like the Indian Institute of Science (IISc) Bangalore, Indian Institutes of Technology (IITs) and All Indian Institute of Medical Sciences (AIIMS) will converge in front of the Union Ministry of Human Resource Development (MHRD) demanding an increase in fellowship grant, on 21st December.

The Research scholars for past few months have been demanding an increase in the grant on yearly basis, instead of once in four years. The last revision of the grant was done in 2014 and the next revision was set to happen in 2018, which is yet to happen. The researchers from IITs and central universities like the Delhi University, Aligarh Muslim University(AMU) have pledged their support for the protest.

One of the Research Scholars joining the protest, Sanjay Kumar said, “Research Fellowship should increase every year, something like dearness allowance of the central government employees. The researchers want that there should be at least 10-15% increase in fellowship grant every year. The last time the fellowship grant increased in 2014, and as per the norm, it should have increased again in 2018, which has not happened. Govt is launching one scheme after the other but what about the existing scholars.”

Recently, the Government announced the Pradhan Mantri Research Fellowship (PMRF), under which each fellow is entitled fellowship of Rs 75,000. The researchers working in IITs, IISc are calling this move irrational, as according to them it unfair that one person in the same lab gets Rs 75,000 and the other gets Rs 25,000.

One one side there is a good sign for the research with more number of students enrolling for PhD programmes but on the other side, there is a lack of encouragement for existing scholars.

In order to promote innovative and cognitive thinking and improve the quality of PhD Programmes, the government has launched schemes like IMPRINT (Impacting Research Innovation and Technology), IMPRESS (Impactful Policy Research in Social Science), SPARC (Scheme for Promotion of Academic and Research Collaboration) has been launched and STARS (Scheme for Transformational and Advanced Research in Fundamental Sciences) is under active consideration.