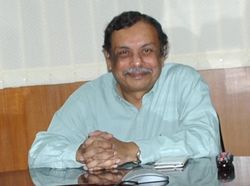 Prof Santanu Chaudhary is also coordinating technology projects which involves nearly 11 institutes under Indian Digital Heritage Programme of DST. The programme is basically into the developing the digital techniques for the digital restoration and preservation of heritage sites at Hampi.

Prof Chaudhary has an area of interest in image processing, machine learning and embedded systems. With such interest, he has developed a scheme for cloud based image super resolution scheme. This is a new technique of video compression based on parametric compression. Currently, he is working on various other projects which are ‘Development of robust document analysis and recognition system for printed indian scripts (OCR)’, ‘Vision based activity monitoring for surveillance applications (NRB)’, ‘Design of an embedded processor for smart camera systems’ and others.

A B.Tech graduate in Electronics and Electrical Engineering from IIT Kharagpur, Prof Chaudhary has as many as 259 research papers published in various national and international journals and has 12 patents filed under his name. He is currently working as a faculty member in IIT Delhi and will be the third Director of IIT Jodhpur. Prof Santanu Chaudhary has also completed his PhD degree in the area of Computer Science and Engineering from IIT Kharagpur in 1989.