Students to study in 2022 under new curriculum as envisaged by NEP 2020:PM 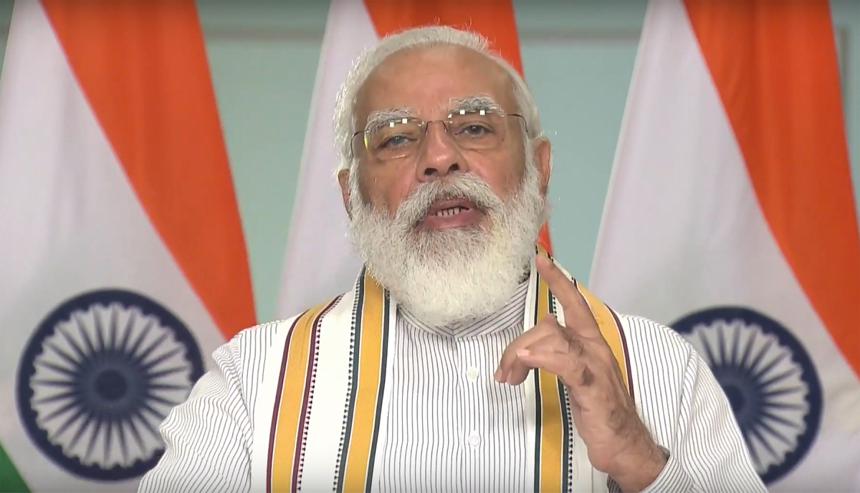 NEW DELHI: Prime Minister Narendra Modi said on Friday that students will study under a new curriculum drawn from the the National Education Policy when the country celebrates its 75th year of Independence in 2022, and asserted that the curriculum will be "forward-looking, future ready and scientific".

Addressing a conclave on "School Education in 21st Century" under the NEP 2020, Modi also emphasised on the need for children to study in their mother tongue or local language at least till Class 5. He, however, said that the NEP places no bar on learning any language and that children can study English or any international language which they find useful.

No one has any objection to this, he added, while noting that Indian languages should be promoted. His comments come amid criticism of the NEP-2020 by some opposition-ruled states. A few opposition parties have accused the ruling BJP of working to promote Hindi, a charge rejected by it.

In his speech, the prime minister lamented that the world changed in the last three decades but our education policy remained the same. In the current system, marksheet has become "pressure sheet" for students and "prestige sheet" for families, the prime minister said, adding that the new policy aims to remove this pressure. Modi said the NEP will give a new direction to the country in the 21st century, sowing the seeds for a new era.

"The job is not finished yet. It (NEP) has to be implemented in an equally effective manner, and we have to do it together," he said, noting that a nation-wide consultation process is going on over the policy. People have many questions about the NEP, and they are legitimate, he said, noting that over 15 lakh suggestions have been received on MyGov portal from teachers within a week of the Ministry of Education seeking views on the policy's implementation.

"When the country marks its 75th years of Independence, then every student should be studying under guidelines formulated by the NEP. This is our collective responsibility," he said, referring to teachers, parents, states and NGOs. The NEP places a lot of thrust on children's education, he said, adding that the young generation is vital to the nation's development. It focuses on learning based on fun, activities and discovery, and seeks to develop mathematical thinking and scientific temperament, Modi said.

The NEP has been prepared in way that the syllabus can be reduced and focus should be shifted to fundamentals, he said. A national curriculum framework will be developed with a view to make learning a fun-based complete experience, he said.

"It has been decided that when we complete our 75 years of Independence in 2022, students should be stepping towards a new future with this new curriculum. This curriculum will be forward-looking, future ready and scientific," he said. It will have new skills to promote critical thinking, creativity, communication and curiosity, Modi said.

He pitched for linking education to the surroundings students live in and said engage, explore, experience, express and excel should be the mantra of the new age learning. Students should have 21st century skills which are critical thinking, creativity, collaboration, curiosity and communication, he said.

Advocating that children should be learning in their mother tongue in initial years, he said it should be kept in mind that language is the medium for education. Education is not all about language, he added Young students should not be spending their energy more on understanding a language than their subject, he said, adding that this is why mother tongue is the medium of study in early education in most countries.

One of the major reasons behind the drop-out ratio is that students do not have the freedom of choosing their own subject but NEP will give the choice, he said. Now, students will not have to be limited to the watertight boundaries of commerce, science, and humanities and will choose any subjects they want to, he said.

The prime minister also urged teaches to emphasise that people follow coronavirus guidelines of using face cover and maintaining social distancing. The NEP approved by the Union Cabinet in July replaces the 34-year-old National Policy on Education framed in 1986 and is aimed at paving the way for transformational reforms in school and higher education systems to make India a global knowledge superpower.

Among the reforms proposed in the policy for school education are universalisation of Early Childhood Care and Education (ECCE) for children up to the age 8; replacing 10+2 structure of school curricula by a 5+3+3+4 curricular structure; integrating curriculum to 21st-century skills, and mathematical thinking and scientific temper.