UP CM urged schools and colleges to organise debates on 'Sahibzada Diwas' so that it can become the "real" Children's Day. 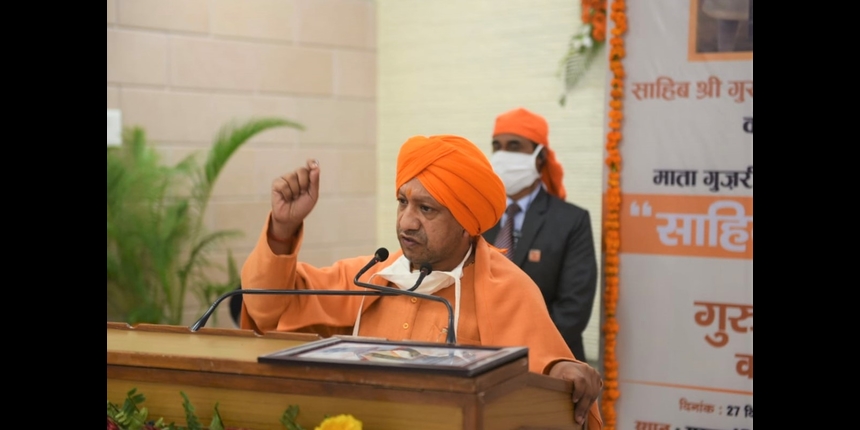 LUCKNOW: The history of Sikh gurus will be included in the school curriculum in Uttar Pradesh, Chief Minister Yogi Adityanath announced on Sunday.

Adityanath said this at a Gurbani Kirtan held at his residence on the occasion of 'Sahibzada Diwas', which marks the martyrdom of four 'sahibzada' (sons) of 10th Sikh Guru Gobind Singh and his mother Mata Gujri.

On December 27, he said, schools and colleges should organise debates and the day should be celebrated in a way that people can take inspiration from it and 'Sahibzada Diwas' can become the "real" Children's Day.

Adityanath, who sported a saffron turban, said, "The history of Sikh gurus will be a part of the syllabus. Apart from this, December 27 will be celebrated every year as Sahibzada Diwas in all schools. Today is the day to pay gratitude to the sons of the Guru and mother who martyred their lives for the motherland, country and religion." Deputy Chief Ministers Keshav Prasad Maurya and Dinesh Sharma, and Cabinet ministers attended the programme.

"No society can move ahead if it forgets history. The Sikh society is known for its hard work. The Sikh gurus sacrificed their lives to defend the Hindu religion.

The country will always remember this," Adityanath said. The chief minister, his ministerial colleagues and seers from the Sikh community also accepted the ''langar prasad'' on the occasion, the UP government said in a statement.