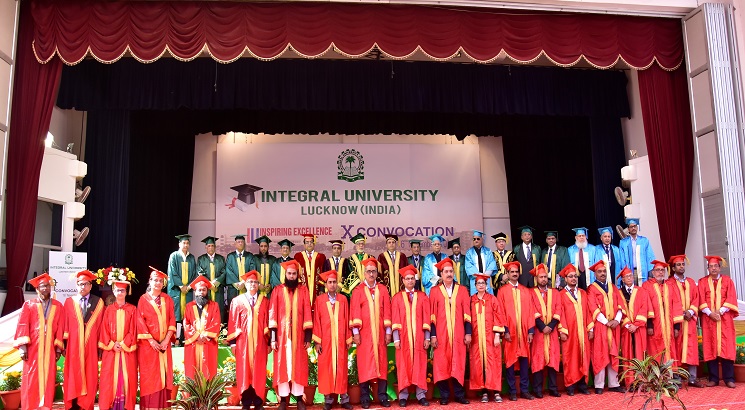 NEW DELHI, NOVEMBER 20: The 10th Integral Convocation, the annual highlight of the University, and important milestone in the educational journey both for students as well as for the University concluded in the University Lawns with full house of students and faculty in their colored customary robes.

The ceremony began with the University Tarana which set the tone of this X Convocation on a pleasant November morning.

Prof. Aqil Ahmad, acting Vice Chancellor expressed his regards to the presiding guests for elevating the aura of the occasion. Prof. Ahmad mentioned the various achievements of the University in recent years and reinforced that Integral has always strived to be a centre of excellence. “Integral University has advanced a lot in academic research and development activities. It has achieved a vertical growth over a short period of time,” the Vice chancellor said.

Kumar Keshav, Managing Director, Lucknow Metro Rail Corporation, who included the role of ethics in the life of a student. He said, “One must always live with the utmost integrity”. He concluded wishing all the outgoing students and teachers all the success in life and to always be confident. He thanked Prof. S. W. Akhtar for his support in Lucknow Metro LMRC project.

The X Convocation was graced by the Chief Guest Dr. Trilochan Mohapatra, Secretary, Department of Agriculture & Farmers Welfare, Govt. of India and Director General & Secretary of Indian Council of Agricultural Research (ICAR). He appreciated how the current and previous Vice-Chancellors and Office Bearers leading from the front took this university to newer heights. He appreciated the role of Integral University in the field of Agriculture Science and talked about the importance of agriculture and development of farmers for the growth of this university, in particular, and India, in general. “Integrated agriculture should be integral to Integral University,” he said.

The Registrar distributed the degrees to the recipients. Total number of degrees given were 1973, in which there were 69 PhDs, 489 PGs, 1367 UGs and 48 Diplomas in Pharmacy. 45 Gold and Silver medal, each, were given to toppers.

Mohsin Raza, Cabinet Minister, the guest of honour, in his encouraging speech asked the students to brighten the university’s name. “By the combined efforts of Engineers, Lawyers, Doctors, present here at Integral University, our nation can truly progress”, he said. He talked about religious unity and the importance of peace of mind in education.