Abhishek Meena emerged as one of the RBSE 12th Science toppers with 97.60% 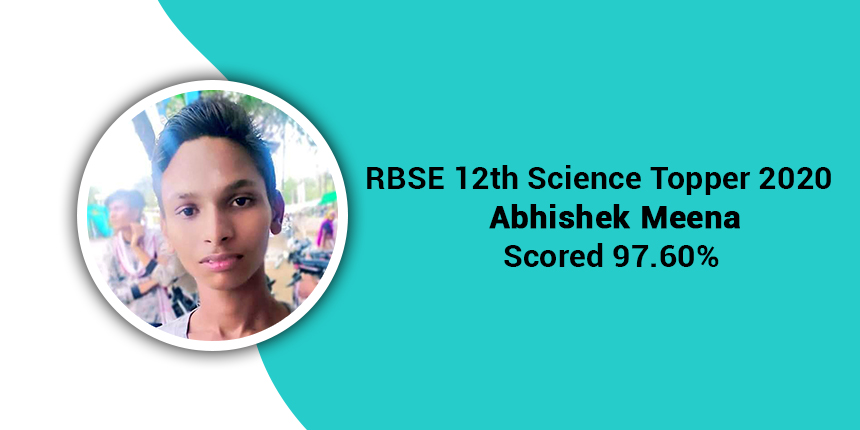 By Saumya Srivastava and Dinesh Goyal

NEW DELHI: Board of Secondary Education, Rajasthan announced the RBSE Class 12 Science result on July 8, 2020. The result was declared in the online mode on the official website. Among several toppers of RBSE 12th Science, Abhishek Meena was not given due attention in regard to his achievement. He scored a total of 488 marks with 97.60 per cent in RBSE 12th exams. In order to share his inspiring story and preparation strategy, Careers360 took an interview of Abhishek Meena.

When we asked him about his first reaction after checking the result, he said: “I was shocked, I was not expecting this much.”

He is from Chatarpura village which is situated in Tonk district. Abhishek completed his schooling from the Government Senior Secondary School, Kotinatma. Interestingly, he moved to Kotinatma just to complete his senior secondary education as his sr. secondary school was 40 km away from his hometown.

On conversing about his favourite subject, Abhishek said that he is very fond of Physics and scored 99 marks in this subject. Apart from this, he scored 97 marks in Mathematics and Chemistry, 99 in English and 96 in Hindi.

On being asked about his preparation strategy, he said: “I studied consistently and used to practice derivations and note down the topics after reading.”

He is currently preparing for the JEE Main, BHU PET, Jamia Millia Islamia and CUCET entrance examination. In addition to this, Abhishek Meena said that he wants to become an IAS officer.

When asked if he wants to give any tip to the aspiring RBSE 12th students, he replied: “I would advise them to study daily and cover the topics on a day to day basis, do not leave it for tomorrow. They should also give equal attention to Hindi and English language subjects, this will help them in scoring better.”