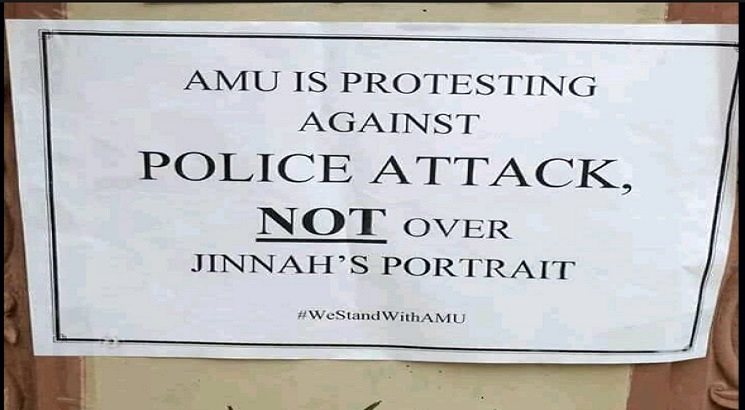 NEW DELHI, MAY 9: Aligarh Muslim University (AMU) Vice Chancellor Prof Tariq Mansoor condemning the use of "excessive force" on protesting students has demanded judicial probe in the recent incidents of violence in the university campus over Jinnah’s portrait.

The AMU VC has appealed to students to maintain peace and focus on final exams scheduled to begin from May 12. Prof Mansoor in his appeal has cautioned the agitating students against falling into the trap people trying to malign the image of the reputed institution.

Last week violence erupted at the AMU over Muhammad Ali Jinnah's portrait on the campus, over a dozen people were injured in the violence of which maximum were students. Students have alleged that the local police also lobbed teargas shells to disperse AMU students who were demanding the arrest of protesters who forcefully barged into the campus shouting slogans.

The VC has said that students agitation was not related to Jinnah portrait, they were protesting against people who came inside the campus to disturb the peace. He said that he has spoken to the chief secretary for a judicial inquiry into the incident.

Mansoor after visiting Jawaharlal Nehru Medical College where injured students are admitted said, “I share the pain of our students.” He said that under no circumstances, students should let their studies suffer especially at a time when exams are round the corner. I appeal to all students to maintain calm and focus on studies wholeheartedly and to do well in their careers.

“I have already denounced the excessive use of force on our students which resulted in injuries to the present and former office bearers of AMU Students Union and other students,” VC said.

Many of the AMU alumni have also condemned the biased attitude of the local administration over “lathicharge” on the peaceful protest by students against the goons, they have also clarified that Jinnah is nowhere part of their ideology. Mohammed Ataullah Khan, President, AMUOBA Kolkata has said that Jinnah can be a piece of history but nowhere a part of our ideology. We never had or will support him. All central universities, including AMU, come under UGC and the President of India is the final authority on whether or not the portrait should hang there.