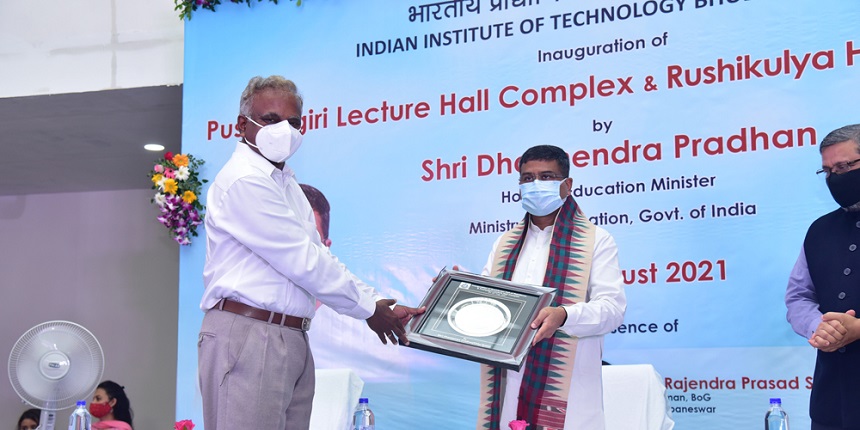 BHUBANESWAR: Union Education Minister Dharmendra Pradhan on Friday inaugurated an academic complex at IIT Bhubaneswar and expressed hope that the added infrastructure will enable the students of the premier institute to strive for greater excellence. The global fourth Industrial Revolution has necessitated the creation of new models of business and development for the world and IIT Bhubaneswar must create such models, help generate jobs and solve modern-day problems, the Union minister said.

Pradhan was speaking after inaugurating the Pushpagiri Lecture Hall Complex and the Rushikulya Hall of Residence at the institute here. The present lecture hall complex has three buildings, while the Rushikulya hall of residence is an 800‐single-seated hostel, the institute said in a release. The first of the buildings is now ready for operation and a mini-complex comprising 10 flipped classrooms is under construction, the release said. In the future, another three buildings are likely to be added to the lecture hall complex that has a circular formation.

Pradhan stressed the need for greater collaboration between institutions to address the local and environmental issues in a disaster-prone state like Odisha which will become a role model for the entire nation. “With a focus on world-class research and innovation, our IITs have indeed become the symbol of the progress of India and success in higher education. "Our IITs are among the world’s top universities and are contributing to global technological needs,” the Union minister said.

On this occasion, a memorandum of understanding was signed between Skill Development Institute, Bhubaneswar, and IIT, Bhubaneswar for sharing of expertise and enhancing skill development activities for under-employed, unemployed, and underprivileged youth IIT Bhubaneswar Director Prof Raja Kumar said the Union government had so far sanctioned Rs 1,260 crore for building the infrastructure in two phases. The present complex -- which has facilities for lecture halls having seating capacities of 60, 120, and 240 -- can be used for conventional classes and also serve as e‐classrooms, Kumar said. The flipped classroom complex is one of the foremost in the country and it can be used for conventional lectures, group or individual tasks comprising design, analysis, and assignment, Kumar said.

The lecture hall complex has been named taking inspiration from the historical Pushpagiri Vihara, an important Buddhist site which was a major centre of learning. The residential hall is named after the Rushikulya river, well-known for the nesting of Olive Ridley turtles near its mouth.

Youth will be torchbearers of self-reliant India: Dharmendra Pradhan at IIT Bhubaneswar

IIT Bhubaneswar completes semester exams for 2020-21 amid the pandemic

Your IIT Bhubaneswar brochure has been successfully mailed to your registered email id “”.