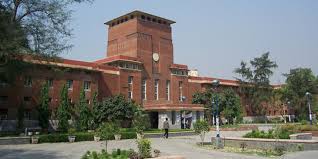 NEW DELHI: The academic and executive council members of the Delhi University on Thursday wrote to the vice-chancellor asking him to scrap the online open-book exams.

Their letter to DU Vice-Chancellor Yogesh Tyagi comes in the wake of Union HRD Minister Ramesh Pokhriyal ''Nishank'' asking the University Grants Commission (UGC) to revisit the guidelines issued earlier for intermediate and terminal semester examination, and the academic calendar.

Twenty-five academic and executive council members in the letter said, "The Union Minister of HRD is learned to have advised the UGC to revisit its earlier guidelines regarding the conduct of examinations and academic calendar".

"It has also been reported that the UGC Expert Committee has recommended the cancellation of examinations for terminal semester/year students. It appears that both the HRD minister and the UGC Committee have appreciated the objections raised by teachers and students against the university's decision to conduct online open-book exams," it said.

Meanwhile, students of DU''s School of Open Learning (SOL) alleged that its website crashed when they opened it to download assignment questions. They alleged "mismanagement" on the part of SOL and said students are bound to fail exams in such a scenario.