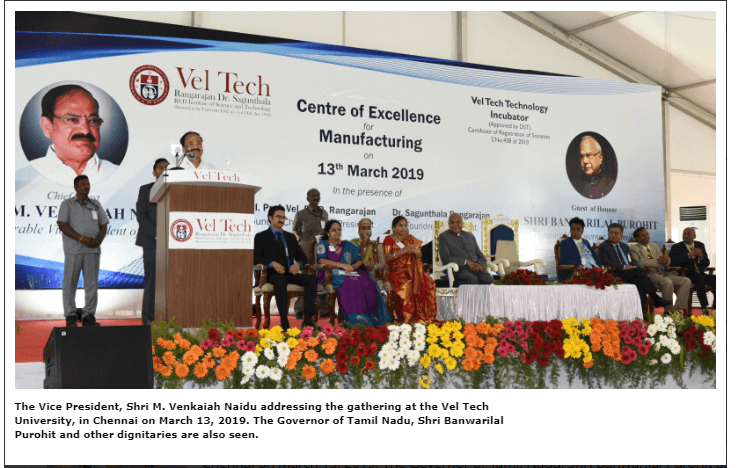 NEW DELHI, MARCH 14: Addressing Vel Tech University in Chennai on March 13, the Vice President of India, M. Venkaiah Naidu stressed that the education system needed to be reoriented to ensure greater linkage between academia-industry. This he said would contribute to make students employable and was possible only with the collective efforts of the government, academia and the industry. The Governor of Tamil Nadu, Shri Banwarilal Purohit and other dignitaries also graced the occasion.

Earlier while visiting the Nidhi-CoE Lab at the university (the only Centre of Excellence in the private sector among the six such CoEs), the Vice President observed that business incubation is a globally recognized tool for economic development and job creation. He further mentioned that innovation, incubation and start-ups are the buzz words in today’s world and vital for any country to play an increasing role in the global economy. He felt that it is the right time for India to seize the opportunity and promote the culture of innovation and technology-based entrepreneurship.

Lauding the institute on its research-intensive teaching and learning practices, he added that innovation and entrepreneurship are the twin engines that will propel India to a new era of economic prosperity and social inclusion.

He also mentioned that Department of Science and Technology (DST) has been supporting technology-based startups through its flagship programme of “Technology Business Incubator”.

He felt that to stay ahead, a meaningful role in the 4th Industrial Revolution had to be played by India and that this was possible because of the tremendous demographic dividend in the country waiting to be realised. He stated that with India having one of the youngest populations, it was only right that this huge human capital needed to be converted into a force multiplier for the Indian economy by technologically empowering the youth.

To do so, some of the steps to be incorporated are, learning by facilitation, innovation of curricula, infrastructure, pedagogy, teaching and examination methodology and technology tools in addition to step up funds for R & D.

He also appreciated the efforts of Prof. Col. Vel R Rangarajan and Dr. Sagunthala Rangarajan, the founders of Vel Tech for providing quality education through a multitude of academic programmes.

Vel Tech TBI has motivated 103 young innovators to start their own companies by using the facilities established at Vel Tech TBI. Veltech is the first and only member of CDIO (Conceiving-Designing-Implementing-Operating) initiative from India in the QS top ranked universities.