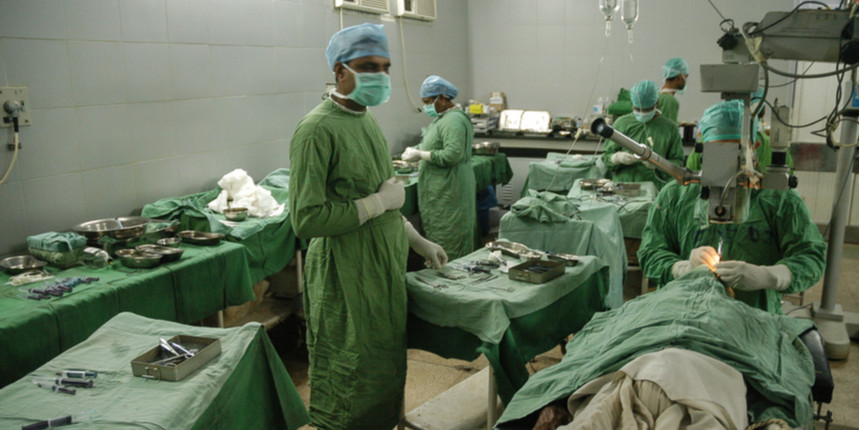 NEW DELHI: The Central Government’s policy think-tank NITI Aayog has drafted a model agreement between private entities and government-run district hospitals to establish and maintain medical colleges. The finance minister, Nirmala Sitharaman, also mentioned such a plan in her speech announcing the Union budget for 2020-21.

Made public for comment in January, the draft “Concession Agreement – Guiding Principles” has disturbed healthcare and education policy experts alike. They argue that it offers no solution to fundamental problems such as shortage of staff in primary healthcare or unequal distribution of doctors in the country. Instead, if implemented, it will likely further commercialise both healthcare and medical education.

They also question the basic premise of this proposal – NITI Aayog’s twin claims that there is an overall shortage of doctors and that this model has been successfully implemented in Karnataka and Gujarat.

The purpose of the proposal is to link new or existing private medical colleges with the government district hospitals under a public-private partnership, or PPP, agreement. The minimum annual student intake in these medical colleges at the MBBS level should be 150. Also, the suggested model can be implemented in a district hospital which has at least 750 beds or the number of beds prescribed by the Medical Council of India (MCI). If it doesn’t, the hospital can be upgraded by the private party.

At least 300 beds and another 20 percent of the remaining ones "shall be for free patients". The rest will be “market beds”. In case of emergency, patients can go to the regulated beds on first-come-first-serve basis. The PPP model will provide undergraduate and postgraduate medical education. On reserving seats for the marginalised, it just says the college will “follow the principles of admission for all categor[ies] of students” – the Scheduled Castes, Tribes, Other Backward Classes (SC, ST, OBC), the economically-backward upper-castes, or EWS, and Non-Resident Indians. Fees will be set “in accordance with applicable laws”.

Experts and non-profit organisations in public health and medical education criticised the terms pointing out that the vast majority of the patients who seek care in district hospitals at present are the rural and urban poor. Plus, the demand for free beds in a district hospital is far above 750.

“If half of these beds are turned over as market beds and charged for, the effective availability of the beds for the poor is also halved,” said Abhay Sukhla, national co-convener of Jan Swasthya Abhiyan, or People’s Health Campaign. He also said that segregation of patients and their differential care is almost inevitable. “In specialised care, the staff will mostly be for the paying patients,” he said. “And so, the quality of treatment for those in the free beds will decline.”

The activists’ opposition to the policy is not just theoretical. Doctor and public health researcher, Sylvia Karpagam cited the example of a hospital in Raichur in Karnataka – a state the NITI Aayog’s document claims has successfully implemented the scheme. “The beds which are reserved for the poor patients are never used for the poor,” she said. “Neither did it [the project] generate the income which it was supposed to generate.”

While in a fully public set-up, the responsibilities and flow of accountability is clear, in a PPP it is a grey area. Plus, the model agreement is vague on the composition of the hospital-college combine’s governing body.

Karpagam added that in the Karnataka hospital, there was no system of redressing grievances and even the staff had a lot of issues as they had been on contract, were not paid for long, and were suddenly asked to leave without any notice. “There is a lot of labour-law violation when these private companies take over,” she said.

In an earlier conversation with Careers360 on the draft, public health expert and academic Rama Baru had said: "The National Medical Commission document allows the government to control fees for 50 percent of the seats. So, if these medical colleges do not make a viable business, the district hospitals will be made to subsidise them. It is from the hospital that the private colleges will recover the cost."

The draft also says, “India has a dire shortage of qualified doctors." This, apparently, is a misleading diagnosis.

Shukla argued that there is an overabundance of doctors in large cities and scarcity in rural, tribal and peripheral areas. “We are not short of doctors, there is maldistribution of doctors,” he said. “The highly inequitable and skewed distribution of doctors is the primary problem.” And it isn’t likely to be solved by any medical college set up following the NITI Aayog agreement. No doctor who graduates from these medical colleges will serve the rural population unless at the time of admission they are made to commit to it for five-10 years after graduation, he said. NITI Aayog’s draft agreement does not mention rural service.

A blow for the poor

“The worst sufferers will be those who cannot afford to buy healthcare,” said Arundati Muralidharan, manager-policy, at WaterAid India. Muralidharan pointed out that among the poor and those living in “vulnerable settings” – where sanitation services and health of residents are compromised – “the district hospital is the first port of call”. The PPP plan is likely to reduce their access. “There must be mechanisms by which the poorest and most marginalised are able to receive the essential services they need,” she said. Avinash Kumar, India head of international non-profit, Amnesty International, expressed the same concerns. “This country has very little public health infrastructure,” he said. “The logic of the [NITI Aayog] system is that we add private healthcare to the public. But the argument that the private system is more efficient falls flat before whatever evidence we have.” He added: “We are making healthcare far more unaffordable and distant”. He further said: “If we look at healthcare as a basic right of people, and this is associated with right to life and to equality, the way government policy-makers are going ahead is problematic.”

Kumar emphasised the need for trained manpower and paramedical staff in sufficient numbers in the rural and peripheral areas. “Trained manpower is not there in primary healthcare which can actually take care of 70 percent of the health burden,” he said. “Basic reforms are not being addressed and now you are saying you will outsource public healthcare infrastructure to the private healthcare sector which is far more expensive. This only adds to the misery of a very bad situation”.

The activists pointed out that the Centre ought to follow the examples set by countries with proven track records in healthcare, rather than the questionable success of Karnataka and Gujarat.

“The only way is to make public healthcare infrastructure strong like in the Nordic countries or England where you make sure that nobody is denied the basic right to healthcare,” Kumar said. “Here only 20 percent of the cost of healthcare is being borne by the government and 80 percent by poor people”.

Shukla agreed. “It has been seen that in developed countries, they avoid placing medical education in the private sector altogether,” he said. “There should be no further private medical colleges and the government should invest in public medical colleges taking the district hospitals as a base.”

Karpagam added: “In Raichur, tertiary hospitals were handed over to a private chain. A state government review showed that the model had failed.”

Jan Swasthya Abhiyan’s statement says the proposal violates the Central Government’s own health policy of 2017 which “promises free drugs and diagnostics and free care for all in the public hospitals and prioritise[s] building up of public hospitals and engagements with not-for-profits”.

“To be a ‘free patient’ one would need a specific authorization certificate from a district health authority, thus levying extra burden to the already ailing patient”, says the statement. This bureaucratic hurdle may deter the public from seeking healthcare when they need it most.

Shukla wondered if the Ministry of Health itself knew about this proposal or was involved in its formulation. “The health ministry, to the best of my understanding, does not seem to have endorsed this proposal and if district hospitals are involved, it is the health ministry which should have been centrally involved,” said Shukla. “The district hospitals are public resources run by the state health department and run by the Union ministry. Where is the public health system in this? They don't seem to be a part of this,” says Shukla. The draft model agreement does not name its authors.

The last date for providing comments on the draft model concession agreement has been extended to February 10, 2020. A consultation workshop will follow on February 25.