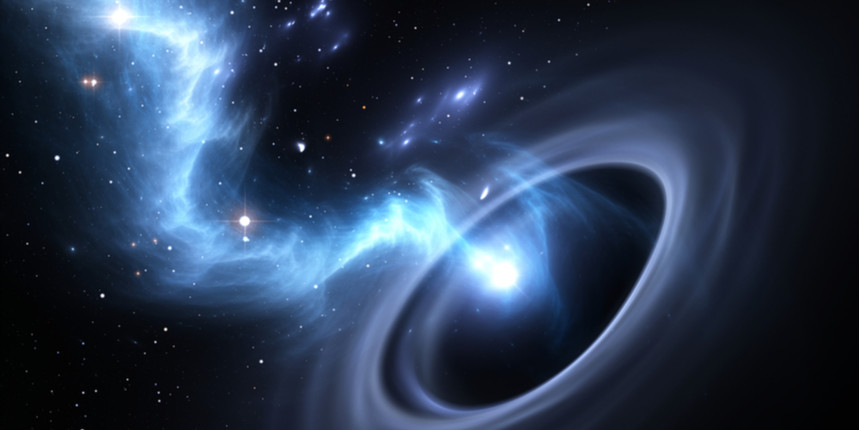 NEW DELHI: Researchers at the Indian Institute of Astrophysics (IIA) have discovered a model which can deduce the mass of massive black holes and their spin. The model is based on a study which examines the gravitational force at the centre of the black holes and its impact on stars.

The study was T. Mageshwaran's, PhD thesis work at Indian Institute of Astrophysics under the supervision of A. Mangalam, professor at the institute. They developed a detailed semi-analytic model. It studies the dynamics of accumulation and outflow of Tidal Disruption Events (TDEs).

TDEs or Tidal Disruption Events can be described as a phenomenon in which stars are disrupted when the black hole's tidal gravity exceeds the star's self-gravity.

Mageshwaran is now associated with Tata Institute of Fundamental Research as a post-doctoral student.

“There is a collection of stars usually around the galaxies and one of these stars, if it is dynamically favourable, goes close to the black hole. It goes so close that the tidal gravity of the black hole dominates over the stars own gravity and this makes the star disintegrate,” Arun Mangalam told Careers360.

Most black holes lead isolated lives and it is impossible to study their nature. Astronomers study them by watching for their effects on nearby stars and gases.

Supermassive black holes govern the movement of stars orbiting within their gravitational potential.

The event can be observed in different electromagnetic bands. “They are actually observed from satellites, ground-based optical and radio telescopes etc. So astronomers see a sort of a trend of the light curve, that is the intensity of light and how it changes,” he added.

“There is a lot of radiation emitted in the process and if it is above a certain limit, it is called the Eddington limit, the material gets evaporated. The model takes into account all these details.”

Cosmology and black hole astrophysics are related. They help us understand the universe.

Tidal disruption events happen once in a million years for a single galaxy.

“There are 100 billion galaxies. Statistically, there are a lot of events and so many are detected,” said Mangalam.

Their research was published in the New Astronomy (2020).