The Week In Education: Several states to keep schools shut till October 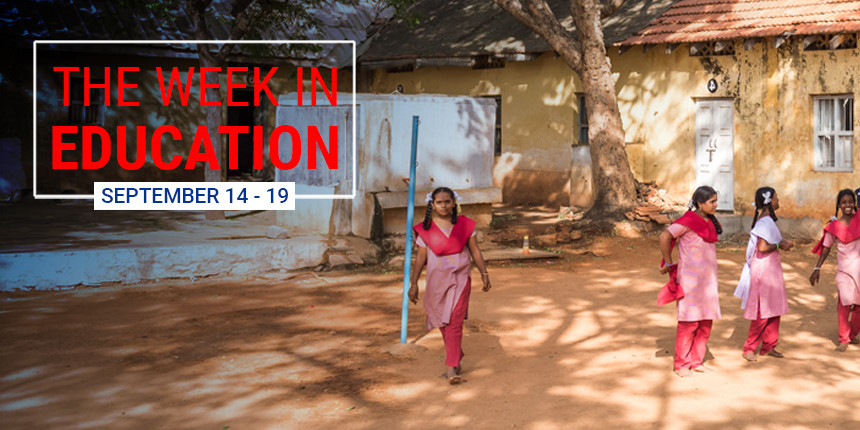 NEW DELHI: Although the Centre has okayed it, there will still be no ‘Unlock-4’ for schools in many states. Uttarakhand, Delhi and Goa have already decided against reopening on September 21. Some others are yet to announce their plans.

Two major exams are behind us, the JEE Main and NEET 2020 and the result for the second is awaited. However, university exams have now begun, at Delhi University, IGNOU, Assam and elsewhere. And new entrance tests have been announced for the end of September and the early October.

There were the most significant developments in education over the week.

The Delhi Government, on Friday, announced that all the schools in Delhi will remain closed till October 5. The government said that the duration for the centrally-organized online classes for Classes 9 to 12 will be extended.

Goa Chief Minister Pramod Sawant on Thursday ruled out reopening of schools in the state before October 2.The government will review the coronavirus situation on October 2 after consulting the stakeholders before deciding to open the schools, he said.

Huge misappropriation of funds has been found in the audit of six Delhi University colleges who are not paying salaries to their staff citing lack of funds, Deputy Chief Minister Manish Sisodia alleged on Wednesday.

The principals of the 12 Delhi Government-funded Delhi University colleges have criticised that allegation and demanded that the Delhi chief minister, Arvind Kejriwal, intervene in the matter related to pending grant of colleges. They also demanded that the deputy chief minister, Manish Sisodia refrain from alleging corruption on the part of the colleges’ administration.

The Delhi University, meanwhile, has approved the composition of a Departmental Academic Integrity Panel to look into issues concerning plagiarism and academic integrity. Plus, the second round of Open Book Exams have begun.

Maharashtra Higher and Technical Education Minister Uday Samant on Thursday announced three days' extension for students to submit applications for the last year or semester examinations of Mumbai University, which has the highest enrollment of students in the state. Samant also clarified that there will be no difference between degrees that will be granted to students during the COVID-19 period and certificates obtained earlier. He emphasized that the government will take action against private companies or industries if they look down upon degrees acquired during the pandemic period.

A new university will be set up at Villupuram by bifurcating the state-run Vellore based Thiruvalluvar varsity, Chief Minister K Palaniswami announced in the Assembly on Wednesday.

Union Minister Dharmendra Pradhan on Tuesday sought the Centre's intervention to safeguard the interests of students and faculty of universities in Odisha saying amendment of law through an ordinance by the state government has stripped the academic institutions of their autonomy.

Jadavpur University formally decided to provide android handsets and data pack to students, not having such facilities, as new semester classes are slated to begin this month, an official said on Sunday. The University has also decided to hold final semester examination in arts and science stream in contactless digital mode from October 1 to 10.

A plea was filed in the Supreme Court challenging the Jharkhand High Court order which had dismissed a petition seeking quashing of a notice issued by the National Law School of India University (NLSIU), Bengaluru, regarding holding a separate entrance examination, NLAT-2020. The Supreme Court Thursday said it would pronounce its order on September 21 on the petition.

Jamia Millia Islamia on Wednesday said it will hold written tests for admission to undergraduate and postgraduate courses. The university was considering having merit-based admissions this year owing to the COVID-19 pandemic but in the Executive Council (EC) meeting held on Tuesday, it decided to hold entrance tests for admission.

The IK Gujral Punjab Technical University has announced that final-year or final-semester students with backlog will be evaluated when the “normalcy is restored and the environment is conducive”. The notice has irked the students who worry that this delay will result in their losing a year.

Two important bills were passed in the monsoon session of the parliament. The Homoeopathy Bill and the National Commission for Indian System of Medicine Bill. Another one granting five Indian Institute of Information Technology (IIITs) the status of ‘Institutions of National Importance’ is pending in Rajya Sabha. Once passed, these five will be empowered to award degrees.

Replying to queries during the session, the ministry said that it has allocated Rs 818 crore for the promotion of online learning and Rs 267 crore for online teacher training to mitigate the effect of the COVID-19 pandemic on school education. The ministry also said that food security allowances were provided to 9.5 crore children during the pandemic.

Dravida Munnetra Kazhagam (DMK) MP P Wilson raised the issue of challenges faced by students due to the NEET examination and claimed that several aspirants in Tamil Nadu have committed suicide as the competitive test was not deferred.

The Union Cabinet approved the establishment of a new All India Institute of Medical Sciences (AIIMS) in Darbhanga.This will be the second AIIMS to come up in one of the most densely populated districts of north Bihar, Darbhanga. Bihar already has one AIIMS in Patna.