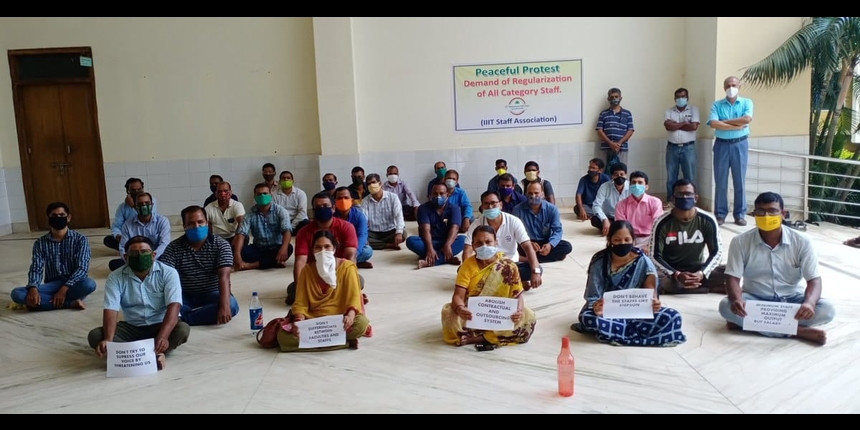 NEW DELHI: The students of the International Institute of Information and Technology Bhubaneswar, a public institution in Odisha, have boycotted online classes for a week to protest against being charged for campus utilities they have not been using. They cannot pay the full fee in the midst of the coronavirus pandemic, they said.

To mark their protest, the second-year and third-year students of the institute have boycotted the online classes for a week. “Before the semester began in July, the management justified the fee stating that they do not want to fire or cut down the salary of staff members,” a final year student told Careers360 on phone and on condition of anonymity. “We got to know that the non-teaching staff is protesting. Why should we pay if they are not even paying the staff ?” the student asked.

As per the official notice, the last date to pay the fee has been extended till September 15. The fee structure includes payment for the hostel, mess charges, library and IT services. A detailed questionnaire was sent to IIIT Bhubaneswar’s director but he did not respond. If he does, this copy will be updated to include his comments.

The students alleged that the administration has not been “transparent” in dealing with the fee issue. On August 17, the students were called back to vacate the hostel rooms by September 10 to avoid being charged for it.

“We have been asked to take our belongings and vacate the hostel rooms but it is nearly impossible for many students like me to travel all the way to the campus during this pandemic, a third-year student told Careers360. “My father’s income has been affected by pandemic lockdown. There are 10 people dependent on his income. We are trying to minimise excessive expenditure and paying for utilities we are not using is unreasonable at this time,” the student added.

Considering students’ requests, in August, the financial committee of the institute had halved the fee but the fee for on-campus utilities was retained.

“Since then students from all batches have tried to communicate our problems but the management does not respond to our queries,” the student further said.

On September 3, the All India Council for Technical Education released a notification advising institutes to charge maintenance charges for mess and transport only. The notification further said that the students should not be charged for services “not-accessible” to students during the semester.

Moreover, students complain that the institute’s administration has been apathetic to students' concerns and practice favouritism in resolving academic issues.

A student, in an email to Careers360, alleged that the director of the institute asked students to take a one-year drop if they are unable to pay the fee. Apart from that, issues pertaining to a “hectic” schedule were also handled in a biased manner, the student wrote.

Yes. I am a mediocre student, I have failed subjects, bunked classes, and missed assignments. So is the college entitled to say that I am not worthy of taking suggestions from? These are the words of honourable faculty IIIT BBSR@Naveen_Odisha @SMEOdisha @PMOIndia @DrRPNishank pic.twitter.com/seHhyjoUzM

“We had complained that our class schedule is very hectic and it should be revised to suit our needs. The dean of academic affairs conducted a meeting and invited only the toppers to discuss the class schedule,” the final year student said. The “mediocre students” were not allowed to attend the meeting, the student added.