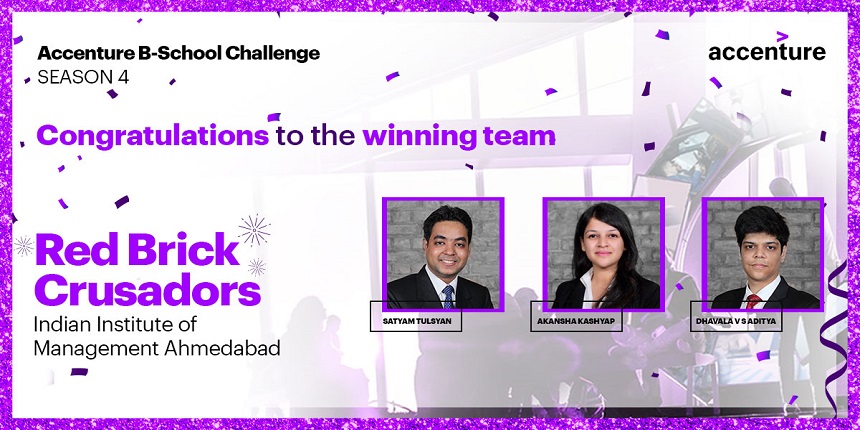 NEW DELHI: Accenture has announced top winners of the fourth edition of the annual Accenture B-School Challenge. The first prize was awarded to the team from IIM (Indian Institute of Management) Ahmedabad.

The fourth edition of the annual Accenture B-School Challenge focused on the theme of ‘Reimagining the Future of Business,’ was aimed at identifying innovative ideas, and top talent for the digital economy. The participating teams presented case studies across diverse industries such as banking, retail, consumer goods, natural resources, energy, automotive and life sciences.

More than 5000 students from ten premier business schools in India participated in the month-long competition. The top 10 finalists were evaluated by a jury comprising industry leaders from Indian businesses and multinational corporations as well as senior leaders from Accenture. The winners of Accenture B-School Challenge 2020 were selected based on innovative ideas to reimagine businesses for the digital era.

The first prize was awarded to the team from IIM Ahmedabad. The first runner up team was from Indian Institute of Management Calcutta followed by second runner up team from Indian Institute of Management Lucknow. The top ten teams from each campus qualifying for the grand finale received a pre-placement interview opportunity with Accenture besides the winners who received other exciting prizes.

Over 1700 teams participated in the online quiz, of which 50 teams were selected per campus for the second round. Twenty teams made it to the third round, where further ten teams presented virtually to the Accenture Leadership and eventually one team per campus was chosen in the final round.