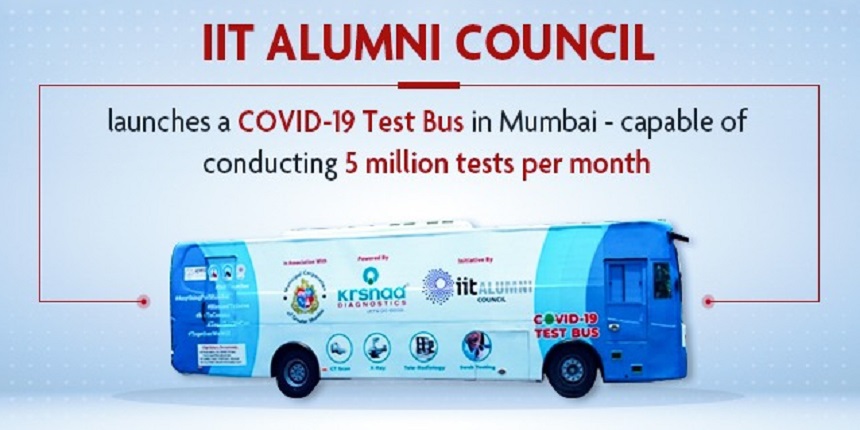 NEW DELHI: On May 1, 2020, the Indian Institutes of Technology (IIT) alumni council launched a COVID-19 test bus to carry out affordable and rapid testing in the dense urban areas of the city.

The bus is an initiative by the C19 task force of IIT alumni council, health department of Municipal Corporation of Greater Mumbai (MCGM), and Krsnaa diagnostics. The bus, according to the official statement, will “ isolate doctors and facilitate large-scale testing during the monsoon.”

“The IIT alumni council has taken a pro-active approach to supporting the Government’s efforts in fighting the COVID-19 challenge. We have acted swiftly and set-up the IIT C19 task force to channelize the energies of the global IIT alumni for this fight,” the official statement said.

First Vehicle of its kind

The COVID-19 test bus is based on “indigenous technology” and the “first vehicle of its kind in the world with onboard genetic testing, Artificial Intelligence (AI) based technology and contactless sample collection,” according to the official statement.

“We first carry out a digital chest X-ray which is immediately transmitted via internet to doctors who use AI-powered technology to determine the probability of the person being COVID positive using a high, medium or low scale,” Muffazal Lakadawla, chief medical officer of the National Sports Club, said while explaining the standard operating procedures of the bus.

Over 10 tests per hour

The bus, according to the official statement, is capable of conducting 10 to 15 tests per hour. The bus is designed keeping in view the heavy rains of Mumbai. There are 384 square feet of lab space on the bus.

The developers said that the bus will “facilitate an 80 percent reduction in costs and 100 times increase in testing capacity.”

The statement also said that the upgraded M2 version of the bus will have a wireless robotic tele-operated ultrasound lung probe and a nanopore gene sequencer.