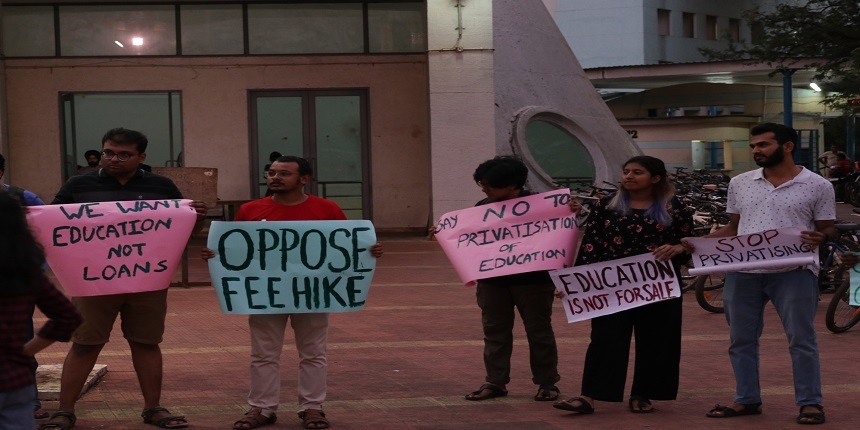 NEW DELHI: Postgraduate students of Indian Institutes of Technology (IITs) have intensified their protest against the nearly tenfold hike in the fee for their programme. Students of IIT Banaras Hindu University (BHU) called for a protest on the occasion of the visit of Minister of Human Resource Development (HRD), Ramesh Pokhriyal 'Nishank' on November 8, for the annual convocation. IIT Bombay students also responded to the call and organised a protest gathering to discuss the future course of their movement on November 7.

The highest decision-making body for the IITs, the IIT Council, in its meeting held on September 26, approved a tenfold increase in M.Tech course fee and to discontinuing the stipend to M.Tech. The council is chaired by the Minister for Human Resource Development.

As per the IITs, the move is aimed at discouraging non-serious candidates who use M.Tech as parking facility till they got jobs. “The fee hike will discourage non-serious students, who after a few months of stay in IITs, leave the programme midway to take up employment or to prepare for competitive exams,” the HRD Ministry's statement said.

Later, the council defending its decision argued that it as a step towards filtering uninterested students out of the system. It also issued a statement and clarified that the hike will be introduced gradually and will not affect the batch currently enrolled.

At present, the tuition fee for M.Tech ranges from Rs. 30,000 to Rs. 50,000 per year. Plus, all M.Tech students get a monthly stipend of Rs. 12,400. The IIT Council in its September meeting decided to increase the fee to Rs. 2 lakh per year and also to discontinue the stipend.

The move has attracted widespread criticism from academic and student community leading to protests across 23 campuses of IITs.

IIT BHU students have argued that the rationale to increase fee is dubious. They said that above concern can be easily addressed either by not allowing PSUs to recruit from GATE or the PSUs can recruit before the admissions to IITs begin or appointment of the PSUs made through a single-window alongside the admission to different IITs.

The students are of the view that these two policy changes will discourage the students from socially and economically disadvantaged sections from doing M.Tech.

One of the M.Tech students of IIT Delhi speaking to Careers360 said, “The 900% hike along with no stipend will hurt middle-class students who will now join jobs early to repay education loan. Will it help in improving the quality of students entering M.Tech, or encourage people to do research? We are going to intensify our protest in the near future.”

However, IIT Delhi director, V. Ramgopal Rao had earlier told Careers360 that the IITs will take care of its students and they need to wait till final details are out in public, and should not rely on rumours.