‘Lost and anxious’ during CAA protests 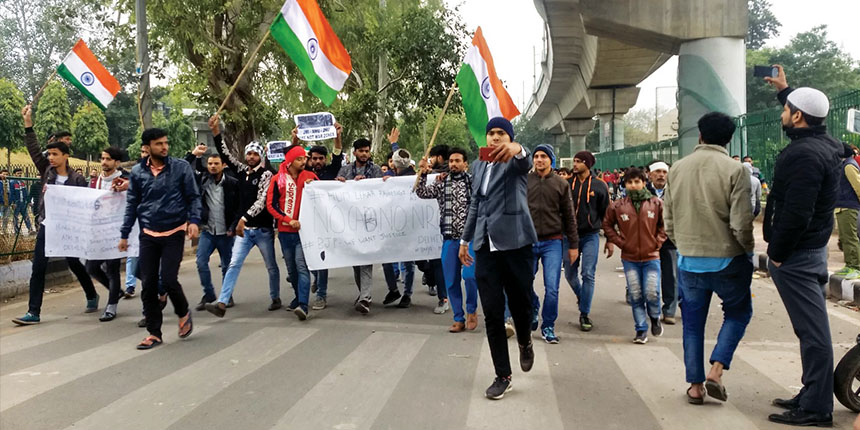 December saw university and college campuses across the country erupted in protest. First, students of JMI and AMU protested against the newly-passed Citizenship (Amendment) Act 2019 which paves the way for granting citizenship to immigrants and refugees from Pakistan, Bangladesh and Afghanistan but on the basis of religion. Muslim immigrants are ineligible.

In Jamia and AMU, the predominantly Muslim students faced intense police action. Over 100 students were reported injured with several permanently disfigured – one in AMU lost a hand, another in Jamia Millia may lose his vision in one eye. Students from around three dozen campuses rose in their support and against the newly-amended law.

A psychotherapist by profession, Akhavi has extended free professional help to students caught in the tumult. Unaccustomed to violence on such a scale, and in places like hostels that are generally considered safe, students are now finding it difficult to cope with the anxiety and paranoia triggered by the suppression of campus protests. Akhavi wasn’t the only one. Seventeen therapists, most of them from Delhi, stepped up to help.

Students have called the therapists from protest venues, feeling lost and anxious.

“A girl called me in the middle of a protest and said she was feeling very scared because she was alone,” recalled Akhavi. “She wanted to walk back home and wanted someone to be on call throughout. It was a different kind of request but circumstances demanded it.”

“There are students who had personal issues which were aggravated by what is happening in society and then there were a few who were actually affected by violence,” added Indu Chauhan, a trainee psychotherapist at Ambedkar University, Delhi, who offered free counselling as well.

Many callers reported that they were struggling with in their social circles because of ideological differences between friends. This has been one of the most common complaints brought to Akhavi.

“Students feel very strongly about this (CAA Protest) but their immediate circle may have opposing views,” she said. “They feel very isolated because of the conflicting situation. They are not able to negotiate how to be with people who have such opposing views.”

Such differences and the resulting isolation has caused some students to feel dejected and vulnerable. “Students who are part of the protest have not been able to connect with their families about it,” she added. “They are feeling very unsafe because nobody knows where they are at and if something were to happen – if they are detained or hurt – it would be very difficult for people to track them, which is also creating a lot of paranoia. People are genuinely scared of what might happen to them if they step out.”

For some, psychotherapy has opened up channels to deal with larger emotional challenges. “They want to have long-term psychotherapy and not just limit themselves to the issues that came around the protest,” said another professional therapist who
volunteered her time, Srividya Rajaram. “They are upset and are deeply concerned about the friends who [,they feel,] are being persecuted by the State.”

The anti-CAA protests exposed scores of students to violence. “I have often seen people who are torn between going to work and the normal routine, and getting down to the streets to participate in the resistance,” said Akhavi. “I found this as a good middle ground where we were participating and our contribution was our professional help.”

Rajaram, a therapist in Delhi for 15 years, decided to participate in the protest by helping those who feel vulnerable because of the violence.

Spreading the word through social media platforms, the psychotherapists have been assisting not just students but anyone distressed by the chaos a protest brings. Help is provided over the phone, over video calls or personal interaction.

“Everybody is providing professional help,” added Chauhan. “There are lawyers out there. People are providing shelter and food. As a therapist, at the time of turmoil, it is imperative that we, not just as individuals, but as professionals, are there for support.”