Mahatma Gandhi's life-size hologram projected at United Nations to spread the message of non-violence, including through education and public awareness.

NEW DELHI: In a first, Mahatma Gandhi made a special appearance at the United Nations, sharing his message on education at the world organisation as it commemorated the International Day of Non-Violence on the occasion of the Indian leader’s birth anniversary. A special life-size hologram of Gandhi was projected during a panel discussion organised on Friday by India’s Permanent Mission to the UN and UNESCO Mahatma Gandhi Institute of Education for Peace and Sustainable Development (MGIEP) at the UN headquarters here to commemorate the International Day of Non-Violence.

The International Day of Non-Violence is observed on October 2, the birthday of Gandhi. According to the General Assembly resolution of June 2007, which established the commemoration, the day is an occasion to "disseminate the message of non-violence, including through education and public awareness". The resolution reaffirms "the universal relevance of the principle of non-violence" and the desire "to secure a culture of peace, tolerance, understanding and non-violence". The panel discussion featured India’s Permanent Representative to the UN Ambassador Ruchira Kamboj; CEO of The King Centre, Atlanta Bernice King; and youth representative and digital education transformation champion Princess Hayu of Indonesia.

The discussion, moderated by UNESCO MGIEP Director Anantha Duraiappah, was focused on ‘Education for Human Flourishing’. It was part of the Ahinsa Lecture Series and kickstarted the 10-year celebration of UNESCO MGIEP. It was for the first time at the UN that a life-size hologram of Mahatma Gandhi led the panel discussion, a statement said. A voice-over accompanying the Gandhi hologram shared the iconic leader’s thoughts on education. “Literacy is not the end of education or even the beginning. By education, I mean an all-around drawing out of the best in the child and the man, body, mind and spirit. By spiritual training, I mean education of the heart,” Gandhi said. Ahead of the panel discussion, a message by UN Secretary-General Antonio Guterres was read out.

In his message, Guterres said Gandhi’s life and example reveal a timeless pathway to a more peaceful and tolerant world, as the UN chief called on the international community to walk this path together, in solidarity, as one human family. Director of the Mahatma Gandhi Digital Museum in Hyderabad Birad Yajnik told the event’s audience that the hologram was the second edition of the Gandhi hologram in 4k. He recalled that the making of the hologram was a process that started in 2018 when Ambassador Kamboj was in South Africa. In 2019, in association with the MGIEP, a dialogue with a hologram of Gandhi was envisioned. Ananda and his team researched the collected works of Gandhi and his thoughts on education. “At our end, digitally graphic files were further sculpted, merged with motion graphics to produce a high-definition hologram that narrated the script,” Yajnik said, adding that this version led the panel discussion at UNESCO in Paris and later in New Delhi. “The future of this hologram is to enable it with AI (Artificial Intelligence) voice engine that can engage the people of the world.

The message of Mahatma Gandhi is a message of peace and love, a message that the world desperately needs today. And this would be our small effort to bring it to the youth of the world through the language of technology,” Yajnik said. Guterres said in his message that the International Day of Non-Violence celebrates not only Gandhi’s birthday, but the values he embodied that echo across the decades: peace, mutual respect and the essential dignity shared by every person. “Sadly, our world is not living up to those values. We see this through growing conflicts and climate chaos. Poverty, hunger and deepening inequalities. Prejudice, racism and rising hate speech. And a morally bankrupt global financial system that entrenches poverty and stymies recovery for developing countries,” he said. The UN chief emphasised that the world can defeat these challenges by embracing Gandhi’s values and working across cultures and borders to build a better, more peaceful future for all.

“By investing in people’s health, education, decent jobs and social protection to prevent people from falling and catch them when they do. By ensuring access to financing and debt relief for all countries. By supporting developing countries as they build resilient infrastructure and protect populations from the impacts of climate change, while also accelerating the transition from planet-killing fossil fuels to renewable energy. “By securing and upholding the rights and dignity of all people - especially the most vulnerable, and girls and women who are too often denied their basic rights. By taking concrete action for inclusion, recognising multicultural, multi-religious and multi-ethnic societies as a richness, not a threat,” he said.

The Gandhi hologram made three appearances during the panel discussion, showing him both sitting and standing as he spoke about the values of education. “We assess the value of education in the same manner as we assess the value of land or shares in the stock market. We want to provide only such education as would enable the student to earn more. "We hardly give any thought to the improvement of the character of the educated. The schools and colleges are really a factory of turning out clerks for the government. On the contrary, real education consists in drawing the best out of yourself. What better book can there be than the book of humanity,” the Gandhi hologram said. Education should provide access, equity, quality and affordability, Kamboj said, adding that it is very critical to provide holistic development as well as upliftment and dignity for every individual.

Stressing the importance of resilience, Kamboj said while education is imparted in schools and colleges, “I wonder how much we teach our children how to deal with the ups and downs.” “That is also very critical...life doesn't always dish out the best moments, you have to learn to deal with the ups and downs and, therefore, I think education should also be transformative in the sense that you teach youngsters to be able to take setbacks as you also take your successes,” she said. 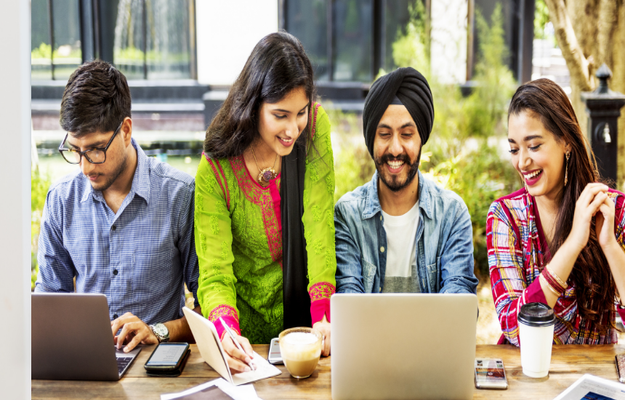