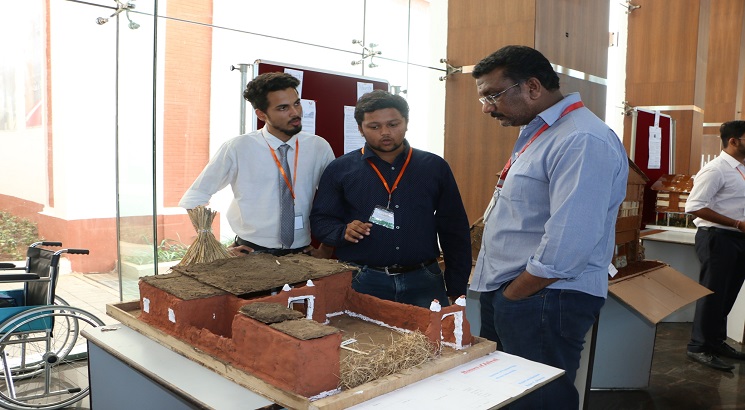 NEW DELHI, OCTOBER 23: Mahindra Ecole Centrale College of Engineering, Hyderabad organized Niketh: A traditional housing challenge. This competition invited entries that focused on preserving the wisdom of traditional construction practices, viewing them through lens of science, engineering and technique. A total of 45 entries from across India were received for Niketh and 20 were shortlisted to present their models at the final round.

“We at Mahindra Ecole Centrale are trying to build awareness about the sustainability of the traditional ways. Our ancient culture has witnessed many unique and surprisingly modern housing models. With Niketh, we are trying to get the students to capture the best from all existing ways to come up with ecologically viable models”, says Dr. Yajulu Medury, Director, Mahindra Ecole Centrale.

MEC’s Niketh focused on 3 areas to judge the winning entries: Identifying the traditional Indian housing typology, Understanding the Science, Engineering and Construction Techniques and Building a scaled prototype(1:10, 1:15) of the original house.

In Phase 1 of MEC’s Niketh, a two-page article was submitted for the identified/chosen housing typology. The article explained the reasons for choosing a particular housing technique(typology, region, period of construction, materials, etc.). It also sought to share the entrant’s understanding with factual figures or references added. An expert panel of 3 evaluated the emailed article. All final teams were invited to build a scaled prototype, which was showcased at Mahindra Ecole Centrale.

The final winning team of Gnanaprakash & Manoj Kumar from SRIT, Anantapur for their “Mud House” received a cash award of Rs. 15,000/-. The two runner up teams of Rajat.T & Rajat .S from Nirma University for House of Jalwali, Satvik and Kishore from MEC for Bamboo house received a cash reward of Rs. 10,000/- each. Certificate of excellence and participation were given to all finalists.