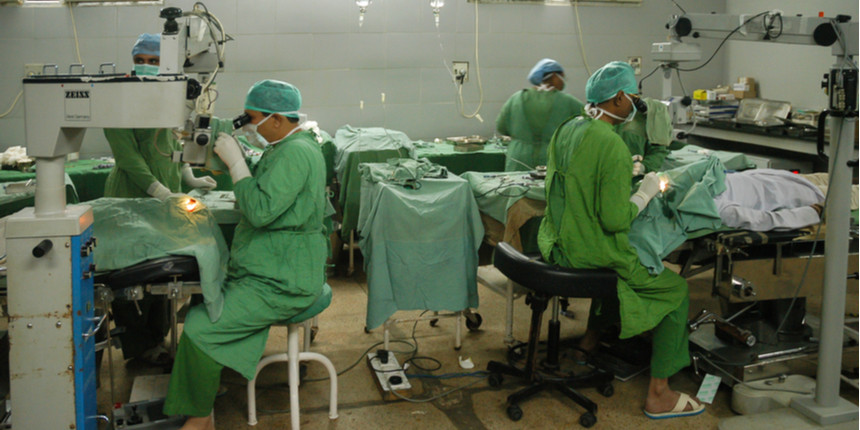 Most central government institute's students do not have to sign a bond (Photo courtesy : Shutterstock) Pritha Roy Choudhury | Sep 24, 2020 - 3:50 p.m. IST
Share Via

NEW DELHI: At a time when the country is reeling under the COVID-19 outbreak, senior resident doctors of Tata Memorial Hospital in Mumbai say they are being discriminated against when it comes to their allowances and tenure of residency.

They say they are paid stipends whereas their counterparts in government medical colleges get salaries and other allowances.

The senior resident doctors at Tata Memorial also have to sign a bond for an extra year at the hospital. The Medical Council of India or MCI has laid down in its guidelines that the course content of super specialization spreads only over a period of three years.

The amount paid as stipend slightly increases every year and also in the fourth year when the student serves the bond period.

“We were in a structured three-year program and we also had to sign a one-year compulsory bond,” said Dr Diwakar Pandey, a Surgical Oncologist who just completed his super specialization from the hospital in August 2019.

In most of the central government institutes, the students do not have to sign a bond.

However, students at the TATA Memorial Hospital, also known as TATA Memorial Center (TMC), have to sign a bond to serve the hospital for one extra year though it is also an institute under the central government.

There are seven medical colleges in India under the central government which offers super specialization courses but they are under different government departments.

The students at TMC say they have to sign a bond for an extra year as it is an autonomous institute.

Where the senior residents of TMC lose

After completing the three-year program, a doctor has to serve TMC in Mumbai or any satellite hospital in its chain, spread across the country.

The students cannot apply or appear for any other engagement during the fourth year which is not the situation in other medical colleges under the Central government.

Highlighting a 2019 case, N S Murthy, a medical education activist, said, “It so happened that there was an advertisement for the post of an assistant professor. It required that the candidate should have completed DM or MCH. Now, a fellow from TMC who has completed a three-year mandatory course and is qualified for the post cannot apply. Another candidate, who has completed the super specialization from B J Medical College and Civil Hospital Gujarat got selected.”

The most pressing problem, the doctors say, is the disparity in the pay package. “Unfortunately, the response that we are getting is very ambiguous. A lot of the institutes under the central government get their salary according to the 7th Pay Commission. The 7th Pay Commission gives you a salary which is more than Rs 1 lakh per month,” said Pandey, adding that the pay they get in TMC is nowhere near the one recommended by the 7th pay commission.

“TMC is the only medical college that is not paying according to the 7th pay commission,” added Dr Ravikant Reddy, also a Surgical Oncologist who completed MCH from TMC in August 2019

During the bond period, the doctors completing their super specialization from TMC either serve in the hospital in Mumbai or they can also opt for the satellite centres across the country. TATA memorial center has a number of satellite centres. “This started two or three years back. There are multiple centres all over India and its periphery also,” said Pandey.

For completing the super specialization, a doctor after completing junior residency has to serve in a hospital for at least three years before appearing for the NEET PG entrance exam.

By the time he joins a medical college, he is already around 35 years old with a family to take care of.

The doctors here are given a hostel which has to be shared with two other students, so a family life during this period is out of the question.

The other medical colleges provide a one-bedroom flat within the hospital premises during their period of study.

Pandey, married with a three-year-old child, feels the financial pinch in a metropolitan city like Mumbai, though he does not blame the hospital for the accommodation. “I don't blame TMC. Mumbai is a huge city and it has space-related issues,” says Pandey who has come back to Raipur in Chattisgarh, his hometown, to start practice on his own.

Back On Track: How a govt programme is helping women back into STEM
Pritha Roy Choudhury | Sep 24, 2020