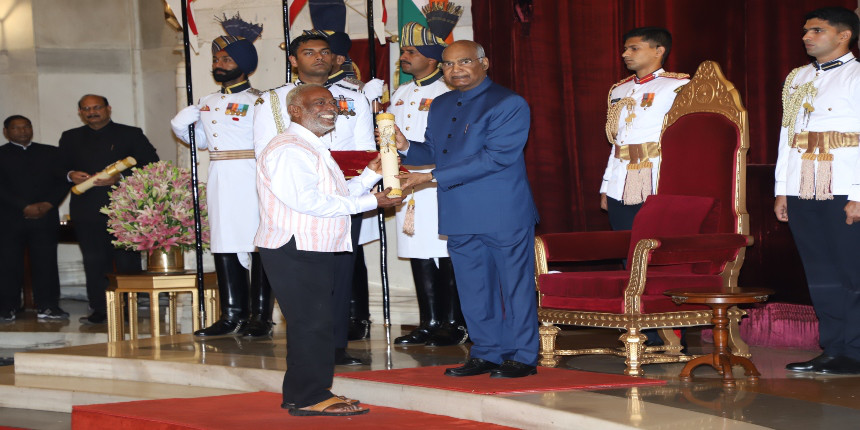 NEW DELHI: Three members of the Indian Institute of Technology-Madras community have won Padma Awards. These are the higher civilian awards bestowed by the Indian government and the list of awardees in 2020 was announced on January 25.

Pradeep Thalappil, a professor in the Department of Chemistry has won the Padma Shri award. Amongst the notable alumni, Prem Watsa, founder and chairman of Fairfax Financial Holding and Venu Srinivasan, chairman of TVS group will be awarded Padma Shri and Padma Bhushan respectively. Srinivasan is also an honorary professor at IIT-M.

The list of awardees was announced prior to the 71st Republic Day celebration on Sunday. Conferred for exceptional and notable public service, the Padma award is given in various disciplines like art, social work, public affairs, science and engineering, trade and industry, medicine, literature and education, sports, and other such fields.

Interestingly, the list includes bhajan singer Ramzan Khan. The Times of India has reported that Khan is the father of Feroz Khan whose appointment in the Sanskrit Department of Banaras Hindu University has led to protests by Hindutva groups.

This year, the award has been conferred upon 141 personalities – seven won Padma Vibhushan, 16 Padma Bhushan and 118 Padma Shri awards.

The awards will be presented by the President of India in March or April at the Rashtrapati Bhawan.

‘Contributors in Education and Literature’

As many as 27 citizens have been honoured for significant contribution in the field of education and literature, including a posthumous awardee.

From Puducherry, Manoj Das, a bilingual writer and a teacher of English literature and philosophy have been bestowed with the third-highest civilian award- the Padma Bhushan. Das received the Padma Shri award in 2001.

A US-based scholar, Jagdish Sheth is also amongst the Padma Bhushan awardee. According to The Print, last year in January, Sheth had conferred a leadership award on Narendra Modi. Modi became the first-ever recipient of the Philip Kotler Presidential Award for ‘selfless leadership’ and ‘visionary leadership’.

Kazi Masum Akhtar from West Bengal, Gloria Arieira from Brazil, Damayanti Beshra from Odisha, Lil Bahadur Chettri from Assam, H. M. Desai from Gujarat have been honoured with the Padma Shri award. Historian Meenakshi Jain is also among the list of the awardees.

Late Indra Dassanayake, a renowned professor of Hindi from Sri Lanka has also been posthumously awarded the Padma Shri. Dassanayake has been lauded for her pioneering role in the strengthening of India-Srilanka ties.