‘This is what I was meant to do’: IIT Madras professor Preeti Aghalayam 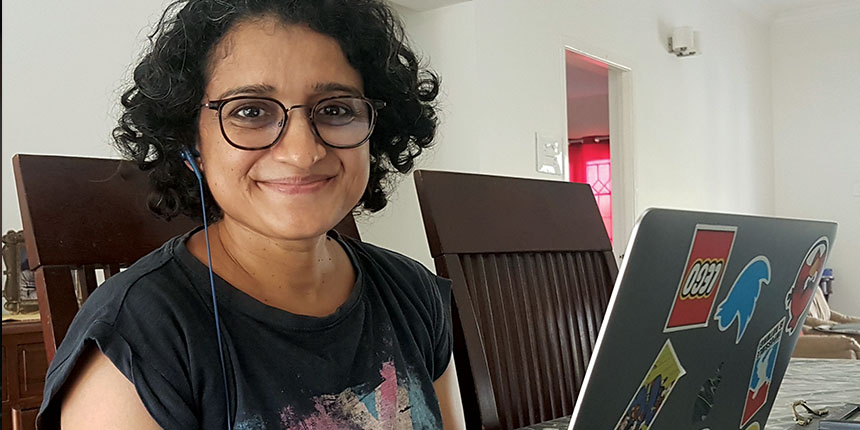 NEW DELHI: A senior professor in the Department of Chemical Engineering, Preeti Aghalayam, is one of just a handful of women faculty members at Indian Institute of Technology Madras. She has escaped “overt discrimination”, she said, but believes insisting she’s fine does a “disservice” to women who do face it. Winner of the prestigious INAE Young Engineer and the Amar Dye Chem awards, she develops games to use for teaching in class. In another hat, she’s a marathon runner and president of the Chennai Runners Association. In an interaction with Careers360, she spoke about being a woman in science, running and how “science doesn’t discriminate”.

Q. Science is often considered a male-dominated field. What has been your experience?

A. Growing up, this “male-dominated” aspect never really registered in my mind. My parents were both academics and I was in and out of their offices often, and everyone there was always encouraging. I don’t remember ever consciously considering the fact that I was a woman/girl a deterrent to what I wanted to do. Right from school, I wanted to study science, and I wanted to be a teacher or professor. Many of my family members – male and female – are teachers, so it was an obvious choice for me. Of course, studying in IIT Madras, and then subsequently abroad, opened a lot of doors for me.

I have been in chemical engineering since 1991 when I walked into the beautiful IIT Madras campus. I particularly like puzzles and maths, and research is very much like putting together a really difficult puzzle, and the pleasure one gets when pieces fall in place is incredible. Now, I am here for so many years and am often the only woman in a room full of men in meetings or whatever. It’s fine. I can deal with it. This is what I was meant to do.

Q. Did you face sexism or discrimination in your academic life or research environment?

A. This is a good question. I was at a session at a corporate women’s day event several years ago and the moderator asked me something similar. I answered then that I seem to be very lucky and have escaped overt discrimination. I have been thinking about that answer a lot over the years. I don’t think it is untrue. I am a bit immune to it perhaps, and immediately call it out – even if the intention was good. So, I go to bed at night thinking everything is fine. But I am in a space that is majority male and there is a minority of young women here. My claiming “I am just fine” does them a clear disservice. Yes, there is gender (and other kinds of) discrimination, we cannot deny it. I am confident it is improving and people are becoming more aware and conscious of their role in making the world a better place than it has been.

Q. Tell us about the games you developed to enhance learning.

A. I did not respond very well to traditional lectures when I was a student. I tried very hard, I even pinched myself awake at times. I took notes and the writing trailed off into gibberish at some point in the lecture. I could act like those things did not happen and, now that I am here, drone on in class. Or I could try some fun things that make me happy. I sincerely hope these experiments have helped students – the feedback is generally good but very sparse, to be frank. My objective is to try to make the students happy to be here. Regarding games, my attempts so far have been ad-hoc but we are trying a more structured approach and my colleague Kartic Vaidyanathan and I have an elective course aimed at developing games for IIT classes.

Q. What are the challenges that women in science face and what are the opportunities they have?

A. In terms of challenges - it starts at home with the gendered ideas of what men should do and what women should do. Then, in school this is reinforced many times by the nature of the exams, the peers and even teachers. But science doesn’t discriminate. I am very proud of all the young women who are taking up science, in India, in recent times. Right now, in IIT Madras, we are 10 percent women faculty, and I really hope that the trend changes over time.

For women who are interested in a career in science, opportunities are definitely available (if not equitably in all pockets of the country). Good performance is generally rewarded and valued. While we definitely need more leaders who envision a gender-equal future for science in India, and there are struggles every step of the way, I see hope. There is no doubt that the country needs more women in the (formal) work-force, and in science, the value we bring can be immense.

Q. You also run marathons. How did you become a runner?

A. I was the president of Chennai Runners, a very large and diverse group of runners in the city, for a couple of years. Chennai Runners organises the very popular Chennai marathon which has become a very important part of the city’s calendar. I was very closely involved in the event for a few years.

I am very passionate about running in particular and fitness in general. During my time in Chennai Runners, I was keen to focus on bringing the message of healthy running to women of the city - women of all ages. Initially, we were a group of hardly five to six women runners, but this has now grown so phenomenally, it makes me very happy. The enthusiasm and discipline they demonstrate are thrilling! When you see so many women running on the roads in the early mornings, particularly on Sundays, it is a great feeling.

As for my personal journey in running, I have taken part in a very large number of marathons, half marathons and other races, and really enjoyed every single one of them. For the current moment, I am taking it day-by-day and focusing on keeping physically (and therefore mentally) fit. Most likely my next event will be a half marathon (21 kilometres) in my hometown, Mysuru, in September, hoping the situation in the world improves by then.

Now, I am here for so many years and am often the only woman in a room full of men in meetings or whatever. It’s fine. I can deal with it. This is what I was meant to do. I am very proud of all the young women who are taking up science, in India, in recent times. Right now, in IIT Madras, we are 10 percent women faculty, and I really hope that the trend changes over course of time, and that we all do our bit towards it.