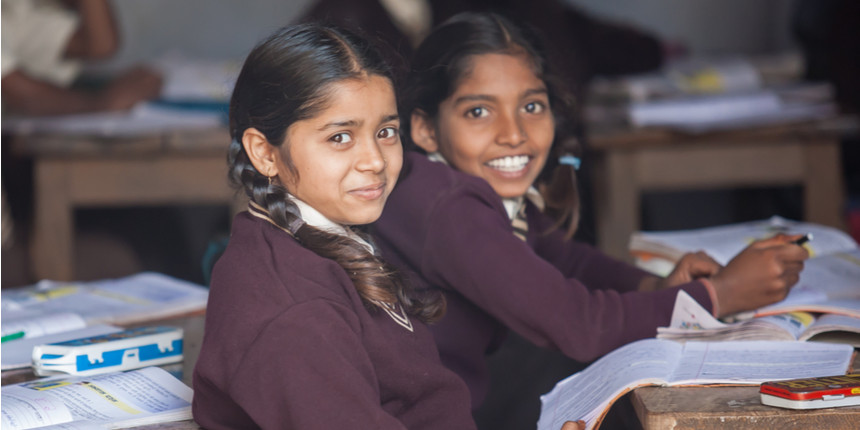 THRISSUR: On July 29, 2020, the Kerala High Court, hearing a writ petition filed in 2017, directed the State of Kerala and the Director of Public Instructions to sanction the establishment of a Government Lower Primary (LP) School at Elambra area of Manjeri municipality.

The High Court judgment may have drawn the curtains on 35 years of battle between the Kerala Government, headed by the Left Democratic Front (LDF) and the United Democratic Front (UDF) at different points, and the residents of Elambra area, located a few kilometres from Malappuram, the fastest growing city in the world, as per an analysis of United Nations data by The Economist. But Muhammed Faizi, Elambra resident, teacher at its madrasa and the petitioner, fears the government may appeal the verdict and stall the school’s construction yet again.

Faizi’s petition argued that Elambra does not have a mainstream primary school within a kilometer, as mandated by the Right to Free and Compulsory Education Act (RTE) 2009. The residents of Elambra had to depend on the primary schools located three or four kilometers away. Predominantly Muslim, Elambra children come from around 350 families of agricultural labourers and porters. Every day, they either squeeze into congested auto rickshaws and local buses or walk the three kilometres to school.

Nearly everyone agreed Elambra needed a school except the state government.

The village community and the municipality officials made requests. Recommendations went out from the assistant educational officer, the district educational officer, deputy director of education, the State Human Rights Commission and the State Commission for Protection of Child Rights. But despite all that, and despite electing an MLA who would become the education minister in the most literate state in India in 2006, residents of Elambra have had to wait for 35 years and a High Court judgment to be granted a primary school.

The state government’s main contention over the decades has been that it cannot consider “individual requests” as construction of a school can only be done if such an “educational need” is identified in the school mapping done by the state.

How school land was bought

Elambra’s fight for a government LP school formally began in 1985.

The community had sought a school for its youngest children -- primary schools have Classes 1 to 5 -- even before but was refused. The government had said there was no land.

In 1985, over 300 Elambra families pooled resources and bought an acre of land for the construction of a primary school.

“While buying the land from the two families that owned it, one of the residents had to pawn his wife’s gold chain to raise money,” said Faizi, 46. “My grandfather, when the local leaders approached him, gave them the money he had kept aside for pilgrimage. There are also people who contributed their first salary to buying the land. That’s how this land was bought.”

He added: “Many people, regardless of their religious and political leanings, have put their efforts into buying this land and making the school a reality.”

The "school land without a school", as it is locally known, serves as a football pitch till the decision is finalised.

A joint purchase, the land was registered in 1993 to a local madrasa committee which was ready to hand it over to the government once the school was sanctioned.

“Once the land was registered the people approached the government again, but the governments that came and went did not give approval for a variety of reasons. Some communal, some political. Even though the municipality officials and other representatives tried a lot it did not happen,” said advocate P Venugopal who appeared for Faizi in court. Elambra does not have any private school. Its only institution offering mainstream, secular education is the early childhood care and education centre, or anganwadi, for infants.

As they waited, children continued to struggle to get to school. “In my childhood, when I used to go to school, we had to walk the entire way,” said Faizi. “But nowadays kids depend on auto rickshaws and buses. The community here hails from economically weak backgrounds, most of us are agricultural labourers, coolies or madrassa teachers. The transport itself would cost Rs 600 to Rs 1,000 which is too expensive for the families here.”

However, several developments in the first decade of this millennium would help their case. In 2002, right to education would become a Fundamental Right with a Constitutional amendment. In 2009, the Right of Children to Free and Compulsory Education Act 2009 was passed in Parliament. The law made the state responsible for placing a primary school in every habitation. The Kerala RTE rules, framed in 2011, mandate a primary school within one kilometre of every habitation. All of Elambra’s subsequent appeals for a school would cite this law.

Upon repeated requests, in 2014, the assistant educational officer of Malappuram, in a survey to verify the “educational need” in Elambra, recommended establishing the LP school.

Following this, the district education officer of Malappuram conducted a site inspection. The inspection report, dated March 27, 2015, said: “The need is that there is no public school for primary education in Elambra area in Manjeri Municipality and therefore a primary school in the Government sector may be sanctioned.”

Following this, the deputy director of education, Malappuram, wrote to Kerala’s director of public instruction “recommending” the establishment of the LP school. 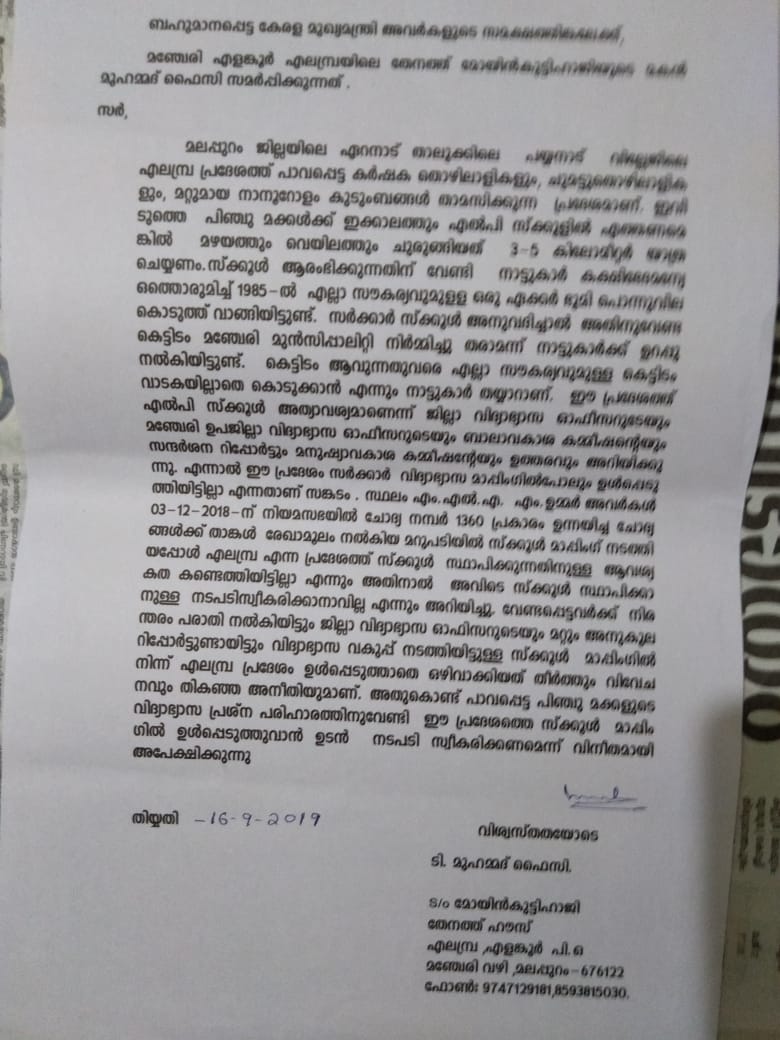 One of the letters Faizi sent to chief ministers

Moreover, inspecting Faizi's complaint in 2015, the Kerala State Human Rights Commission found that children from “more than 300 families” had to depend on “LP schools situated more than four kilometers [away]” and directed the government to sanction the school.

The KSHRC, in its report released on February 6, 2016, said: “The complaint is disposed of directing the Director of Public Instruction to take action for sanctioning school in this area by giving priority to the request of the complainant who have purchased land for the school in 1985 and ready to provide the facilities.”

Based on a similar complaint filed by Faizi, the Kerala State Commission For Protection Of Child Rights, on July 4, 2016, directed the Department of Education to “take time-bound action” to open an LP school in Elambra.

Even then, no action was taken by the government.

Faizi, representing Elambra, then filed a writ petition in 2017. However, the government defended itself citing a single-bench judgment from 2015 related to school mapping. In 2015, the government, on the direction of the High Court, had conducted a survey to identify areas with educational needs that would require schools. The government found three such areas in the entire state. Elambra was not among them.

“The government said that Elambra does not come under school mapping and that individual requests cannot be considered. Another point was the Kerala Education Act and Rules which states that schools can only be constructed once the government finds an educational need in the area and notifies the authorities,” Venugopal said.

Venugopal, representing Elambra and Faizi, countered that the said rule in the state law applies only to private schools. “Our case was helped by a previous judgement in the school mapping case in which there were a lot of points in our favour,” said Venugopal. 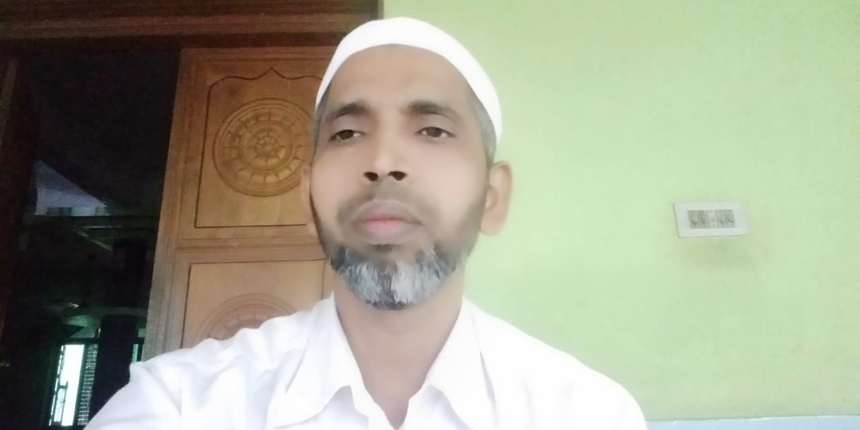 Finally, the Kerala High Court brought relief to the Elambra residents on July 29. It directed the state to construct a school “within a period of three months”. The court noted a “conspicuous failure” on the part of Kerala state and the Director of Public Instructions as there is “absolutely no valid reason” to ignore the various reports submitted to it by government bodies.

Faizi said that Elambra’s wait was due to the government’s “disregard” for the people.

“It was the disregard of the government that made us wait for this long. ‘Governments’, I should say. Different governments have disregarded our request pointing to their policy, whether it is UDF or LDF,” Faizi.

“Now that the High Court decision has come, everyone is excited. Everyone is hoping that we will get the school,” said Faizi. “Then again, we don’t know if the government will file a counter appeal.”

NEP 2020: School education with new structure, changes in board exams

NEP 2020: New standards and training on online tools for teachers