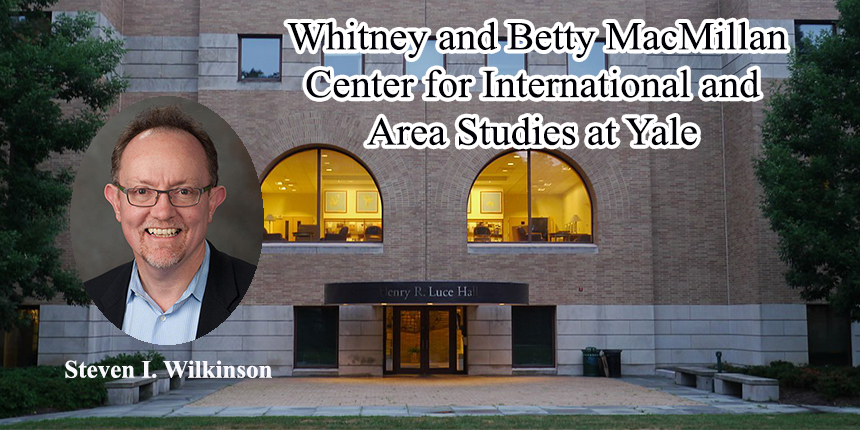 NEW DELHI, APRIL 24:  Steven I. Wilkinson, the Nilekani Professor of India and South Asian Studies, has been appointed the next Henry R. Luce Director of the Whitney and Betty MacMillan Center for International and Area Studies at Yale, Provost Ben Polak has announced.

He will begin in his new post on July 1.

Wilkinson, who is also a professor of political science and international affairs, has focused his research on the causes of ethnic violence, corruption in politics, and civil-military politics in South Asia.

He is the author of “Votes and Violence: Electoral Competition and Ethnic Riots in India” and “Army and Nation: India’s Military and Democracy since Independence.” He is the editor of “Religious Politics and Communal Violence in India” and co-editor of “Patrons or Policies: Patterns of Democratic Accountability and Political Competition.” His current research project, co-authored with Saumitra Jha of Stanford University, looks at the effects of war on individual political behaviour and conflict, through cases as diverse as the French Revolution and the partition of India.

A native of Scotland, Wilkinson received his first degree (in history) from the University of Edinburgh. He earned his M.A. in history at Duke University, where he also began his teaching career. He then taught at the University of Chicago, where he chaired the university’s interdisciplinary Committee on Southern Asian Studies, before coming to Yale in 2009.

Wilkinson will succeed Ian Shapiro, Sterling Professor of Political Science and professor in the Institute for Social and Policy Studies and of management, who has served as director of the MacMillan Center for 15 years.

“Ian encouraged me and many other faculty to come to Yale by emphasizing what its resources and programs could do to support interdisciplinary research, for faculty and our students,” says Wilkinson. “MacMillan, through its many councils, programs, and initiatives, has been a vital part of my time here at Yale. I have particularly appreciated Ian’s efforts to improve graduate student funding for dissertation fieldwork, which makes Yale a leader in supporting real engagement in the areas we study. He has done this all with vision, efficiency, and a great sense of humour.”

In his announcement, Polak thanked Lewis and the faculty advisory committee and noted that he joined President Peter Salovey and many others across the campus in being grateful for Shapiro’s years of service as a director. “The thriving MacMillan Center that we know today was shaped by his hands, and we are fortunate to know that it will continue to flourish under Professor Wilkinson’s leadership in the years to come,” the provost said.

Shapiro called Wilkinson “an outstanding, inspired choice,” adding, “I can’t think of anyone better qualified to take the MacMillan Center, and international and area studies at Yale, to the next level.”