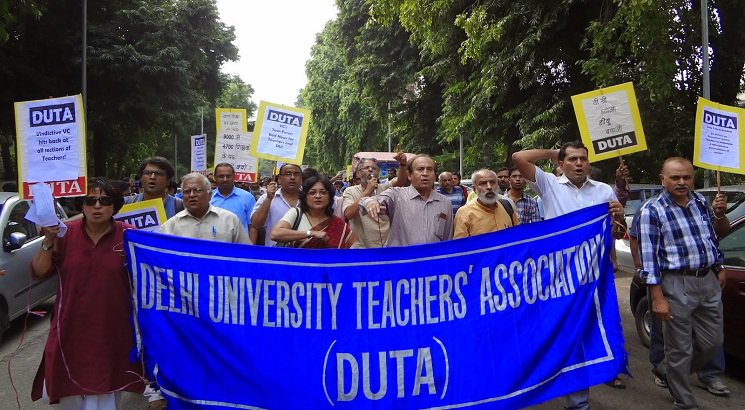 New Delhi: A delegation of the Delhi University Teachers Association (DUTA) met the University Grants Commission (UGC) to deliberate upon the MHRD notification on the Seventh Pay Revision along with worrying features of the Draft UGC Regulations 2018.

The UGC Chairman, after giving a patient hearing to the DUTA delegation, has promised to examine the matters positively and has sought a detailed feedback on all the pending issues.

It was decided by both the parties to meet after one month, that is, March 12, 2018 to take stock of the situation and to proceed further.

The two parties discussed the Clause 18 of the MHRD notification on the pay revision according to which 30% of the total funding is to be generated by the institutions themselves in order to get the 70% funding of the Government. As per the delegation, this marks the death-knell for publicly funded higher educational institutions as institutions will be starved of funds or massive fee hike will throw out students from socially and economically deprived sections.

All sections of the Delhi University community, namely, the students, teachers and the non-teaching staff, have come together against this draconian provision to resist the onslaught on Higher Education.

They also deliberated upon the 14.27% increase in the basic pay of teachers as compared to minimum 40% increase in the last two pay revisions. Further, the MHRD notification has led to the withdrawal of the Ph.D./M.Phil increments to dis-incentivize research, downgrading every level of Assistant Professors with lower pay, early stagnation of senior teachers at the level of Associate Professors, Professors and Principals, no promotion to Professorship in colleges.

The teachers have alleged that the retrograde provisions of the Review Commission will drive away talent from the teaching profession.

There is also anxiety among the teaching community related to the Draft UGC Regulations 2018. as per DUTA, the Draft UGC Regulations contain provisions which have increased the difficulty level and the qualifications both at the level of direct recruitment and promotion of teachers at different levels. The proposed screening criteria give more weight to UGC scores compared to higher degrees like Ph.D. and also accord irrational parameters of quantification for academic qualifications and requirements of publication.

“The insistence on Ph.D. both for direct recruitment and promotion of teachers to various levels is inimical to the cause of academics. The attempt to make Ph.D. mandatory for promotion to the level of Associate Professors in colleges with retrospective effect along with the refusal to count the period of study leave for the promotion of teachers amount to in effect denial of promotion to teachers altogether. There is no clarity about the relaxation given to the cases of promotion pending since 2009 owing to the retrospective implementation of the discredited API/PBAS in the VI Pay Revision,” it has claimed.