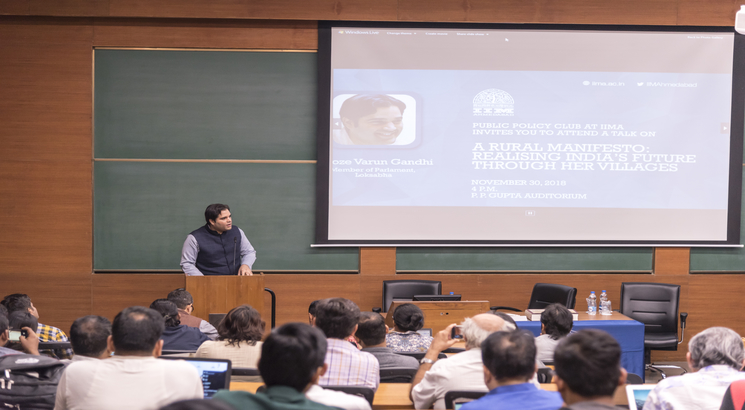 NEW DELHI, DECEMBER 1: Addressing public policy graduands at Institute of Management Ahmedabad (IIMA), Feroze Varun Gandhi discussed about the existing inequalities in rural and urban India and the much needed political reforms, at an event organised by the Public Policy Students Club of the Institute.

The lecture was attended by around 100 people including students from the PGPM, Food and Agribusiness Management (FABM) and Armed Forces Programmes besides staff and some faculty members of IIMA. Varun Gandhi is a Member of Parliament and has been lecturing at leading universities and policy thinktanks and civil society organizations across India.

At the session, he also released his new book 'A Rural Manifesto: Realising India’s Future Through her Villages'. The talk gave a peek into his 2.5 years of research behind the book, fondly referred to as ‘the unreadably dense volume’ by him. He gave succinct examples from his experiences, both urban and rural, to highlight the inequalities prevalent in Indian society. He discussed how ‘privilege perpetuates privilege’ and how technology has the potential to act as an equaliser if used well. He spoke in detail about possible political reforms that would help strengthen India’s democratic governance, such as the parliamentary address of public petitions, need for addressing electoral corruption and strengthening the parliamentary discussion process on passing laws. Among other things, he also talked about grassroots innovations in the rural economy.

Second-year PGP student and coordinator of the Public Policy Club, Aditya Govil said, “The talk was highly insightful and displayed various facets of the problem in the agriculture sector in India. Encompassing a mix of academic as well as practical knowledge, Mr Gandhi focused on the growing inequality in the country leading to an increase in inequity in the society as well. The premises that a change in the country’s systems and institutions is related to the way politics is run in this country was well brought out through a series of examples in modern day India. Mr Gandhi stressed upon the fact that the future of the country is in the hands of young, bright minds and narrated incidents from all across India that suggested this.”