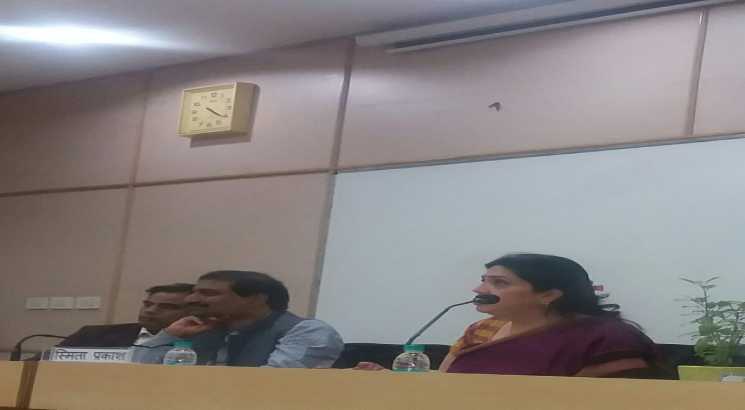 NEW DELHI, NOVEMBER 16: Indian Institute of Mass Communication celebrated the National Press Day on November 16, 2018. On the occasion of national press day, the institute organised a lecture on situation of women in media. Among the distinguished guests who graced the occasion were editor and proprietor of ANI, Smita Prakash, newly appointed Vice Chancellor of Mahatma Gandhi Central University along with Director General of IIMC, K G Suresh.

While addressing the gathering, K G Suresh highlighted how the Press Council of India came into existence on July 4, 1966 and become operational from November 16, 1966. He mentioned the body was set up to act as a moral watchdog. Speaking about the freedom of media, Dr Anil K Rai Ankit, said that in the present scenario with freedom of press comes responsibility. He added that as a journalist one has to be self-regulated and ensure that the journalist builds his or her credibility as his story or work is being evaluated by lakhs of people.

Situation of Women In Media - Yesterday, Today and Tomorrow

Smita Prakash spoke at length of how women are coming to the forefront in the field of media. She added in the early 90s, women journalists were given soft stories to be covered. However, with the passage of time, women have made their mark in the field of journalism. She added that women should aggressively take up challenging roles as a journalist and try to make their mark in different beats. Smita Prakash added that while reporting a difficult story, women journalists should try to maintain a balance in terms of covering the news correctly and at the same time ensure that they do not risk their life.