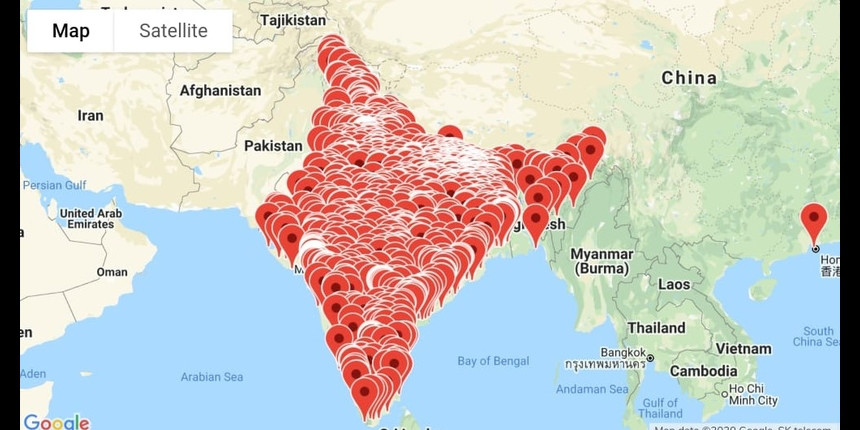 NEW DELHI: In the portal launched by the students and alumni of the Indian Institute of Technology (IIT) Delhi, most requests for transportation seem to be from metro cities and well-connected towns.

The examinees’ locations tracked on the portal’s map and by the evening of August 31, the map was crowded with requests from hundreds of candidates. However, the map showed that a majority of the requests have been from within or around metropolitan cities such as Bengaluru, New Delhi, Mumbai, Kolkata and Hyderabad.

This suggests that it is not just students in remote areas who are finding it difficult to get to exam centres in the middle of the COVID-19 outbreak, but also those from reasonably well-connected places.

One of the major arguments mounted by students seeking postponement of the exams -- JEE Main begins tomorrow -- was that the pandemic has disrupted public transport. Metro rail services in Delhi-NCR, for example, have been shut for months and will resume on September 7, as per the ministry of home affairs latest ‘Unlock 4’ guidelines.

The biggest cluster of requests seemed to come from states like Uttar Pradesh, Bihar. In Uttar Pradesh, a majority of requests were from places close to well-connected cities like Lucknow, Varanasi, Kanpur and Agra. In Bihar also a similar trend was evident with most requests from cities such as Patna and Muzaffarpur.

The Supreme Court had allowed the National Testing Agency (NTA) to conduct exams as per schedule despite widespread protests from students and parents who requested postponement of the exams citing health concerns due to the COVID-19 threat.

India, meanwhile, recorded the highest number of COVID-19 cases in a day on Sunday.