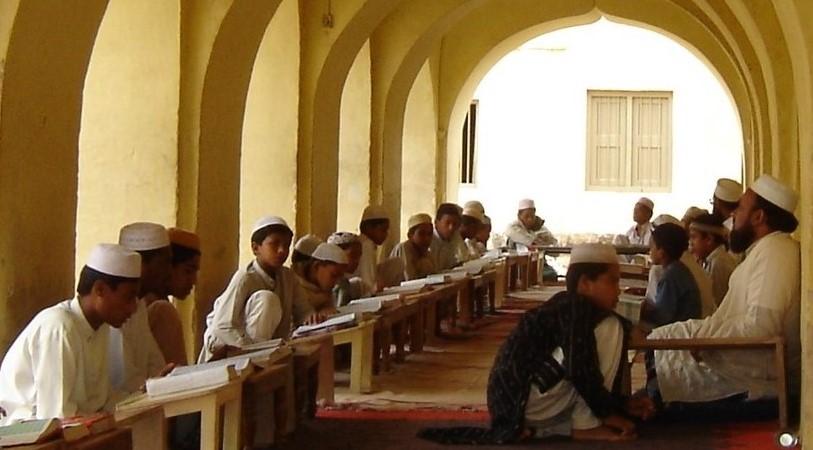 NEW DELHI: The Central Government has underfunded its scheme for mainstreaming and modernising madrasas for years and now, states will have to cover some of its dues. Madrasas are Islamic seminaries. The scheme promotes secular and modern learning in them.

In September, the Project Approval Board that sanctions funds for the Scheme for Providing Education to Madrasas/Minorities, met and discussed how they can make the Rs 120 crore allocated to the scheme in the 2019-’20 budget stretch to cover funding arrears accumulating since 2013-’14. They decided they cannot.

The board, chaired by a joint secretary of the Ministry of Human Resource Department, figured its best bet is to try “to meet the expenditure approved…for previous years” with this year’s budget and seek more funds from the Ministry of Finance. Non-official member Shahid Akhtar simply observed that the amount is “very meagre” and that “it is not possible to modernise or develop madrasas…on this budget”.

The minutes of the meeting were made public in October and are on the MHRD’s website.

In just one component, the Scheme for Providing Quality Education in Madrasas (SPQEM), the “total pendency” till 2016-’17 amounts to Rs 194.93 crore. The allocation of Rs 87.88 crore to it in the current financial year is not sufficient to cover even the pending dues.

The SPQEM provides salaries to teachers teaching secular subjects such as mathematics and English at madrasas. The second component provides funds for infrastructure development. The accumulated arrears are so high and the annual budgetary allocation so low that “new proposals were not sought for the year 2019-’20”.

There’s another catch. The Centre will no longer furnish the funds it sanctioned but reneged on over the years. The ministry changed the system of funding for the scheme in 2018 and now States, including poor ones like Uttar Pradesh and Bihar, will have to find 40 percent of the sums owed to them on their own.

Originally, the Scheme for Providing Education to Madrasas/Minorities was a fully Centrally-sponsored scheme, paid for by the Government of India. But in 2018, the BJP government revised it, turning it into a “shared scheme”, funded jointly by the Centre and states in a fixed “sharing pattern”. In the new system, the Central Government pays only 60 percent of the funds for most states and 90 percent for the northeast and Himalayan states. The state governments must find the rest.

States were expecting the Centre to pay what it owed before the 2018 revision in full. They’ve now discovered that the new sharing pattern will be applicable to those arrears as well. This means that where the Centre was once owed states the full Rs 194.93 crore in pending dues, it will now give only 60 percent of that.

The minutes say: “It was …clarified that after revision of funding pattern in 2018-’19, any release form the fund allocation from 2018-’19 onwards will attract the new sharing pattern since the budget is allocated for that year. It may be so that [the] first instalment…was released prior to 2018-’19 with 100% central share. However, the second instalment to be released after 2018 will be as per revised norms.”

States and the scheme

The representative from Uttar Pradesh told the Board that with both components of the scheme taken together, the arrears owed to Uttar Pradesh alone is over Rs 500 crore.

“They[, that is, Uttar Pradesh] will not be in position to run the scheme with such a small amount,” says the minutes of the meeting. “They have not submitted proposal from 2017-’18 due to huge pendency at the Centre.”

The state’s representative also told the board that “the pay of teachers under the scheme (SPQEM) is lower than the minimum wages in the state”. Graduate teachers are given an “honorarium” of Rs 6,000; postgraduate teachers get Rs 12,000 per month. In February, UP teachers hired under this scheme had protested in Delhi – they had not been paid for close to three years.

The board has decided to allocate the Rs 87.88 crore available for SPQEM in “proportion [to the] number of madrassas in states which have pending releases as approved…up to 2016 – ’17”. Eight states will get a share in this – Chhattisgarh, Madhya Pradesh, Bihar, Andhra Pradesh, Rajasthan, Jharkhand, Karnataka, Uttar Pradesh.

Here is how this year’s budget for SPQEM will be divided over states:

Uttar Pradesh, with 10,809 madrasas, will claim nearly 80 percent, or Rs 69.59 crore of the total funds. But it will have to fund a large section of the scheme itself.

The PAB meeting minutes explains that the restructuring of the scheme had caused delays in release of funds. But delays have almost been a central feature in the management of this scheme.

States are partly responsible. Several of them have unspent funds left with them. Andhra Pradesh was unable to use the Rs 48.96 lakh released out of a grant of Rs 97.92 lakh sanctioned in 2013-’14 because of the state’s bifurcation and creation of Telangana in 2014.

Finally, the Board was told there were “discrepancies or deficiencies” in the proposals submitted by the sates in the last quarter of 2018-’19 which caused delays.