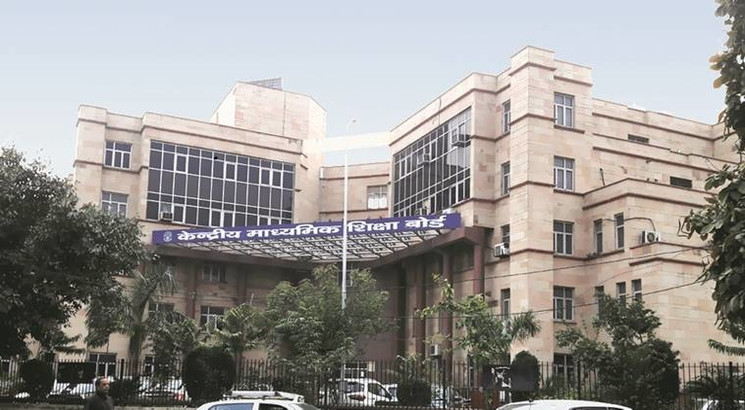 NEW DELHI, July 16: In a welcome development for all NEET qualified candidates worried about the status of their MBBS and BDS admissions, the Central Board of Secondary Education (CBSE) has decided to file an appeal against the order passed last week by the Madurai Bench of the Madras High Court, as per which 196 grace marks were to be awarded to all candidates who had appeared for the exam in Tamil.

As tweeted by noted education activist Dr. Amit Gupta, “CBSE today filed a case in Supreme Court against the Chennai High Court (Madurai Bench) order on providing grace marks in #NEET for Tamil medium students.. The case will be listed on urgent basis..”. 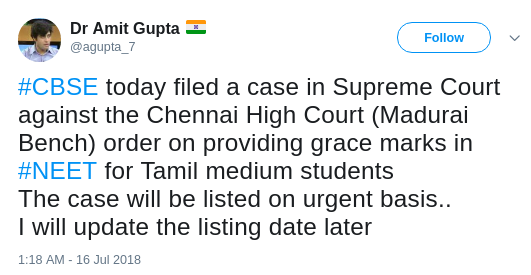 While it is currently unclear when the Supreme Court will take the case up for hearing, candidates will be hoping it happens at the earliest given that the second round of counselling at the Centre and in many states has been currently postponed due to the ongoing legal tussle, leaving their fates hanging in the balance.

The CBSE’s appeal comes two days after a candidate from Chennai had already approached the Supreme Court against the Madras HC verdict. As per media reports, Sathya Devar, a NEET candidate allotted a MBBS seat in Chengalpattu Medical College after Tamil Nadu completed its state-level counselling for Government medical colleges between July 1 and July 7, was forced to move the apex court as he was afraid he could lose his seat due to the Madras HC order.

Thousands of candidates across the country, who have already been allotted seats through the All India counselling process conducted by the Medical Counselling Committee (MCC), or through their respective state-level counselling processes, are confronting the same fears, making the case for a prolonged litigation battle more and more likely.

The CBSE’s decision to challenge the order is along expected lines. The Madras HC order, passed on July 10, had threatened to thrown the entire NEET 2018 counselling process into disarray, with the CBSE ordered to award grace marks to each of the 24,720 candidates who had opted for Tamil as their medium of instruction. While passing its order, the Madras High Court had agreed with the petitioner, CPI(M) MP TK Rangarajan, who had raised the issue of the Tamil translation of the NEET question paper containing a total of 49 errors. As per Rangarajan, the affected candidates should be awarded marks for each of these 49 questions. With four marks awarded for each correct answer in NEET, this translated to a total of 196 marks.

The CBSE was also ordered to publish a fresh merit list which would include the names of all of these candidates. With this year’s NEET qualification cutoff for Unreserved candidates being 119 marks out of the total of 720 (96 marks for reserved candidates), what this implied was that all the 24,720 candidates would now be eligible for MBBS and BDS admissions. With the first round of counselling and seat allotments under All India Quota, at Deemed and Central Universities, and most states already concluded, the inclusion of so many new candidates meant that the CBSE would have to conduct the entire counselling process afresh.

NEET 2018 was conducted by the CBSE on May 6 and the result was declared on June 4. A total of 12.69 lakh candidates had appeared for the exam, with 7.14 lakh candidates qualifying for the approximately 90,000 MBBS and BDS seats available through the exam. 12,679 candidates were allotted seats through the first round of All India Quota and Deemed University counselling, the results of which were published on June 23. The second round of counselling was conducted between July 6 and July 9, and the results of the same were expected to be declared on July 12. However, following the Madras High Court order, the Medical Counselling Committee issued a notice about the second counselling round stating that it would be “kept in abeyance till further orders”. States like Punjab and Tamil Nadu have also followed suit, issuing notices on the postponement of their counselling processes.

As reported by Careers360 on July 12, TK Rangarajan had already filed a caveat on July 11 with the Supreme Court in order to pre-empt the CBSE’s expected appeal and to ensure that any stay on the Madras HC order is not granted without hearing him. It remains to be seen how the Supreme Court rules in the latest hearing around NEET, an exam which has never been a stranger to controversy having faced its fair share of legal battles around various issues over the past two years. This propensity to attract controversy has been especially true where Tamil Nadu is concerned, with the state being a vociferous opponent of the exam since its inception. The latest controversy has only given it more impetus to seek an exemption from the exam. Any verdict issued by the Court in favour of the CBSE is likely to have long-term implications, especially given that the state is also against the recently announced changes which will be introduced to the exam from 2019 onwards.

Bihar Board Class 10 Scrutiny 2020 Application to Begin from May 29; Check details here

Kashmir University to promote students based on internal assessments

Students can appear for CBSE exams in their present district